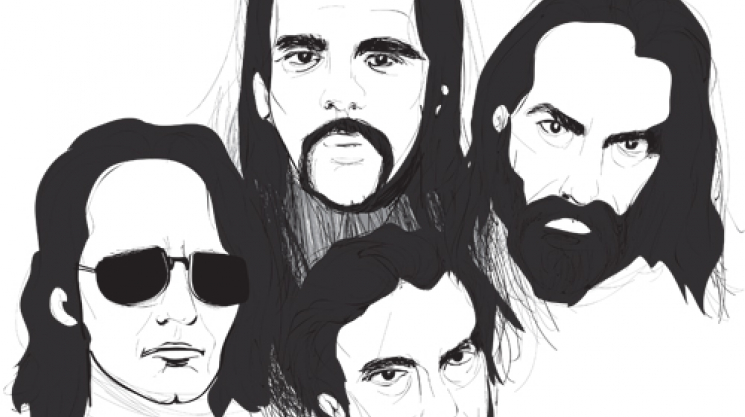 Warren Ellis, as it turns out, is two very different creatures: one is a ferocious warlock who throws high-kicks while performing voodoo on his violin; the other is a soft-spoken gentleman who is as thoughtful as he is thought-provoking (can you guess which of the two I interviewed?). The Australian composer and multi-instrumentalist first emerged in 1992 with his band Dirty Three. In 1995, he joined Nick Cave & The Bad Seeds, thus sparking one of the most prolific partnerships since Siegfried & Roy. Together, Warren and Nick composed soundtracks for 2005’s The Proposition, 2007’s The Assassination of Jesse James by the Coward Robert Ford, and 2009’s The Road. Their most recent project, along with Jim Sclavunos and Martyn Casey, is a band they call Grinderman. Similar to The Bad Seeds, Grinderman are Cohenesque poets of post-punk, filled with the spirit of gothic country and blues. With their second album, aptly titled Grinderman 2, they are proving true the great Eighties adage: Better an old Demon than a new God.

Starting with your first album with The Bad Seeds, Murder Ballads, your relationship with Nick Cave has taken on a kind of mystical form. Regardless of project, you seem to share the same mood, live inside the same myth. Where do you suppose that kind of coherence comes from?
We both enjoy that aspect of working together. And as long as it continues, we’ll continue. It’s a funny thing among musicians, you know, there’s not much talking that goes on about that stuff. I guess you just find out one day, when you’re not working with each other, that it’s no longer working. Some things don’t have to be made concrete to understand them.

Like any substantial relationship.
Any relationship. Whether it’s a lover, friend, or whatever, it should make you go into places that force you to be inquisitive. You just sort of know if it’s going somewhere, intrinsically.

So, how did you organize a band like Grinderman while keeping good relationships with your bandmates in The Dirty Three and The Bad Seeds? Did any hurt feelings come up as a result of being left out?
I guess we’re all a bit older now and we’ve been doing it for a while. I think anybody that’s making music, seriously, realizes that you have to do different things to keep interested. Fortunately I work with a bunch of people who realize that each project needs downtime as well as up time. None of the bands I’ve played in have been able to maintain themselves 12 months a year without burning out. Or maybe it just has to do with age.

So you think you’ve got the balance down?
Well, once a group gets established there’s a kind of shape to it. You make a record, tour, promote and then you break. This cycle gets established and if you can do releases in between, then you can get a record out every year and that’s great.

Traditional murder ballads flourished within the lower, “dirtier” classes, often from the point of view of the murderer. There’s still a sense of that in Grinderman.
Something’s in there! [laughs] The idea with Grinderman is that we go out looking for something that feels like nothing we’ve done before. It’s really about trying to open up and look for something. It’s a search. New worlds. We do these sessions for like five days where we just start banging away. We get everything on tape, from the really inspired to the absolute biggest pile of crap that you’ve ever heard in your life. Then we kind of sit back and pick through it ruthlessly for certain bits of moments. And we keep flicking and generally come away with a load of stuff, in this case with something like three CDs’ worth, and from there we decide together.

When did you know you were finished with this one?
When we felt excited. And when that passes we think about doing the next thing. But you’ve got to have that period of excitement. I have to feel like it’s going somewhere, even if it isn’t apparent to the people listening.
Especially when it’s the only thing that makes your life kind of complete.

Do you feel that nowadays you’re working with the music industry or against it?
Well, it’s just changing so much. It’s ludicrous for me to try and keep up. I mean, I was never in sync with it anyway, and these days it’s just a force unto itself, spiraling out of control with its own domain on the Internet and whatever. Hopefully I can continue to make a living in there because I don’t know what else I’d do. And I enjoy it along with the other things I get involved with. I know the climate’s changing and there are enough people scratching their heads trying to figure out what to do with it. Adding myself to that confusion doesn’t help anything.

Do you still go to shows?
Concerts? Yeah! I mean these are still for me—the places where things will only happen that one way, that one time. You see a real interaction. The last thing I saw was The Stooges. I mean Iggy Pop is not even human. It was extraordinary. I saw Lou Reed do Metal Machine and that was unbelievable, too.

How about new music?
My big problem is finding any new music. Knowing where to go because there’s just so much coming out and I don’t even know where to look. And there’s a lot of music that kind of affected me and formed me and I find myself still going back there because I know they’ll take me back to a place.

Like what sorts of things have inspired you most consistently?
If I put on a Howling Wolf album or Neil Young’s On the Beach or some Dylan or Cohen.

So, do you…
Or Bitches Brew by Mile Davis—a new world opened when I heard that. Nina Simone, too.

What about…
Or John Coltrane’s Interstellar Space—if you go there, there should be no coming back. You know, YouTube is so amazing because you see this stuff you’d never see in a lifetime, like Charlie Parker playing live. And it still blows my mind like it did the first time. I mean, what was life changing about them then is still life-changing. When I feel like I’m lacking the uh, mojo [laughs], I look back at that stuff, and I see that we all have a long way to go.

Hi, just wanted to say that I wrote this piece and wonder if you could credit the proper writer. Thanks!