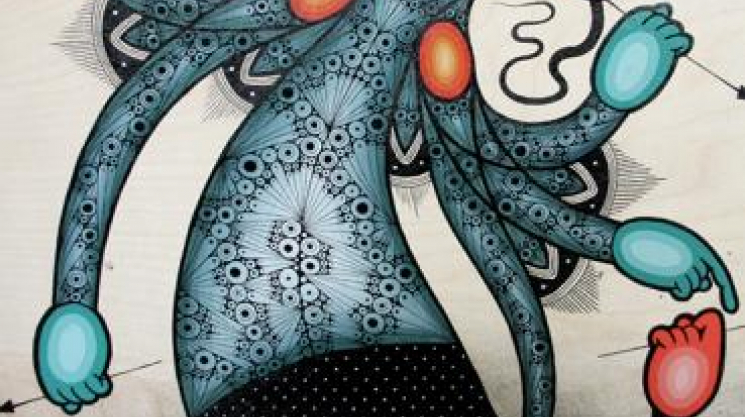 Our One to Watch artist for this issue is West Coast native ISAAC HOLLAND. We asked Karyn Gray to profile this natural born artist on behalf of ION.

What was your start? Do you remember the moment when you decided you wanted to be a designer, or teacher, or entrepreneur? For some, it’s a moment in time that they recall in great detail: the first time they saw Star Wars, translating 15 years later into admission into a film program; the first time a friend paid them for one of their handmade bracelets resulting in a career in jewellery design. For others, it’s a snowball effect, where one thing leads to another. A job opening pops up here, an opportunity arises there, and a bunch of years later they look back and say, “Golly gee! Who would’ve thought I’d end up as a [insert profession]!” Still, others have simply always known, or always been. There’s no moment of enlightenment; they just are that thing. Cali-born, Victoria-raised artist Isaac Holland is the latter.

This nature and pattern-loving graffiti writer, slash skater, slash West Coaster, slash East Coaster, is a whole lot of little things, but 100 per cent artist, and always has been.

Born in Oakland, California in 1985, Isaac moved to Victoria, B.C., when he was two years old. Growing up on Vancouver Island, he notes that he was surrounded by the natural world while still getting a good dose of urban life, something that would contribute greatly to his art.

On some level, he seems to have always known he was an artist. “I have been compelled to put medium to surface ever since I can remember. I could spend days on a project, whatever it may be. I used to draw giant maps when I was a kid and create whole worlds from my imagination, or spend days making stop motion claymations with crazy characters that would roll around eating each other. When I went to school for the first time I remember thinking, ‘Come on, man! Who gave these guys the right to interrupt my work schedule?’”

At 13, he spent a year living on Reid Island, a small gulf island with no ferry, cars, electricity, plumbing or running water. His parents owned a five acre property there. Though at the time he wasn’t too keen at the prospect of leaving his friends and living in the middle of nowhere (what 13 year old would be?), in retrospect he acknowledges the great impact it had on him.

“Living on Reid was an amazing experience that I believe has greatly affected my life and the way that I see things. I think it really gave me a real perspective on human verses nature, or really how separate we humans have become from nature. Life really slows down when you're out there in the thick of it and things just start to make more sense. You feel content with what you've got, instead of constantly striving for more. I developed a feeling of attachment to the earth that I’m not sure I would have if I hadn't spent that year on Reid. I still feel like I’m being healed in a way whenever I go back. I’m still a city boy as well, and I love the adventure that the big city can provide, but I think I look at things differently because of my experience there.”

It was right before he moved to Reid that he was introduced to skateboarding. He recalls, “Even though Victoria is a small city, it still had a pretty vibrant underground culture. I was a little young for the peak of the punk thing that was going on in Vic. (e.g. Dayglo Abortions, Red Tide), but what really brought me in originally was skateboarding. My first skateboard was from Toys R Us and I think it was about $25 for a complete setup. Just an awful skateboard, but it was amazing for me. It was the best feeling. I was addicted for sure. When you're a ‘skater’, at least back in the day, you could catch a lot of flack from the general public. In Vic. there’s even a ‘red zone’, a huge part of the city in which it’s illegal to skate. I think that’s where I got my first taste for, ‘Fuck the system, man!’”

It was through the skate world that Holland eventually found graffiti and was instantly hooked. “When I was 15 or 16 I knew I wanted to be an artist. Hell, in my mind I already was. I started going to class less and less, and started staying out all night climbing around, going to parties, learning as much as could about graffiti, while doing as much of it as I could. I was doing some pretty awful work back in those days, but I never wanted to give up. Even getting arrested multiple times didn't stop me. Nothing did.”

At the age of 19, he made a move to Calgary to expand his domain and have a few new adventures. He spent a year couch surfing and painting graffiti while holding down a job as a house painter - “No real shows by any means, but definitely the beginning of something” - before returning to Victoria and going to art school.

“There was a moment when I decided to go to art school. I was lying in bed in Victoria in my apartment on Fort Street and I was just coasting by, and it started to drive me insane. I had to do something, and art school ended up being that something. I needed a change and a challenge and that’s what art school was for me.”

He arrived in Montreal without having even been accepted to Concordia University, but was admitted soon after, thereby beginning his formal art education. Meanwhile, he recalls being amazed at the number of legal walls and graffiti spots in the city, and was excited that he could go out almost every day and find a new spot to paint. It was this point that he really started to develop his niche.

“My style really started to develop into something different when I arrived in Montreal, simply because I always had somewhere to paint and I didn't know anybody except my girlfriend, so I didn't have any distractions. In school I learnt about art history, the masters and all that jazz, but what I was really interested in was the old art from way back. The aboriginal art from all over the world and the pagan art from back in the day are what really attracted me. I think it’s the art that comes from real culture and tradition that I find the most interesting. What really appeals to me about aboriginal and pagan art is that it was made more for community, cultural and ritual reasons than the upper class or the hoity toity. It’s almost like art was religion. I like the idea that life is magic, and stories and art help make it that way. Art becomes a way to understand the un-understandable. Instead of trying to make sense of everything, you can make a painting and that becomes your answer. If you look at any culture, from anywhere in the world, some of their first art consisted of, or at least had elements of, some kind of patterning. I think that shows that somehow it’s in our nature to do this kind of thing.”

After years of honing his craft, incorporating his formal art teachings with his street education, his love and respect for nature, aboriginal and pagan art, with his background as a city kid, Isaac Holland has something truly unique to offer. His work is striking, and riddled with pattern and symbolism. In one painting, a man is recycling himself, feeding off of himself, and therefore self-reliant. The entire universe is within him yet he has to cut himself open to realize it. Meanwhile, each of his three heads, possibly vices, personalities or cravings, is vying for superiority.

In another, there is an old man with three heads. He has roots that are searching for a place to plant themselves, and in his hands are arrows that are pointing in all different directions. Though he seems to be unsure of what direction to take, he carries his house on his head; therefore, he is always at home. The face in this painting is Robert Williams, one of Isaac’s favorite artists. He muses, “I like to think of my paintings and characters as complete in themselves, but they also fit into a grander scheme, my body of work. When I paint, I just let my subconscious come forward, so I think that the paintings have more to tell me than I have to explain about them.”

He has organized and been part of several shows in Montreal, and is now branching out in his art by completing a tattooing apprenticeship, all the while still painting and moving forward.

“No matter where it comes from, we are compelled to draw, illustrate or put this stuff out in some way or another. It’s in us and it wants out.”

Hi Iaasc.
I was gifted your art last night at a fundraiser.
Does the piece have a name?
Thank you.