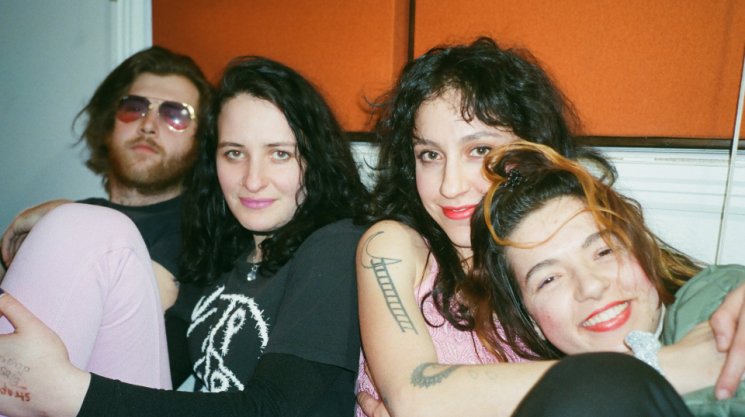 “Puzzlehead is a worldwide movement. It’s not just a band.”

Bold words from Katayoon Y., guitarist/vocalist for scuzz rock combo Puzzlehead, but considering she’s currently got a sprawling list of collaborators lined up in her hometown of Vancouver, as well as in Montreal and Olympia, WA, the project is already on its way towards enveloping scenes across the map.

Puzzlehead’s chief songwriter is walking around Montreal when ION first reaches her by phone. The snow has just started falling, and the cold weather dip is causing her cell to fail—the musician’s voice is left muffled, distorted. Unrecognizable. She calls back a few moments after finding shelter to explain that despite this pre-winter chill, she and drummer Olga A. are fired-up to reveal the live-wire riffs of their debut LP, Big Sniff, at a record release party. Technically, they christened the collection at a Vancouver release show last summer, but Katayoon explains that Big Sniff is ultimately a product of La  Métropole.

Last year, after wrapping an East Coast tour, Katayoon and Olga temporarily relocated to Quebec. The amorphous, ever-changing structure of Puzzlehead evolved to include guitarist Kristian North and bassist Marlee M. The Montreal line-up’s Big Sniff, recorded with René Wilson, is an intoxicating bouquet of blister-popping rawk and cotton cloud vocal production.  Of its many highlights, “Cruisin for a Bruisin” begins as a playful garage go-go, but mutates into the cyclical numbskullery of a doom metal riff. It ends with a sneering mantra of “I’m going to kick your ass.”

Other Big Sniff soundscapes pay homage to the fumes-huffing swagger of Cats & Dogs-period Royal Trux (“In My Fantasy”), and the ghoulish Death Valley churn of mid-80s Sonic Youth (“The Carpenter”). From a visual standpoint, the Katayoon-directed clip for “Carpool” is a shambolic celebration tipping its hat to the champagne-clinking excess of Madonna’s “Music” video; the degenerated VHS static stretched through the video for “Moist Towelette” is a shout-out to illegal Iranian pop music transmissions she watched in her youth. Most omnipresent, vis-a-vis the Big Sniff’s many chaotically bended guitar solos, is the inherent ridiculousness of playing rock ‘n’ roll as we approach the 2020’s.

“I think playing in a band—playing an instrument, even— is so archaic,” Katayoon says with a self-effacing laugh. “It dates me. With technology these days, there’s no reason people should be setting up drums, or making a string vibrate. It’s so stupid! I feel like people that make rock music are like these weird anti-vaxxers. I feel like I’m on the fringes, holding onto this ancient technology”

While Katayoon may paradoxically cling to her six-string (“Maybe this is just who we are, I don’t know. I’m still trying to fight it!”), Puzzlehead’s scope is defiantly open-ended. Depending on the mood, locale, and available musician pool, they’re just as happy to wail away with full-band abandon as they would be to strip things down as a subtler guitar-and-synth duo. With altered factions already existing across North America, the possibility of another Puzzlehead popping up somewhere around the globe certainly isn’t without precedent. When the conversation drifts towards the idea of franchising her punk band, Katayoon contemplates what Puzzlehead would sound like without its de facto leader.

“I think a franchise would be good,” she says, before adding dryly, “The only problem is we’re not turning a profit this quarter, so it’s really hard to sell this idea.”

Still, she toys with the thought, noting: “One thing any of the band members will tell you is that I don’t like practicing. I don’t like playing the same songs over and over, it bores me. I already wrote them. If I could just have a thousand dollars, you can have one album’s worth of tab, the logo and the t-shirt design. You can book shows and use that name. But you also have to have your own ‘me’; I won’t be in the band.”

After a brief pause, Katayoon sweetens the deal for prospective franchisees looking to buy into the Puzzlehead movement: “For two thousand dollars I’ll come and play a show.”