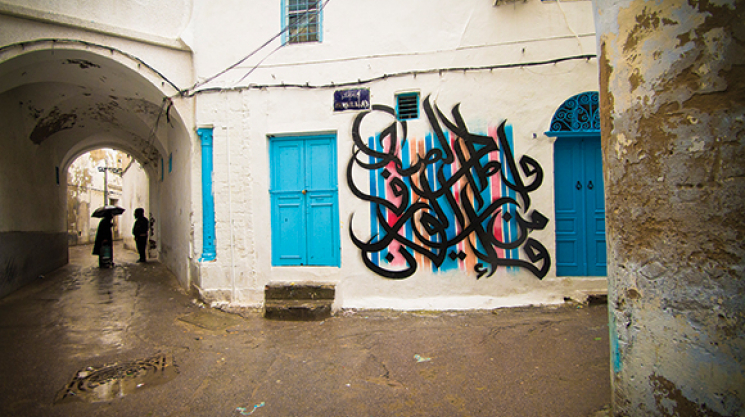 eL Seed | The Writing on the Wall

While each of the following artists (Marko93 / Garbage Beauty) have developed variations on the calligraffiti style, they each share the respective goal of bringing people together on the same level. And there’s nothing more human than an innate desire to create something that lasts—to shout unapologetically into the void and hope that, just maybe, you’ll be heard.

eL Seed exists on a plain that would once have been considered amongst the highest ranks of society: he’s a self-made master of Arabic calligraphy. His writing is visually captivating and experimental; the sweeping strokes of his letters take on mesmerizing shapes, defying traditional calligraphic rules and setting new precedents of their own.

A French-Tunisian street artist who was born and raised in the streets of Paris, eL Seed spent his teenage years feeling as though he existed outside the French culture. “I didn’t feel French, really, and I needed to get back to my roots,” he said. “My roots are in Tunisia, so...I started taking some nightly Arabic classes in Paris, and then I discovered calligraphy.”

Arabic calligraphy is an ancient and sacred art form; “there are rules you need to respect,” says eL Seed. Typically, each calligrapher learns to write from another calligrapher, who was taught by yet another calligrapher before him. According to eL Seed, “It goes from generation to generation, and dates back approximately 1400 years.” But, perhaps unsurprisingly, there weren’t many calligraphic masters in Paris in the late nineties, so he taught himself. His own—now instantly recognizable—style was thus born not only from practice, but also out of the fact that he was unaware of conventional letter shapes and formal rules. Instinctively, he thought to combine the sacred art with one that was just emerging within the American hip-hop scene: graffiti.

By uniting the two mediums, eL Seed became a modern ambassador of the Arabic culture, who used his art as an attempt to show a different, more positive image of his people, unlike the one he sees as being typically portrayed by the media. His goal is to “bring people together, to inspire people to come together; to build bridges through walls.” And what better way to do that than by using language atop actual walls to knock down the theoretical ones?

eL Seed favours the unexpected above all else. He won’t paint on clean walls—he loves old, run-down locations that tell a story, that have something to say on their own. “I don’t even care if my wall will be seen,” he says. “Once, I was in the south of Tunisia and I asked some Bedouins to guide me so I could paint in the middle of the desert. We drove for 45 minutes; I swear I wouldn’t have found my way back if they weren’t with me. Maybe one day somebody will see it and they’ll be surprised to find it there, you know? That’s what I love—putting art where you least expect it.

But there’s a method to his madness. Each work is tailor-made to fit the culture of the city he’s in. “Everything I do is a message,” he says. “I try to take a message that’s relevant to the people living wherever I am.” His personal favourite message was drawn onto a minaret of the Jara Mosque in his hometown of Gabès in the south of Tunisia. Though controversial, the mural was approved by the mosque’s Imam; its goal is to unite art and religion, and to convey that the two can exist harmoniously.

“Because it was a mosque, I picked a verse from the Quran,” says eL Seed. “It says, ‘All humankind, we have created you from a male and a female and made you into nations and tribes so that you may know each other.’ There was a certain political context in Tunisia at the time, and the goal was to bring people together. What I like is that it was a verse from the Quran, but it wasn’t addressed only to Muslim people, it says ‘all humankind,’ so it’s really a message for everyone.”

This strategy of tailoring a message to the residents of any given city is a potent reminder that we’re all living the human experience, regardless of cultural, religious, or linguistic differences. Graffiti, and language in general, brings people together in their respective experiences of the world. But some people are happier living life with their eyes closed.

“Once, I was painting this wall in Paris—this guy had donated his wall to the event, and said any artist could paint on it,” he says. “But when he saw that I was painting Arabic, he was so mad, he said he never asked for this shit. He showed the stupidity that some people have. So I left. But a week later, the organizer of that event said he had another wall for me, and it happened that the wall was right in front of that other guy’s house. So I wrote ‘Open your heart.’ I hope it will be a reminder for this guy every day to open his heart to others.”

According to eL Seed, people shouldn’t forget where they came from, but should also approach other cultures with open minds and hearts. “I’m trying to inspire people to get back to their roots and put their heritage—their history—to use,” he says. “If this mindset becomes global, eventually people will be able to appreciate everybody’s culture. That’s the point.”