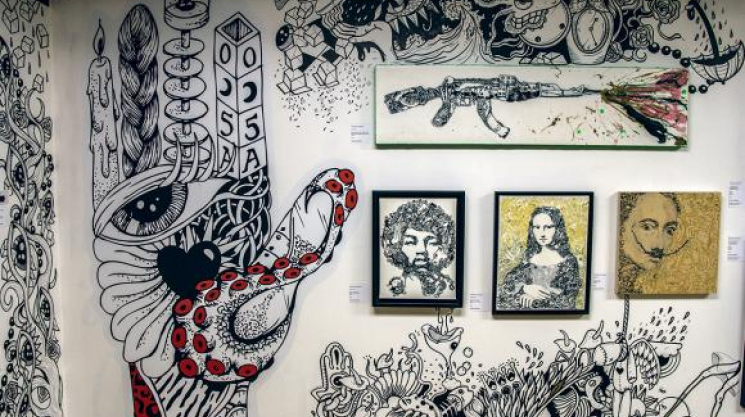 The way I see it, deciding to be an artist is sort of like deciding to move to Montreal. In theory, it seems like a wonderful, brilliant idea. The city is beautiful, full of culture and art. The food is amazing. The festivals are world-renowned. People sip coffee in quaint little cafes, and have picnics of wine, baguette, and cheese in the park (It’s not just a stereotype. We really do that!) What a fabulous idea, moving to Montreal! But there are elements that you discover after you’ve settled in that aren’t quite what you bargained for—the politics; the potholes; the language debates; the taxes. Not to mention that ugly beast called “seven months of winter.” Not everyone has the stomach for it. Moving to Montreal for the long haul takes perseverance. It takes love. In the middle of winter, you might panic, or cry, or yell in frustration that you’re throwing in the towel, but then a funny thing happens. You develop a kinship with your fellow Montrealers over your mutual struggle through that bitter cold. And you become proud of it. Proud of your ability to adapt and persevere. And when the spring thaw comes, the streets come alive, the creativity flows, and life seems that much sweeter. That’s how I envision the artist’s journey. While their styles are completely different, Cgo, MC Baldarassi, and Johanna Reynaud are three artists who, aside from their French heritage, do have two things in common: they each took the plunge geographically in making the journey to Montreal, and they took the plunge professionally in making the journey of being an artist and doing what they love.

Cgo is a French illustrator from Montpellier, South of France. Her work is deeply inspired by traditional tattoo design worn by old school sailors. Though, technically, much of her work is computer-based graphic design, she considers herself more of an illustrator—and black and white illustration is her favorite domain.

Much like the graphic language of old school tattoo design, her work has a certain simplicity that, although clean and achromatic, is rife with symbolism—arrows; eyes; bones; wolves. These are just a few of the recurring themes that Cgo plays with in her work. “I'm very sensitive to nature and animals. Some friends call me ‘Brigitte Bardot!' It's an important cause that I support, and a nostalgic one, and this sentiment can be seen in much of my work. It doesn't mean that I can’t draw something happier. It just depends on my mood. […] When people look at my artwork, I don't want them to just notice a missing arm, or too many eyes on a face. I want them to have experienced a story, to have given names to my characters. That's what I imagine when I draw.”

For Cgo, her progression as an artist has been a natural one. Her passion for art and illustration led to her pursuing a formal education in visual arts—something that has helped her gain new techniques, define elements she likes the most, and evolve as an artist. In terms of mentors, she credits Sarah Patroni, a painter influenced by the cubic movement—with whom she used to share a workshop—for encouraging and believing in her, including urging her to exhibit her work. As with pretty much anyone in the arts, there is a necessary and unavoidable element of “putting yourself out there,” accepting praise, yet also facing criticism. When asked if she ever experienced any memorable moments of uncertainty or fear in this respect as an artist, she reflects, “Sure, it can probably scare people. But I actually wonder more about the artist’s status. Who tells you, “Okay, now you’re an artist”? To me, it’s difficult to define. Maybe some kind of modesty? Who knows! Yes, I’ve already had, and still have, moments of uncertainty and doubt about my professional path. Maybe that’s why I often make my characters cry in my drawings [laughs]. I think it’s good to have these feelings… but not too much, of course.”

In the past, she has participated in a variety of collective events and exhibitions in France, and was always received warmly by both artists and the public there, and looks forward to all the opportunities that Montreal has to offer. She notes, “In Montreal, events are different, but I like to meet other artists and try to plan collective events, share our ideas, and have fun.”

In terms of pieces that are especially near and dear to her heart, the lithography series she made at the Berville workshop in France stands out, in which she mixes the mythology surrounding Poseidon and Amphitrite, and a representation of Pandora’s Box: a tragic love story where beauty and fear are so closely intertwined. Also of note is the “Four Eyes of Wolf” that she made for her boyfriend’s EP, that he then got tattooed—meaningful not just for the symbolism of the drawing, but for its transformation into tattoo form, a medium she says is as important to her as drawing. A representation of the stories of our lives.

MC Baldassari was also born in France. She moved to Montreal in 2007 to study Industrial Design at the University of Montreal. After receiving her Bachelor degree in 2010, her passion for drawing led her to explore the world of illustration. Four years later, she’s a full-time freelance artist, always looking forward to new and interesting projects.

“My primary medium is a simple pencil and a piece of paper. Sketching the first draft is my favorite part of the creative process. When people ask me what I do, I reply that I’m an artist-illustrator, and when they look at me with this weird look full of questions, I simply say that I draw for living!” She muses that being an artist can be the best job in the world, when you forget the first couple of years—the years when you don't know if you'll be able to pay your rent. “I remember crying like a big baby and trying to find other ways to earn money and be able to keep practicing my job and my passion. I have to say I’m also very lucky because I’ve always had someone believing in me, and kicking my ass when I needed to.” For her, and probably for most, the biggest part of the job at the beginning was perseverance and passion. Not being able to find a job in Industrial Design, where she could primarily draw or sketch, she gradually began taking on the odd contract until full-time freelancing became a reality.

While the beauty of Cgo’s work lies in its simple black lines, MC’s signature style is a fluid mixture of sharp angular patterns, with soft, sweeping elements, subtle colouring, and feminine imagery. “Most of my subjects are female characters. It's funny because when I started to draw for myself at the very beginning, all my doodles were men. I think my drawing and inspiration has evolved with my personality and the fact that slowly, I have become more feminine...because I was a real tomboy a few years ago! What’s fun about my job, though, is that because it’s guided by my customers, the illustration side makes me draw a wide variety of things: different animals, vegetables, environments, objects...I think it’s a good way to practice and increase my drawing skills.”

Subject aside, she asserts that if there’s anything that she’d like people to take away from her work, it’s pleasure, both for the eye and for the mind. She goes on to state that she’s not trying to express any sort of big political or social message through her work. Instead, her intention is simply to be happy in what she does, and to bring happiness to people observing her drawings.

She singles out “Toxic Woman” as one of her favorite pieces. “I think ‘Toxic Woman’ is really significant for different reasons. First, the piece of wood I drew it on is amazing. It’s the most beautiful piece I found on the street. The size and the texture were perfect and, honestly, that made 50 per cent of the job. It was really fun to draw on. The second reason is that my boyfriend is now its owner. He’s a computer geek, and used to like only really pure and simple aesthetics—art really wasn’t his cup of tea. The fact that he owns that really dirty and textured piece of art is my proof that I made him sensitive to something different. Now I know that anybody can love art! We’ve had this piece on our apartment wall for three years and I haven’t wanted to throw it out the window yet. I mean, when it’s your art, you quickly get rid of old pieces because you just can’t stand them anymore. It didn’t happen with this one… yet!

Johanna Reynaud, a.k.a. Gribouilliz, grew up in Martinique, a beautiful island in the French West Indies. She had visited the city as a teenager and totally fell in love with it. She came to Montreal in 2000 to pursue her studies. She calls Montreal her “island in the north.”

With a mother who is an artist, Johanna was always exposed to art in many forms. “I didn't know I was going to be an artist, but I also knew for sure that I wouldn't be a doctor. I started studying interior design, and one morning on my way to school I simply realized that I didn't want to draw as a hobby anymore, but as a profession. That same day, after asking my mother permission, I dropped out of the program, and a month later I was in a graphic design and illustration school. That's the best decision I've ever made. I am so glad that my mother was supportive of my decision. So many people struggle to even find what they want to be or do. The scary thing would be to fight against something when it comes so naturally to you, because it truly is a blessing. There are moments of doubt on every road you take, and life will always test you. You just have to be focused and willing enough to stick to your goals and put in the right amount of work and dedication. There is no secret. Attitude is everything.”

She works mostly with markers on canvas, but is hoping to integrate acrylic paint into her next pieces, as she feels the bold and saturated colours would complement her work. When asked what she does for a living she usually answers “a graphic designer and an illustrator” because of her everyday job, but mostly because she feels “being an artist” doesn’t refer to what you do so much as who you are.

Though not necessarily her favorite piece, her portrait of Salvador Dali–an artist she has always admired–stands out as having special significance for her. “I had been struggling for hours on the expression of his face, doubting and hesitating. I was so insecure that I did the entire piece and left the face blank for a couple of days. At one point I don't know what happened but I just told myself, "Fuck it. Just feel it and go." That's what I did, and I'm pretty proud of the result. I realized that I didn't have anything to prove to anybody. At that moment it was just me and what I love doing, and it felt so precious. From that day until today I always try to put myself in the same headspace when working on anything.”