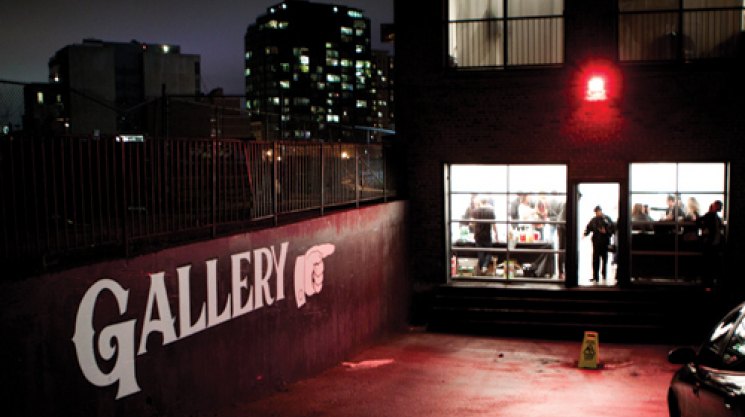 The Goodfellas Gallery, in the Queen Street West area of Parkdale, Toronto.

Tell us a little about Parkdale…
Parkdale is one of Toronto’s only authentic neighborhoods left. I can’t think of another area where you can get this kind of free entertainment. It is like a circus with no admission. The people accept everyone and it is home to more artists per capita than anywhere else in Toronto. Tyler Tilley (artist of the Next Level Art Collective) and myself really wanted to get on board with the other local businesses to assure this gem reaches its full potential. The buzz that has been created so far around the Queen West area is phenomenal.
Tell us about Goodfellas Gallery…
Since we were already dealing in high end real estate and commercial design, we felt it was time to open a space that focused entirely on rejuvenating art in commercial spaces and joining some of the other inspiring local businesses in bringing awareness to the potential of the neighborhood.
The gallery is in a warehouse, attached to a studio I run called 36 Chambers. In the studio we house a total of 36 artists some of which will be in our line up for 2012 exhibits. The gallery entrance greets you with two giant full view glass garage doors which used to be the shipping and receiving area for Usher’s Groceries back in the ‘70’s. The floors have been re-done with 1-inch thick raw pine and the space was broken into two tiers. The main two walls stand 13 feet high which is ideal for exhibiting large-scale work.
So you are the curator, who else is in charge?
There’s the director, Hitoshi Murakami, and Tyler. We all come from walks of life that shouldn’t be talked about, and if I told you how artists were selected we would all be swimming with the fishes…
Ha, ha, ha. Okay. Well then, tell us about the shows…
We hold 12 exhibits per year; I would say 90 per cent solo. We have an exhibit called By the Pound that’s one of our only group exhibits that features over 100 artists and almost 300 pieces of work. At the opening reception, work is literally weighed and sold by the pound. The reason behind this exhibit is to make a point of the importance of obtaining quality, original artwork rather than a mass-produced print you would get at a local department store. To explain our point, it’s like comparing art to meat in the sense that quality and long-term happiness is important to the consumer. Typically, you would purchase your meats through a local butcher to obtain the best cuts and quality, rather than the local grocery store providing pre-packaged and sometimes frozen meats. Although the initial cost may be a little more, the long-term reward is greater than the cost. In the sense of meat, you have invested in your health and wellbeing. In the sense of art, you have invested in an original piece of work that over time has the potential to rise in value. And, you have supported a local artist and given them the opportunity to continue doing what they love.
Alright, now the big question. Who is your pick of artist to watch for 2012?
If I had to pick one upcoming artist to push on collectors that is worth investing in, it would have to be Tyler.
Tell us a little about Tyler and his work…
Tyler has this way about him that is truly genuine. The emotion and energy that goes into his work is unlike anything I have ever come across.
It’s a rarity to be able to meet someone for the first time and really be able to trust and confide in a complete stranger. What I get from Tyler is that he is not concerned so much about the “now” as much as he is on the legacy he intends to leave.
One of the first things I found out about Ty is how he started painting.
He boxed as a lightweight a while back, and like most boxers, the night before a fight he had so much energy, emotion and focus built up inside him, making it difficult to relax and rest for the big day. He discovered a release by throwing a canvas down and some paint on it. All that pent up fight inside him that came a day too early could be dropped onto a canvas, and rest could be had. Tyler Tilley never lost a fight and he held onto that technique and applies it to all aspects of his life.
Above and beyond all the amazing stories I could have been told, his pure passion for art makes it impossible for him not to spread the word, almost as if it were a religion or cult.
I’ve watched Tyler turn what started as a form of therapy into a fully functional operation. I’ve watched his hobby turn into a passionate lifestyle. But when you put yourself around him, it’s clear you haven’t seen anything yet.
Tyler sounds rad. Can you tell us where we can see him this upcoming year?
I am pleased to announce that we will be featuring Tyler Tilley in September 2012. The exhibit will also feature the rest of the Next level Art Collective, which he co-founded in 2009. More exhibition details can be found at the Goodfellas Gallery website:  goodfellasgallery.com