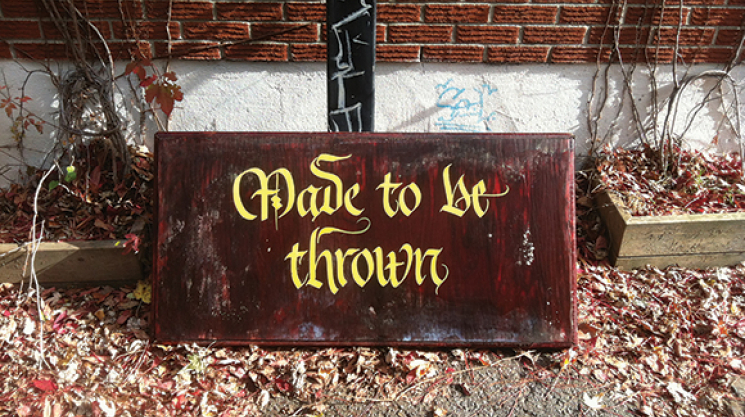 Garbage Beauty | The Writing on the Wall

While each of the following artists (eL Seed / Marko93) have developed variations on the calligraffiti style, they each share the respective goal of bringing people together on the same level. And there’s nothing more human than an innate desire to create something that lasts—to shout unapologetically into the void and hope that, just maybe, you’ll be heard.

Montreal-based Garbage Beauty is an up-and-coming calligraffiti collective that hit the scene three years ago and is rapidly becoming known for its unique take on the traditional letter form. Unlike eL Seed and Marko93, the members of Garbage Beauty studied a Latin-derived calligraphy, writing short messages on pieces of garbage and disposed furniture they find in the streets. Inspired by a similar group in France called Trash Lovers, founding members Vincent Box and Romain Boz started their own group after discovering calligraphy in a magazine; they started taking classes, and their friends Olivier Rielland Nadeau and Étienne Savaria soon joined the mission.

Garbage Beauty uses calligraphy because it’s simultaneously the foundation of visual language and an extension of modern art. Each of its members studied graphic design; for them, writing by hand is a way to return to craftsmanship. “It’s a master graffiti form; a more pure form of lettering,” says Rielland Nadeau. “It’s the foundation of the handwriting and letter forms we see today. And calligraphers are like sensei. They only take students who respect the rules.”

Calligraphic writing may be traditional, but that’s about the only aspect of their work that could be categorized as such. By writing on broken mirrors, television sets, couches, and other deserted items found on city sidewalks, Garbage Beauty hopes to both give these items new lives and to comment on today’s consumer culture on a more literal level. They take that struggle to define the human condition and apply it to garbage, personifying objects that otherwise would be overlooked. “You can find garbage everywhere, and you can easily build a story around the past life of that piece,” says Boz. “We discovered that we could allow these pieces of garbage to have one last speech.”

In itself, this is a sort of reflection of humanity today: our things are so much a part of us that they almost take on lives of their own. “We choose pieces that obviously have led a past life,” explains Rielland Nadeau. “It has to have a soul. We don’t like IKEA shit, we go for stuff that has personality, stuff that has something to say. If it has life behind it and that life is combined with calligraphy, which has its own story, we can make something others regard as garbage into a new, more interesting creation.”

Clearly, then, what they choose to write isn’t arbitrary; instead, they’re expanding upon what the object already says on its own. But while their work is, in essence, a direct message to the public, each message is chosen meticulously to allow viewers to interpret them in their own ways. By speaking through their work, they want others to come to their own conclusions.“The most important thing is that we don’t want to tell people what to think,” says Savaria. “We’re not shooting propaganda or trying to show our political ways. The message lies in how each person will interpret the words.”

While each object speaks for itself, Garbage Beauty uses calligraphy as the underlying formula that adds a permanence to contrast the transience of their chosen medium. “Calligraphy is something that’s not say mathematical, but it has a formula,” says Rielland Nadeau. “The only changing factor is our support. That’s the fun part, you never know what you’re going to get, and that’s really what’s behind all of our concepts. Words have a personality, and you can emphasize that personality with the way you write; writing is just the visual part of language. The way you manipulate writing is the same as the way you’d manipulate your tone of voice if you were speaking out loud. Writing is something that wears a T-shirt in the summer and a hoodie in the winter. It dresses up to fit the context.”

“And calligraphy is really good for your inner peace,” adds Boz. “It’s based on your breathing, so it’s kind of like meditating. There’s a correlation between what your brain tells your fingers, what you write, and what your eyes see. It’s sheer will, and it makes you grow.”

The impermanence of their chosen vessel—garbage—is a conscious attempt to resonate with their viewers and make them think. Graffiti written on walls has become so much a part of society that we don’t even always notice it anymore—Garbage Beauty has found a way to navigate around that obstacle, while at the same time aiming to make their messages resonate with each viewer on a personal level. “I think another strength is that you don’t necessarily give a lot of attention to garbage,” adds Rielland Nadeau. “It’s not something you usually look at. To have something beautiful on something ugly, that’s a big contrast, and it’s always a surprise.”

More than anything, though, Garbage Beauty is a project that allows its creators to get back to the human experience; it’s a connection to life before the digital age. “For us, it’s a way to remember to play outside, to get away from computer screens and out into the world,” says Rielland Nadeau. “Some people are so lost in their own minds that they’re just looking at the ground in front of them and they’re not curious anymore. They don’t take the time to look around. When we see somebody­—who is really caught up in thought—stop and look at our work, or even just look twice at it, it’s like a victory.”