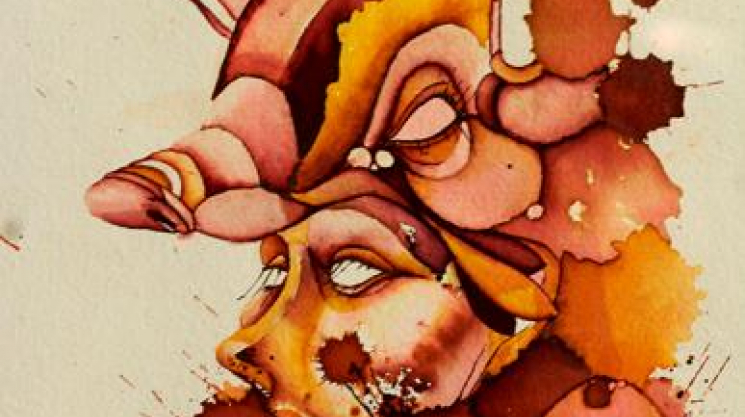 Some of the world’s greatest works of art were commissioned and acquired by the Catholic Church, and to this day the Vatican still has large amounts of work in their vaults. Murals from the 1400s, masterpieces like the Sistine Chapel, were meant to spread the word of God. Although the Church may have lost its influence, along with many of its followers, over the last few decades, it is clear that using art to tell a story was used to it's fullest potential by the Church, and that Gawd still works in mysterious ways. It is said that Gawd is a man of few words, and creates in his own image. We asked Matthew Perrin and Melissa Proietti, an old friend of iconic street artist Gawd, to speak with him about his work and inspirations, and find out what he’s been up to.

Knowing Gawd is something a lot of people may claim, but how can one really know Gawd? Gawd is larger than life and yet still visible in our daily existence. We have both known Gawd for a good 10 years now and it’s been an interesting experience; it feels like seeing the light and the many colours in his creations. Although this is not referring to a particular religious experience, we have both always admired Gawd and his handiwork and thought more people should come to know him. Knowing this Gawd does not require any type of Sunday commitment, but the communication with him can be tricky and require patience and focus.

The things we know about Gawd are unique and personal, like the fact that he is a vegetarian, and that he is known to seemingly disappear for weeks at a time whether it be for seasonal work, travelling abroad for shows or just hunkering down in production.

A painter and musician, from the outskirts of Montreal, Gawd’s work is a welcome sight on the street or in a gallery, his Dali-esque, mind-altering paintings jumping out at passers by.

Gawd is a man of few words; his paintings and music probably do most of his talking. But if you want to know the truth straight from Gawd’s mouth to your ear, well you better read closely and open your mind to the wisdom being shared. There is only so much that mere words can do to describe the infinite possibility Gawd’s work represents but we will do our best to scribe the intricacies of his thoughts.

What could possibly inspire Gawd to create? Well the deep vastness of outer space and the endless boundaries of the universe are where these images first begin their journey. They are conceptualized through a haze of light and clarity, and appear in the form of a painting on a street corner, on a train, and in galleries worldwide.

Gawd does not discriminate in medium, why would he? He can paint or create a universe from a bang; there is no physical material that could dwindle any of his desired production efforts. Gawd has shown me on numerous occasions that whether it is a pencil, paintbrush, or microphone, Gawd’s power comes through expression and creation.

We asked Gawd about the importance of friendship, and the importance of working with others in order to accomplish something wonderful and unique. Gawd has shared that he actively participates in his own collaborations with others who may be equally recognized in the community. Labrona is a name that was given to me from Gawd’s book of knowledge and experience. The work they have done together can be quantified as important to Gawd, and on this we should meditate. Gawd is humble, he is in no rush to create further physical material for us to enjoy, but we can be certain it is on its way.

The quiet and not so quiet moments we can spend with Gawd are enjoyable. His presence resonates with those around him, and his ideas can be spread with a simple walk around the city and an appreciation for what is beautiful. Gawd does not discriminate, his work is there for all of us to relish.