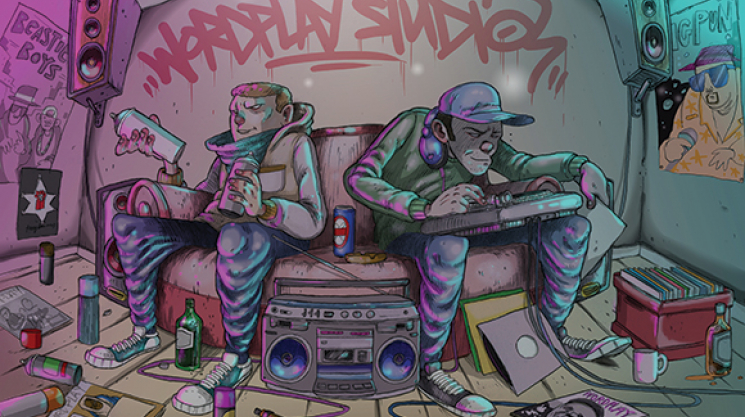 Immune, Ltd. is a multidisciplinary collective based out of Brighton, UK. Imagine a happy meal of illustration, motion design, hip hop, and Bukowskian grit. Co-founders and co-artists Gustav Balderdash and Bukioe talk about teaming up, the limits of labels, and the ups and downs of the art game.

You guys have been in the art game for a while now. Why did you recently decide to team up to form Immune?
Gustav Balderdash: We've been working alongside one another for about 10 years, competing with each other, drawing in sketchbooks, exhibiting artwork in various places around the country, and collaborating on illustration and graphic design projects. We share a similar world view and work ethic, so we decided to combine forces officially under one banner a year ago. Immune is a work in progress emerging as a result of that.

Bukioe: We always wanted a name that would represent our combined styles, humour, morals, and ethics. Immune came about after many years of brainstorming and development. When we settled on the name, along came the logo, and an identity that we had shaped, that represents us, and that we want to represent. It’s always beneficial working with someone whose opinion you trust fully. You know each other, and that way you can't bullshit when it comes to the important stuff. We’ve known each other for a while and we’re pretty much on the same path when it comes to work.

I imagine it can be frustrating, or at least ineffectual, when people ask you to label what you do, but how do you answer the “What do you do” question, especially considering your art spans a variety of genres?

GB: I've never wanted to limit myself to one specific type of creative output, and the saying "Jack of all trades, master of none" has never quite agreed with me. Usually I sum myself up as a motion designer and illustrator. That covers most of what I like to do, but I don't know if it's a good idea to define yourself by your chosen medium. Personally, I think the ideas are the important thing.

B: I normally refer to myself as an illustrator, as illustration always plays a large part in my work. I don't really make a distinction between the labels, but I look at the function. For example, I could say that I’m a graphic designer because elements of my work are design based, but I don't specialize in technical design. I guess it comes down to how you feel comfortable labelling yourself.

Being an artist isn’t renowned for being the most stable profession. There’s a great deal of hard work, hustle, a need to adapt—and, of course, talent. Do you ever feel intimidated, or do you just roll with it?
GB: It's easy to get disheartened, especially with so much access to other people's work online. A lunch break of browsing design blogs or your Behance stream could take the wind out of your sails at times, but any task can be broken down into smaller chunks. I think of it like Andy Dufresne with the rock hammer, or like freeze-thaw weathering. It's about time and conditions. If you can give yourself the time, and maintain the right conditions, varied input and considered output, it should work. As far as moments of uncertainty, I'd say always and never. I find it hard to pinpoint one specific moment of uncertainty, but it's always there when I'm working, like an annoying shadow.

B: It’s definitely a big step. Creative work can be so personal, and if people don't want you it can really dent your confidence. You have to have thick skin, and knowledge of your market. When deadlines start stacking up, and you’re feeling mentally exhausted and uninspired, it’s easy to think about a different career path. “Why don't I just get a job as a (real) estate agent? Play Xbox in the evenings and go to the gym at the weekend?” I remember feeling particularly fed up when we spent a night painting the wall of a bar. We started just before midnight and painted through until the following afternoon. Our backs were aching, we were hungry, and sleep deprived, but once it was done you pat yourself on the back, drink a beer, and then think about what's next on the agenda.

You work closely with musicians and beatmakers. How does music influence your craft?
GB: I've been listening mostly to hip hop since I was a kid, so I'd like to think that some of its recurring themes, such as being independent, creativity, competitiveness, striving for perfection, and being original, have affected me and my work.

B: I do a lot of album artwork, mostly hip hop. At times it can become quite repetitive because people are always after the same thing, or want you to include the same images—speakers, records, microphones, turntables, wires, and bottles. I get sick of drawing the same things, so for my own sanity I'll take their idea and interpret it in my own way, hopefully convincing them to go with something a bit different. Music is also a big part of my creative process and I take inspiration from all sorts: jazz, country, really cheesy funk—whatever's good, really.

What do you like people to take away from your work in general?
GB: It depends on the piece. Sometimes I'd like something to make them think about their worldview. Other times a chuckle will do.

Since you’ve started Immune, what are you most proud of? Is there a specific piece or moment that stands out?
GB: I'm most pleased with the brand itself. The idea evolved for a long time. To represent complex ideas through a minimalist aesthetic is one of its strengths, of which I'm quite proud, but I find it difficult to stay content with an individual piece for a length of time. […] Immune is only a year old, so I think most of our big milestones are ahead of us, but starting up was good times. Getting the website up and running was pretty cool. Working abroad is always fun, so painting a piece in Lyon was a good one. This month we get to see our first fashion feature published in the UK's best hip hop magazine, Wordplay, and have our first feature in an overseas publication—the one you’re reading right now! And next month we'll have our product available in UK stores.

B: I’m really proud of the Immune introduction video. When I first saw it I got really excited and felt very proud. The video sums up a lot of what we're about, and represents all the time we've spent creating it. It’s always nice to get recognition and acknowledgment for your work, but as far as Immune goes, the response and support we've received already is amazing.