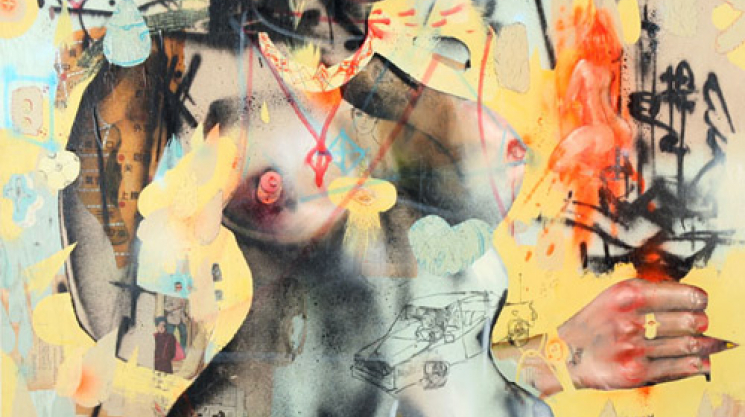 David Choe is someone you should get to know as he’s one of the most talented artists around. His work can be seen in galleries all over the world, Facebook headquarters, the White House and alleyways behind convenience stores. He recently released a 288-page monograph with Chronicle Books that needs to be checked out for the introduction alone (it consists of disses he found by Googling “David Choe”). We had a chance to do an interview with him via email and jumped at the opportunity. Normally email interviews suck and we try not to do them, but we made an exception because David Choe is as good a writer with a keyboard as he is with a spray can.

Why is 2010 a good year for David Choe?
I got to eat whatever I want and get the fattest I’ve ever weighed and still meet the girl of my dreams (and then, of course, destroyed it). I won the most amount of money in the universe gambling with my best friend Harry, I made the most amount of money from selling paintings, I got Dan the Automator to help build me a music studio, I got to walk my parents into a mansion and say to them “this is yours.” Besides that everything is fucking shitty.

Your book has the most entertaining introduction I’ve ever read in art book. Clearly you don’t give a shit what other people say about you. What’s the best slag of yourself you’ve ever read?
That my art = AIDS, which I actually take as a compliment, AIDS has devastated many countries and communities all over the planet, and I plan to do the same with my art. And by the way, I do care what people say. I was crying my eyes while putting that intro together, you might even be able to see some tear stains.

Superheroes are prevalent in your early work. Who is the best superhero and why?
Me. I got a secret hideout, I have super friends, I have a million disguises, and aliases. I can turn invisible, sometimes I can fly, but really low to the ground and only backwards (like ice skaters when they skate backwards) and only for short bursts. I can throw my voice, change it and emit high pitched shrieks that can split eardrums. I’m ambidextrous, I can have multiple orgasms, and I can’t die, and I’m real.

Some people think your work is misogynistic. I think you love women more than any man on the planet. What’s the truth?
I want to love the living shit out of them. I think like all men, sometimes I want to bow down at the alter of woman, and kiss their feet, and other times I’d like to cut their heads off with a rusty chainsaw and use their hollowed out heads as a spittoon and I don’t even chew tobacco. In the end it’s all because of love. You don’t have the lust to murder, beat and kill unless you have the passion for love. A woman actually called me a faggot for not raping her last week, but I’m almost 109% sure it’s not rape, if someone’s asking you to do it.

What’s the most difficult thing about painting with your own blood?
Everything that happened in my life affects my art. I’m left handed so all my drawing from my childhood ended up getting smudged with my palm while drawing, so I could never develop a clean style, and that’s why my art style is very dirty. As a kid I had a lot of bloody noses, and I would always draw laying on my stomach in front of the TV. So sometimes while I was drawing a big red dot would appear on the page, before I realized it was my own blood. As a young teenager to adulthood, I had my nose broken four times so I would have even more bloody noses, so with a combination of being dirty and drippy, that’s why I end up using so much blood. The most difficult thing about it, is how to preserve it on the page after it dries, since it turns brown and chips and cracks away. Nothing lasts forever.

In your book you share an anecdote about how you spent days on a painting for the client then they ended up wanting a 10-minute doodle you did instead. Why do you think people connect with your work that’s fast and loose?
I think that’s the case with anything creative, because if you really are good at your job, everyone will always like the fast fresh inspired and spontaneous approach over what’s been contrived and laboured over. Freestyle. What’s better going to watch a fight or seeing a fight breakout at the IHOP parking lot? What’s funnier than someone shitting their pants while falling down an escalator?

You’ve got a notorious personality and reputation. Does it bother you when people aren’t able to look at your work without taking that into account?
A lot of things bother me, but all I need is a two-hour drum solo followed by a very hard fuck or a vigorous jerk, to flush all my worries and frustrations away. I’m Korean so I was born already judging right out the womb. I was already passing judgment on my mom’s vagina pushing-out skills and the doctor’s fanny-wack performance, so if people want to judge my work on my horrible personality, what can I say don’t read my interviews, or watch my shows. Let the work speak for itself.

You mention how self-destruction is important to you work. So what’s the most depraved or self-destructive thing you’ve ever done?
Suicide, duh! And I’m writing this shit right now, so obviously I sucked at it. I’ve never had a hard black penis in mouth with tears streaming down my face, but I have put the black shiny barrel of a gun in my mouth, and kept it there.

You wrote, “The one thing that enables men to succeed in anything is pussy.” You’re quite successful so how much pussy are you getting these days?
Actually none, I can be quite braggadocios and over confident when relaying messages to the opposite sex about my sexual prowess, saying things such as” I’m gonna fuck the living shit out of you and tear your world apart, I’m gonna make you feel things you’ve never felt before!!” These kinds of mental images usually get the women well lubricated to the point of overflow, so we go at it, heavy make out action tearing each others clothes, only to have my penis which is always hard, get a little too excited and have him puke his brains out inside my pants. This happens all the time, so I’ve still yet to penetrate, but I’m concentrating heavily on penetration for 2010 and made it one of my top five goals. So I’ve yet to get any “pussy” and I just now realized that was a pretty rude and vulgar question.

Die Antwoord are on our cover right now. When I interviewed them they had kind things to say about you. Tell me about your friendship with them?
Ninja and Yo-landi are my family. They grew up in an area where they are so strange, unique beautiful and creative, that they were shunned and made fun of, and they rose from all that bullshit to become the biggest performing duo in the universe. We are on the same paths, brothers from other mothers. I feel like when you are on a spiritual, sexual and emotional journey through time and space, and you want to bring, love joy, and happiness into the world, even if you, yourself, want to kill yourself, you end up meeting other spirits, creatures, bands of misfits, along the road, that bond instantly. It’s as if you knew them your whole life, with no beginning and no end. Watch us penetrate the world together.

What’s the secret message?
If I told you it wouldn’t be a secret, now would it? But nice try anyways.

What’s next for David Choe? What haven’t you done yet that you’d like to do?
I already told you fucker… penetrate.