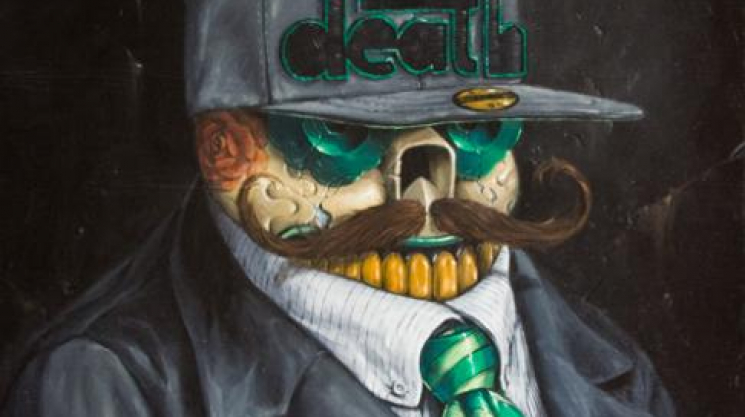 Montreal-based painter Jonathan Bergeron has spent many years working under the celebrated moniker of Johnny Crap, but it’s a name he is no longer content with. As he moves further and further away from the graffiti and poster art world to focus more specifically on painting for gallery shows and such, the stigma attached to Johnny Crap does not bode well with potential buyers and gallerists alike. When we spoke to him on the eve of his latest show “The Ordinary Life of Death” at L.A.’s Gallery 1988, he’d been working frantically on the final details for the opening; making sure everything was in place so that it would go off without a hitch. Central to the new collection of paintings is the ever-changing Calavera character: a skull-like figure based on the Mexican skull representative of the Day of the Dead. His character, however, is more-or-less an urban everyman but with a distinct street edge; he drinks coffee, rides a bicycle and has tattoos—all of which are direct, and indirect, influences of the artist’s personal style and tastes…

Tell us more about the concepts at play in “The Ordinary Life of Death.” Are there any distinct narrative threads behind the work and the characters we see in those paintings?
When I first began painting the Calavera character, I was painting more of a street culture kind of character—with elements of graffiti, tattoos and skateboards etc—and for this show I’ve decided to go back to that original “street” feel. Since the Calavera represents Death I’ve chosen to put him into these everyday activities, you know, like reading the newspaper or doing a touch of gardening and stuff like that.

Death pops up in the arts often, so tell us, how is your Death character different from other contemporary interpretations of the theme?
I don’t know. I know I’m not going to change the world with my view of death so I guess I try and put a bit of humour into it. Death pretty much surrounds us and I tend to get anxious about it so this helps me to reflect and come to terms with stuff like that. This is my way of dealing with it.

Girls, dogs and skulls form the basis for the majority of your subject matter—any specific motivation behind that direction?
I’ve owned a Boston Terrier for 14 years so they tend to come back into most of my paintings. They’re funny dogs with a lot of attitude. I have a new one now and he definitely has a personality of his own. He thinks he’s huge and that he can rule the dog park. I also like old bicycles, and I used to skateboard, so that stuff keeps coming back into my paintings. I actually started painting because of skateboard art and album covers. And I used to play a bit of drums so these are things that tend to pop up in my paintings a lot.

So does music have any other influence on how you work or what you create?
Yeah, I’ve listened to a lot of different music since I was about 13-years-old. It was mostly punk—when skateboarding was getting popular that was the main music—you know, the Thrasher compilations and stuff like that. I first started with punk and of course as the years go by tastes change, especially when I was doing graffiti. And then for the last show [“Into the Mystic”] things got a little darker because I was listening to a lot of black metal, so there were forests and wolves and stuff like that.

It would seem that a lot of your efforts go into preparing for these gallery shows. Is there any process you follow to ensure things get done systematically?
[Laughs] Ah, no. I would have to say that I work a bit better under pressure so I tend to procrastinate at first and then as the deadline approaches I try and work a lot. I don’t know, personally I have a hard time dealing with stress and I should probably be more serious at the beginning and plan the whole thing out before I start painting. But I find that if I work a lot towards the end it’s a good thing—there is more unity in my work—I’m nonstop into it, but living with the stress can be crazy.

Judging by your frequent trips to San Francisco and LA, one could be forgiven for thinking that the demand for your work is greater outside of Canada. Would you say this is true?
Ah, yeah. Actually Canada is beginning to wake up to that [lowbrow] scene and there are a couple of galleries that are into that kind of work. The biggest one being Yves Laroche gallery here in Montreal. They’ve really been pushing my work along with a lot of other Canadian artists, as well as mixing it up with well-established American artists. The more traditional Canadian galleries are catching on to the fact that there is a huge following of the movement. My stuff is doing a lot better on the West Coast because that movement comes from there. But yeah, it’s definitely moving along.Finally, can you share some insight into how you balance your artistic integrity, by doing what you love, whilst paying the bills and keeping the wolf from the door?
Well it’s hard to say, I don’t know what’s going to happen in the next six months. There have always been skulls in my paintings but that doesn’t mean I’m going to paint skulls for the rest of my life. I’ve never really looked at something and said, “This is selling right now, I can’t change.” I know that a lot of artists get caught up in that—they’re afraid of doing something that might not work anymore, especially if they have a good formula. I will always have a base from which I work but you never know; something might change in my personal life that affects my art. I like to try new things but once I had a kid it was more about paying the bills by doing what I like. If doing this kind of art doesn’t make money and I can’t pay the bills then I don’t know, I’ll get a job I guess and keep doing my art on the side. I do what I do; it’s not about street cred or anything like that. It’s about doing your own thing and being honest about it. If you’re an artist you just have to keep at it.