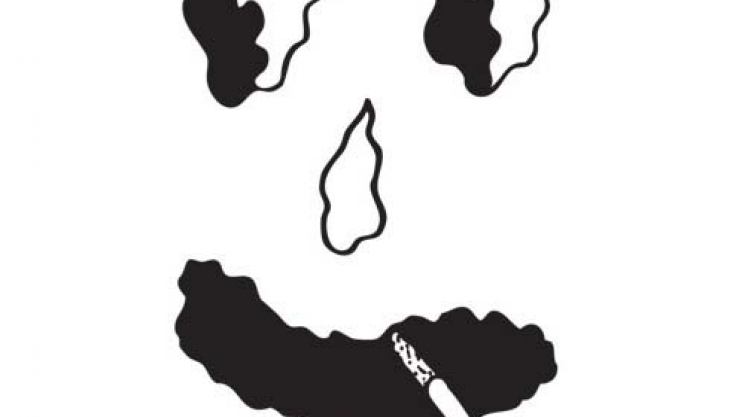 Justin Gradin makes Vancouver a more interesting place. He runs Cassette or Die, an anachronistic micro label that only releases music on cassette. He fronts the band Random Cuts, a rock outfit where two of the band’s members are mannequins. And for years he ran The Emergency Room, a now defunct studio, jam space and venue that was a hub for this city’s weird punk music scene.

On top of all that, Justin’s also an extremely talented visual artist. His funny, bizarre and psychedelic comic style has caught people’s attention and he’s starting to get shows through Chicago’s Co-Prosperity Sphere.

Another curious thing about Justin is he doesn’t own a phone and is sometimes very difficult to track down. Fortunately, I bumped into him on New Years Eve at 2am and my phone has a voice recorder on it. The following interview was heavily edited to make us both sound less drunk.

Why don’t you have a phone?
I hate it. I hate the telephone. Even if I’m watching a movie and a phone rings on the screen I hate it. I think it should be illegal to have an alarm clock in a commercial. If I go out and I see you, I see you. If I don’t, I don’t.

You’re in a band right now called Random Cuts. Who else is in the
band?
Well it’s just me really. There’s a girl named Julie Claire who sings background vocals, but I did all the guitars and drums and bass…

Why do you have the mannequins with you on stage?
Being alone? I’m not Neil Young. It’s a band. It makes me feel like I’m not by myself.

Where are you coming from with your art? Is it a psychedelic comic
book style?
Well, I didn’t ever read comics, ever. I think of it more as I’m a comedian and I’m making jokes more than I’m an artist making a painting. It’s more like having an observation about this shitty world we live in. And it’s shitty and funny. There are cute girls but there’s a lot of funny, shitty, stupid stuff.

So for you, this manifests itself in people having Disney characters for
breasts and genitals?
The Donald Duck tits and the Mickey Mouse vagina, I feel like that’s my upbringing. Suckling on my mother’s tit is like drinking Disney Juice. That’s what you get. You get a little older and all the sudden you realize Mickey Mouse is your dick. It’s a shitty thing but sometimes Mickey Mouse gets a little dirty. It’s a development thing.

You put on cheap concerts. Your art is also really cheap. Are you
worried about undervaluing your work?
People say that to me all the time, but the thing is, I don’t want to be an asshole. Just because I made a drawing doesn’t mean it’s worth $3,000. It is what it is. If I look back and I drew it and think it’s worth $100 or $50, that’s what it’s worth.

I believe when you did a drawing for me once, you said it was worth
$8.
That’s ‘cause the paper cost $4.50 and then my time—that makes it $8. I don’t like the idea of being an asshole and pretending I’m more important than I am.