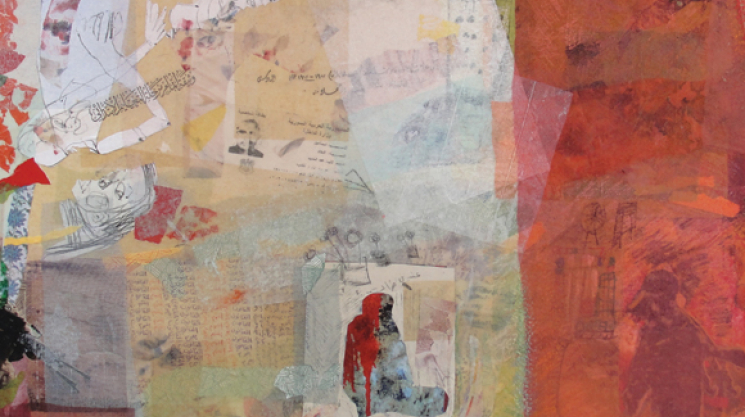 The Art Of Uprising

When Assad sends his troops to knock down doors, break hands, or shoot people point blank, simply for expressing their beliefs using their paint, pencils, lyrics or words, it’s easy to see why artists would stop doing what they love and using it in protest against these Nazi-style attacks against creatives.

One cartoonist, who dared to mock Assad, was pulled from his car last summer by pro-Assad thugs and had his hands broken. “The spray man,” Nour Hatem Zahra, famous for his graffiti activism, was tortured last year. This May, he was shot and killed by Assad’s troops. News correspondent Nidal Hemeidy’s home was bombed. In the same village, troops burnt the home of writer and poet Mohamed Khaled al-Kheder, down to the ground. Painter and sculptor, Mathna al-Ma’sarany, who decorates glass, died after being shot by a sniper in Homs.

These are just a few examples out of thousands of similar stories. But, Assad’s intimidation techniques’ have failed to scare all his opponents into silence, and many continue to use their art as a form of liberal opposition against the Syrian government, and their violence against their own people.

Graffiti activist, and former political prisoner, Tarek Alghorani, now a refugee in Tunisia, is still a vocal opponent and one of many graffiti artists who called for “a week of graffiti for freedom” from April 14 – 21. Hip hop artist El-Far3i penned a song called “Birds of Houla,” about the massacre of 108 people in the town of Houla, mostly women and children. “Tonight, the smell of blood coming from the north is torturing me,” he raps, no longer able to sit in silence and watch. And, artist Heba Alakkad, who uses her art to try and tell the world about the true extent of the atrocities in Syria.

We spoke with Alakkad, who fled to Jordan with her husband, about her experiences, her artwork and how she refuses to give up:

“I was born in Damascus, 31 years ago, and now live in Amman, Jordan with my husband Nouri who is a photographer and graphic designer from Syria. We moved eight months ago, as it became too dangerous to stay in Syria. My husband is a military fugitive, wanted in Syria, and if he’s arrested, they will force him to join Assad’s troops.

When I was in Syria, I joined demonstrations on a daily basis, and have been one of the lucky few to escape unharmed. Despite being an atheist, I joined Friday protests at mosques – it was the only place safe enough to gather large groups in protest. On many occasions I had to flee my home, and even Damascus, to hide from Assad’s security. I helped young activists from across the country, fleeing their own cities. I hid wanted protestors, helped people who had to leave their homes after the bombings and delivered aid to the ones who stayed. I also distributed campaign leaflets in the middle of the night, risking my life for the cause.

I carried on this way until I met Nouri in June 2011, who is also an activist, from the city of Aleppo. We occasionally organized joint demonstrations, but in October we got married, moved to Aleppo and our activism died down as our fear rose. In truth, everyone is afraid of everyone. After the violence escalated and the presence of armed clashes between the two parties became constant I realized, this is not my profession, I am not a fighter. I decided to use my own, non-violent, weapon - art.

Due to the conditions in Syria, getting materials for painting, at least, became impossible and prices rocketed. So, in January this year, we decided to leave for Amman. Being nearby, we still know the day-to-day happenings in Syria. We stay in touch with activists there, and help when needed.

Now we’re in Jordan, our largest artistic project ever, Nouri Heba, is taking shape. I work in mostly collage - using paper, cloth and paint - and we combine my skills with his photography and graphics to create our artistic protest. So far, we have had four shows, one in Amman, one in Egypt, and two in Beirut.

Leaving Syria may not have been in the best circumstances, but thankfully, it has helped us spread the word. We plan to showcase Nouri Heba around the globe, to try and convey what is truly going on in Syria to the rest of the world, in the only language understood by all: art.”

Nouri Heba is currently part of the Festival of Art, in Beirut.