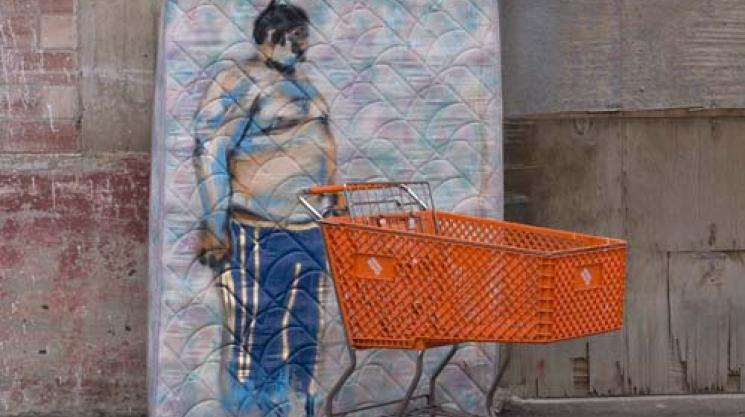 Strewn around the backyard of an old bank in Montreal, propped up against trees, are used mattresses decorated with serene, sleeping, naked bodies. And they are captivating and catching the eyes of galleries, art bloggers and casual passersby across the country. The man behind these works is Winnipeg native Brian Hunter, who, at 24, fled the country to explore Asia after his efforts at making a full-time living off of his art seemed fruitless, and a need to see the world took hold. It’s our loss as we wait for more, because Brian is doing what few artists choose to at such a scale—just don’t call it “eco” or “street” art.Sometimes these labels can be irrelevant to, or negate an artist’s intention. But Brian, currently in South Korea, shrugs it off saying, “As long as I’m painting on garbage or painting on the street I’ll be in those categories,” adding, “I’m too much of a square to be called a street artist. I’m not worried about how someone might read my work; I’ve come to realize that it’s impossible to predict what people are going to think. I find, especially when I’m trying to be witty, someone will usually understand the exact opposite of what I’m trying to say.” Brian’s aesthetic lies in “youth and honesty”—two things that become evident in looking at his work on mattresses, comforters, bed sheets, and sleeping bags. These are purposeful motives, yet each work remains simple and accessible. “I’m interested in wisdom, or searching for some type of approval. Maybe an absence of direction… I think I’m pretty cliché, but a lot of my ideas in all my work can be summed up as coming of age.” His work, with its often times fantastic themes—featuring giant headed characters from The Wizard of Oz and Mighty Morphin Power Rangers—frequently gets Brian accused of being flippant. This doesn’t bother him though. “I liked when someone once described my sleeping bags as unique, but at the same time completely obvious. The simple and clearest ideas are the best.” Though he admits to being in a learning stage as far as cohesively bringing new artistic elements together, Brian is careful to do right by his vision… much to the chagrin of his collectors. “There’s nothing worse then getting a call from a gallery telling me a client wants to know why [parts of their] painting are starting to flake off. I think painting on garbage is my outlet to rebel against all that.” Brian has his sights set on working with materials on a larger scale. He developed the idea of painting on giant tarps after taking a motorbike trip across Vietnam, “I’m doing a lot of research and saving up so I can tackle some ambitious projects.” Hopefully these ambitions entail some more public displays, though a few have deemed them as “drawing attention with public defacement”—a statement that Hunter refutes, “I’ve always thought as long as I’m painting on garbage it doesn’t count as vandalism… I think that’s more related to property, it’s cold and impersonal.” Besides, any ol’ street artist might not have thought to take such care in selecting his canvases. As Hunter explains, “The flower patterns on the mattresses placed in the garden couldn’t have been more perfect.” The only thing dreamier than that idea is the work itself.