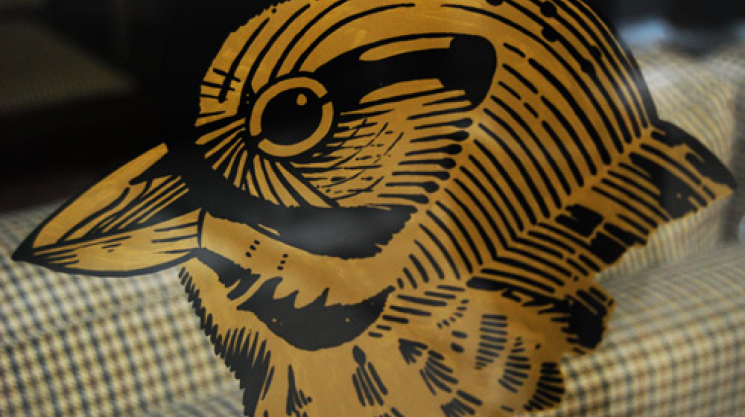 Two things about Montreal artist Dave Arnold: A) He is hilarious, and B) He doesn’t like to be pigeonholed. In an attempt to avoid this, he’s currently working under the alias Mr. Sign, and is bringing a new face to many storefronts in an old way: by hand-painting signs for businesses eager to recreate that old nostalgic charm. He also has a collection of paintings titled “Teenage Nudes,” consisting of Betty and Veronica from Archie comics posing in the nude. “It seemed like a decent idea,” he says, laughing.One commonality within all of Dave’s work is his rampant penchant for nostalgia. “I think a lot of it’s based on reading Archie comics actually,” he reveals. “The stuff I think looks interesting mostly can be traced back to all those funny, weird little ads in them that have tricky wording, but are also real simple.” Having never really been interested in the “newer stuff,” he shares that he’s basically been stuck in the Twenties, adding that this has made business successful. “It almost seems to be like a trendy thing now, to take a place and give it that old-fashioned, almost cottagey type vibe, and it seems to be appealing to all sorts of different people—to go back to the sort of older look, like not as crisp and clean.”Mr. Sign’s success in Montreal has had people talking, with store owners eager to commission his work and clients brought to tears of utter joy with the results. Dave laughs, “Oh my god, I think that was the best response you could ask for. If someone breaks into tears, then you know that you’ve hit the mark.”And although he’s always had a knack for artistry, Dave unabashedly admits that really, he’s just trying to get by. It’s all about, “How can I take what I’m doing and charge more money for it, basically. It’s always been the goal to sell everything I’ve got!” He further divulges that he doesn’t have much of a connection to, or interest in art as self-expression. “The whole ‘express what’s on the inside’, like, ‘put yourself on the canvas’, has never interested me. I just like pumping this stuff out, and if I can somehow pay my bills doing it, I’m happy.”Apart from his flourishing sign painting business, “Teenage Nudes” has been Dave’s greatest success to-date, garnering overwhelmingly positive public interest. Always candid, he laughs, “People actually give a shit about Archie?” But after doing the show it hit him, “At that age you have no idea what sex is about, and then you see a boob in a magazine and giggle yourself to death, just trying to figure out what is actually going on. So a lot of people were like, ‘This really speaks to how my brain used to work, and how my brain works now,’ and the fact that I was able to bring them back to an older time.”

As for what’s next, Dave says not to expect to see him in the sign business for much longer, as he tends to bore easily. He’s planning his next show to be titled “Mr. Sign” and it will consist of signs he describes as a little bit more twisted or weird, thus marking the end of Mr. Sign, and the beginning of something new. His motivation for doing this? “So my brain doesn’t explode.”