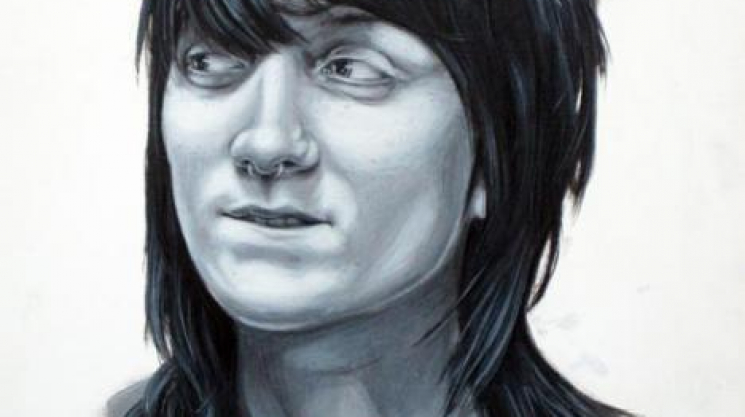 Nothing about 25-year-old Vancouver artist Robert Mearns is ordinary. For starters, note that Robert is pushing the six-foot-five mark dramatically, complete with a wild mane of spectacular hair. And just in case that didn’t make him conspicuous enough, he’s got the head of a deer tattooed defiantly across his chest. Ordinary is not in Robert’s vocabulary, nor his DNA for that matter—and this trend follows into his work.

Robert is a believer of “survival of the fittest” and in the art world he feels that following pretentious rules and ordinances neither aid his survival, nor fly with his mantra that, “Art should be for the people—available to anyone.” He explains, “I’ve always been a stubborn person, and I’ve never been good at doing something that someone tells me to do.” He then went on to admit he once showed up to a formal gala art auction in skinny jeans and an American Apparel v-neck tee and got drunk.

But don’t sign him off as a total rebel—Robert appreciates the structure his BFA in Visual Arts from Emily Carr has given to his work, and he’s en route to get his Master’s at UBC in order to stay active, further his networking capacity and, “help create a larger art community full of healthy competition and opportunity.” Robert confesses his education has allowed him many opportunities that have contributed to his extensive resume of work—including the current album cover for Felix Cartal on Dim Mak Records. His other work to watch for is his photorealistic portraiture. These portraits are literally larger-than-life sized, and as described by Robert are, “like getting a really honest look out of somebody. Like catching somebody in the middle of a sneeze. Like when people let their guard down and kind of relax around you.” Not only are they extremely impressive aesthetically—a priority on Robert’s list of importance—but they beg the question, ‘Who IS this person?’ Which is exactly what Robert has set out to do. “I want people to see these strange and interesting people as I see them, and to want to know more about them.”As for what Robert’s setting out to do next? He laughs that “Half the fun of being an artist is getting to the future,” adding, “I think of Bob Dylan saying, ‘When I wake I’m one person. When I go to sleep I know for certain I’m somebody else.’ My opinion is changing all the time as I learn and develop my skills. I feel like a dog chasing cars. Art is the only thing I know for certain that I want to chase, and each new project that whizzes by keeps me excited.” Robert, a self-proclaimed über-hipster-womanizer-painter, is sure to finish anywhere but last in the art world, where only the fittest survive. “I feel pretty excited about being an artist,” he says optimistically. “I’ll probably never stop doing it even if I don’t want to anymore.”