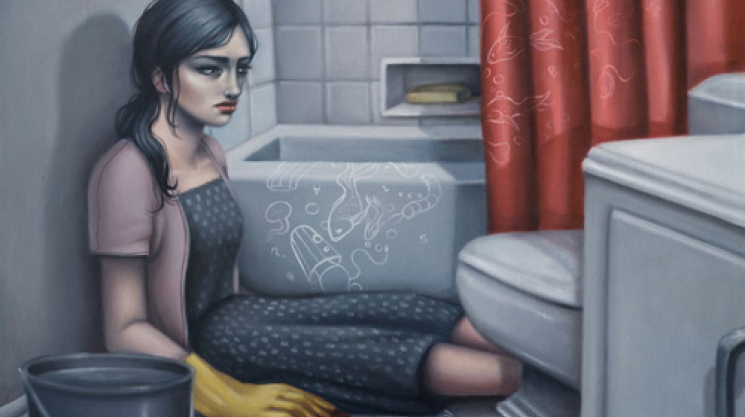 At first glance, Sarah Joncas’ paintings of pouty, buxom damsels in distress seem like intense glimpses into the mysterious mind of a tortured Robert Smith-infatuated artist. But the reality is quite the opposite: Sarah’s artwork really reflects her love of pop surrealism, dichotomy and subjects that provoke a second look. Whatever her inspiration may be, it’s obviously working as Sarah who, at 22, has already had multiple showings in L.A.’s Thinkspace Gallery, including her recent series called “Beneath the Seams.”

“Working with my usual atmospheres of anxiety and melancholy, I wanted to turn vignettes of the private and mundane into spaces more haunted,” says Sarah. “The actual title, Beneath the Seams, was inspired by the phrase ‘Behind the Scenes’—that kind of cinematic voyeurism.” The pieces bleed a sense of dejection and helplessness, with influences from Marshall McLuhan’s concept of the Mechanical Bride (though the women at the forefront of Sarah’s surreal pop art seem to be at the same time mysteriously in control). Dense emotion emanates through minute details in eyes, brows and angles—most of which are not unlike the artist’s own features. Though she understands the self-portraiture correlation people make between herself and her subjects, Sarah insists they are not one in the same, “People have dragged it far enough into presuming I’m vain or conceited, which really isn’t my character; and it’s past the point of being a criticism on my work anymore.”

Her tendency towards portraiture bent runs contrary to the relative shyness she presents, though there is nothing reserved about her work. “I can’t help but be captivated by imagery that concerns identity, whether it’s cultural, sexual, social, or all of the above,” she says. “I’ve always felt that if you could become more self-aware, then it would also allow you to be more open-minded and understanding about others.” The sinewy women with their long necks and carefully placed hands are supported (and occasionally encumbered) by recurring imagery: religion, dusk, bare trees, technology and her favourites, goldfish and hearts. Unsurprisingly, this adds to the “goldfish bowl” feeling one imagines her Girls encased in. There’s an attachment Sarah feels to her symbols, likening them to the comforting feelings of sentimentality and sweeping adolescent emotions, “When juxtaposed with my darker characters, which still hold a cartoon-esque mannerism, it makes the feeling of the hearts both frivolous and serious to me,” quickly adding, “I don’t think it’s necessary to have a complete idea of the ‘why’ all the time anyhow—something of the mystery to it is a drive in keeping it alive.”

Surrounding herself with music is another important aspect of Sarah’s creation period. “It’s a linking tie between me and these temptress women I paint…music is something of a lubricant to escapism, as well.” Music varies from Pink Floyd and Led Zeppelin, to Bat For Lashes and film scores (Vanilla Sky, Fight Club). And the viewer completely gets it. There aren’t simply feelings and expression present in her paintings; Joncas imprints sound through saturated colours, dark whimsy, and a sort of glowing heat that radiate from the hues on the skin she paints. It is at once pulsating and still.

Sarah will soon be embarking on another set of trips in early 2010 to support a future show, but relishes the free time she now has since “Behind the Seams” finished its run and art school is well behind her. “At the moment, I’m working towards another body of work for a solo show at the Roq La Rue Gallery this coming February in Seattle. I’ll also have some work for Art Basel this winter, a show at the M Modern Gallery this April in Palm Springs, then another solo next summer back at Thinkspace… I keep wanting that sudden surge of inspiration and drive to shove me back into day-long paint-a-thons, but really all that’s happening is fatigue and distraction.” For now she will focus on taking a step back, maybe even trying her usually brush-occupied hand at sculpting, and keep an open mind when it comes to the possibility of commercial work. Whatever it is, Sarah maintains a simple mantra designed to keep her grounded, “Remember why you started creating things back as a kid in the first place.” Plus, she says. “I don’t want to work at Wendy’s ever again.”