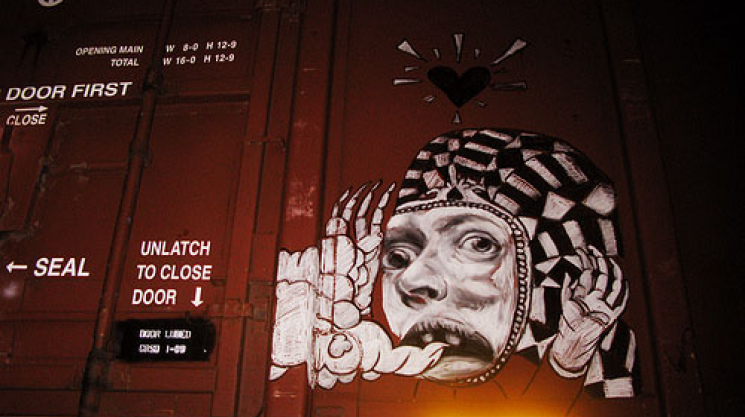 The street and the gallery are two diverse domains for an artist’s work, each with their own set of benefits and drawbacks. Many street artists today have successfully established a place for themselves in each of these domains. Canadian Troy Lovegates aka Derek Mehaffey aka Other is one of these highly skilled artists. Troy Lovegates began painting on the streets around 1988 after noticing graffiti on the buildings in Toronto that would magically appear overnight. Also around this time he developed a love for rail travel, therefore it was natural for him to begin displaying his art on trains. His rail work became part of a nomadic culture that stretches as far back as the 1800s. Transients, train workers, and soldiers originally developed the tradition of inscribing their names on the trains they used to roam around the country. Many of the tags that remain on trains still in use today, but now new forms of art have been added to the boxcar walls as well.

Troy Lovegates’ train work consists mainly of black and white outline portraits with exaggerated facial features. Some of the more complex pieces resemble his street murals which are large-scale, multimedia paste-ups created in his studio and then adhered to outdoor surfaces under the guise of nighttime. His train pieces are influenced by many uncontrollable factors, all of which add to the urgency of the art form. Often times there are people working in the train yards which makes it difficult to focus on one piece for too long. And then there is the weather to consider. Working outside on a Canadian winter night poses a whole other set of obstacles to overcome.

In order to fund his train work, Troy Lovegates exhibits his art in galleries. To date, he has painted pieces and had art shows in Taipei, Tokyo, Paris, Dublin, San Francisco, Los Angeles, Austin, Detroit, Montreal, Toronto, Dublin, Barcelona, Lima and many more cities around the world. His international work has occupied many canvases, from gallery walls to a projection on the side of the Romanian Palace of the Parliament, the largest building in Europe.

A quick internet search of Troy Lovegates yields a Flickr page full of images and a few brief interviews with sparse details about his life and his art. After my initial attempt to set up a phone interview he told me that wouldn’t work because he doesn’t actually have a phone. I then emailed him a list of questions that I unfortunately didn’t get any responses to. Troy Lovegates, who is a veteran of the interview process, decided to reimagine the traditional question and answer format with a short biographical story.

So, here it is. The story of Troy Lovegates in his own words.
Supposedly when troy lovegates was just a baby… just able to mutter and babble his first words… he suddenly said a full sentence out of nowhere… just one line… ”I was an artist in my last life and I am going to be one in this life too… his mother’s jaw dropped… where had this come from? She went out and bought hundreds of dollars worth of art supplies and placed them all over the baby geniuses room.. there they sat stagnant and dusty for years until they were sold one spring in a garage sale to kids that cared….

Now in the day Troy paints on found objects and makes prints… it is his job… it pays the rent and it is also good practice for his real love… those nights deep deep in between train lines… not a care… drawing on things just for the hell of it… just because it feels right.