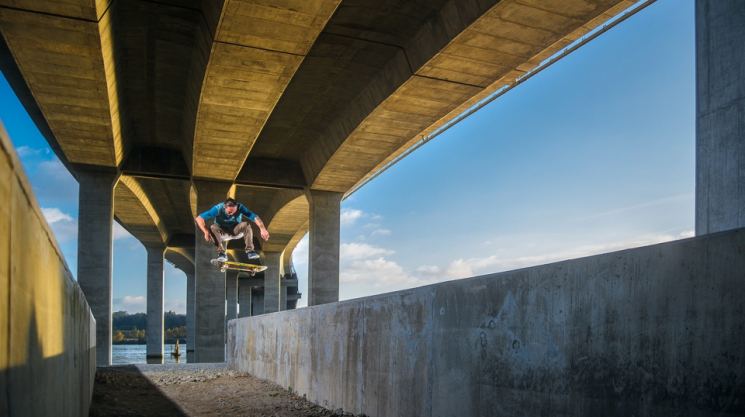 Montreal and Toronto might be far from being massive hubs like Los Angeles or San Francisco, but the most engaged users of all four cities' architecture and urban space perhaps have a joint undivided attention: skateboarding. Admitting we challenge the traditional architecture theory, we then refuse to conceptualize the city as a simple "object" grounded by rules and regulations, and accept the idea of skateboarding and its related activities to have an enhanced level of intimacy with urban realm. For instance, Montreal and Toronto photographers Dan Mathieu and Michael Kazimierczuk, through a lens of skateboard photography, repurpose architecture into a space in motion, a contextual environment. As English architectural historian and urban commentator Iain Borden illustrated 20 years ago, "Architecture, like all cultural objects, is not made just once, but is made and remade over and over again each time it is represented through another medium, each time its surroundings change, each time different people experience it."

Polar opposite to the average pedestrian and his experience of a city is photographer Dan Mathieu. Documenting Montreal and its skateboarding athletes since 1995, Mathieu sees the architectural landscape of space as one of the primary focus in his shots. He explains that most of the times, skateboarders he works with are aware they now need an interesting photo composition that doesn't solely rely on foot-driven improvisational thinking. For Mathieu, the conversation with a skater about composition can only make for a better photograph. And for the most part, Michael Kazimierczuk uses a similar approach to his practice. Based in Toronto, Kazimierczuk shoots with an architecturally inspired vision: "The European architecture is amazing and stands out so much more than anything that we have." But flying out the country isn't always an option. For the young artist, it's about doing with what's around, figuring out how the skateboarder should come into play, and seeing how the location can serve the trick or the photograph. In his experience, many skateboarders don't seem to be looking at architecture the way he does, but the differents visions complete themselves.

When questioned about what it takes to come up with an iconic skateboarding shot, Mathieu and Kazimierczuk both have some ideas. In the Toronto-based artist's opinion, "The best photographs come out when the architecture tells a story, and the skateboarder just fits into it." For Dan Mathieu, it's a combination of many things, starting with being a recognized skateboarder. "If you're not well-known, then it gets harder; you really have to come up with a hard trick or something that has never been done." Architects in their own way, skateboard photographers compose their art with precision and timing. So generally speaking, a stunning photograph relies on good timing and lighting, a beautiful composition and any little funky detail that makes the shot more interesting. "How many handrail lipslides can you look at...?" simplifies Mathieu.

Similar to draughtsmen, Dan Mathieu and Michael Kazimierczuk shooting is first and foremost a passion for capturing the essence of a day, the culture and the lifestyle we now associate with skateboarding.

"I try to capture the moment and the way the day is going. Sometimes, it's going to be a really shitty day, and it feels like you can see it in the photo. Other times, it's the best day ever, everything works well, and you can feel people smile." - Dan Mathieu

Growing in experience, Kazimierczuk acknowledges a shift in his vision. "As you get older, you realize how much of a culture and a community lays within skateboarding. There's definitely a documentation feel to it. You're not there to show something that's not real; you're just there to document what the skateboarder is doing." And documenting is something they do well. Their impressive skill sets and editorial coherence successfully hide the underlying limitations that are security officers and kick outs. Shooting skateboarding sessions requires having a quick eye and the precision of an architect; it's a question of milliseconds. If the shot is a little too early or a little too late, it isn't as powerful. However, as any skateboard photographer would tell you, therein lies the joy. 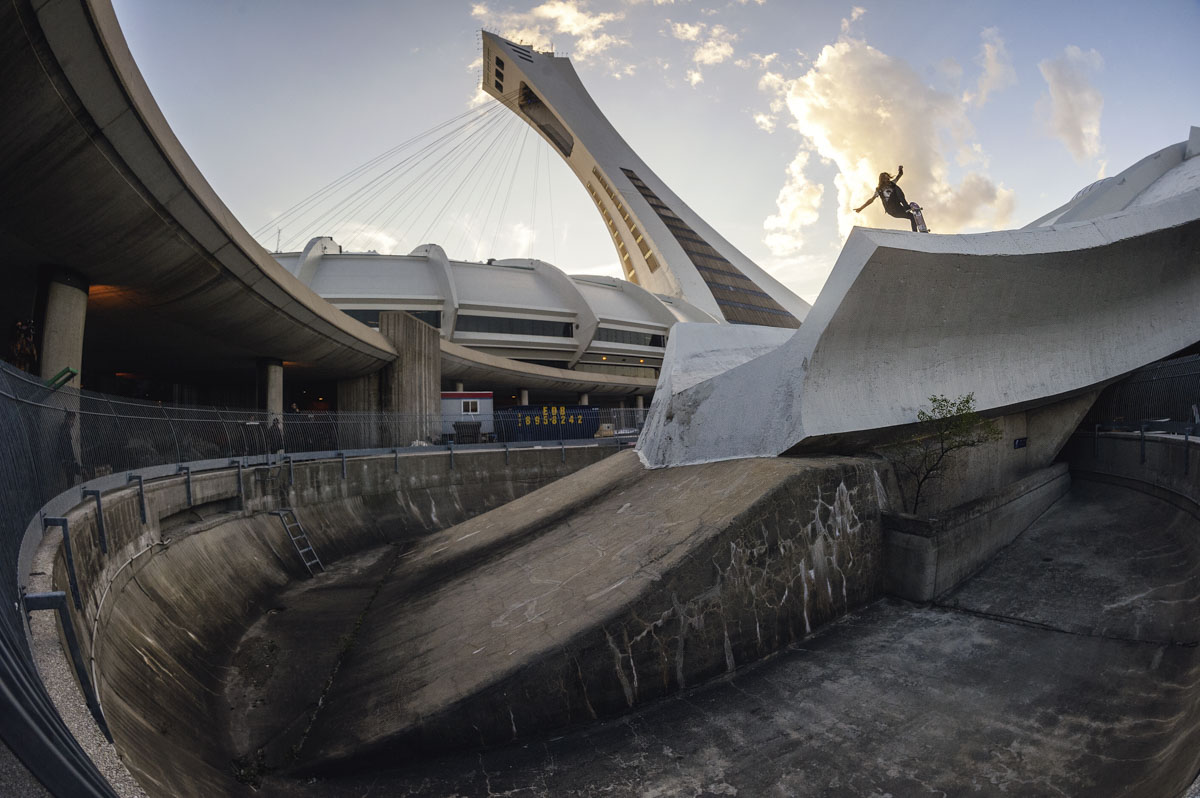 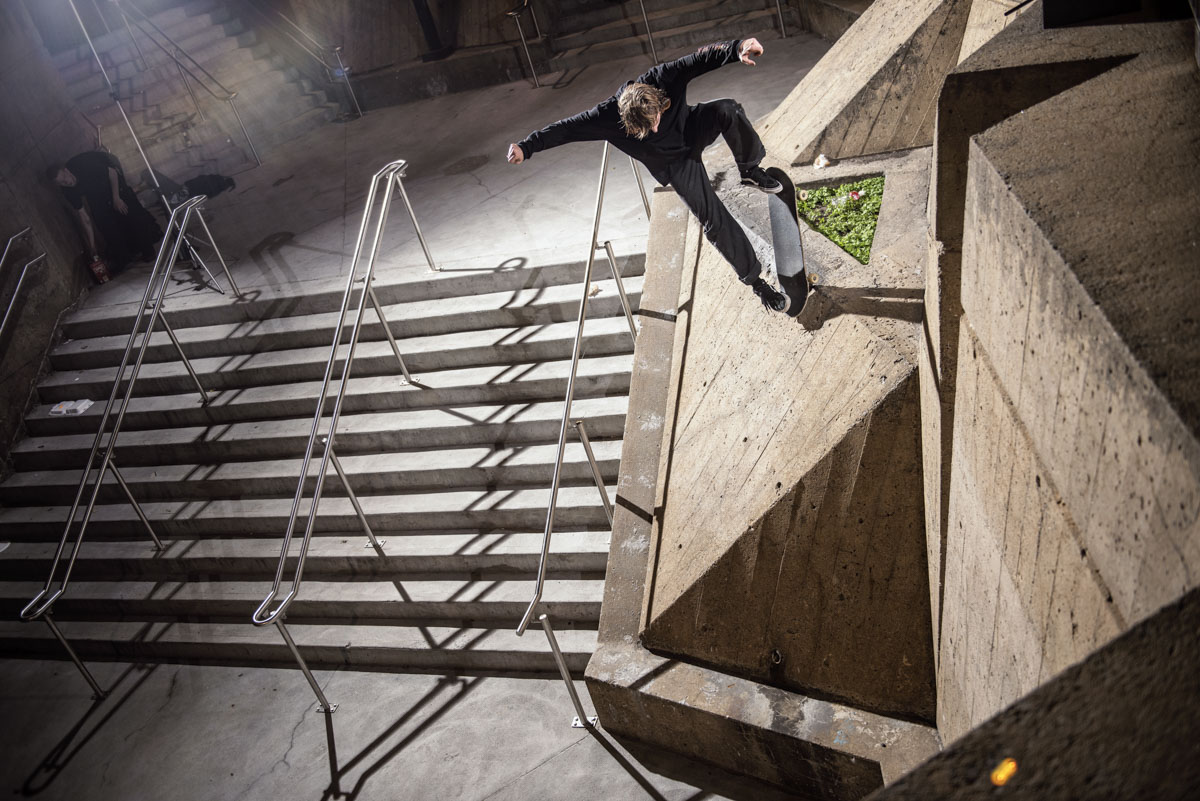 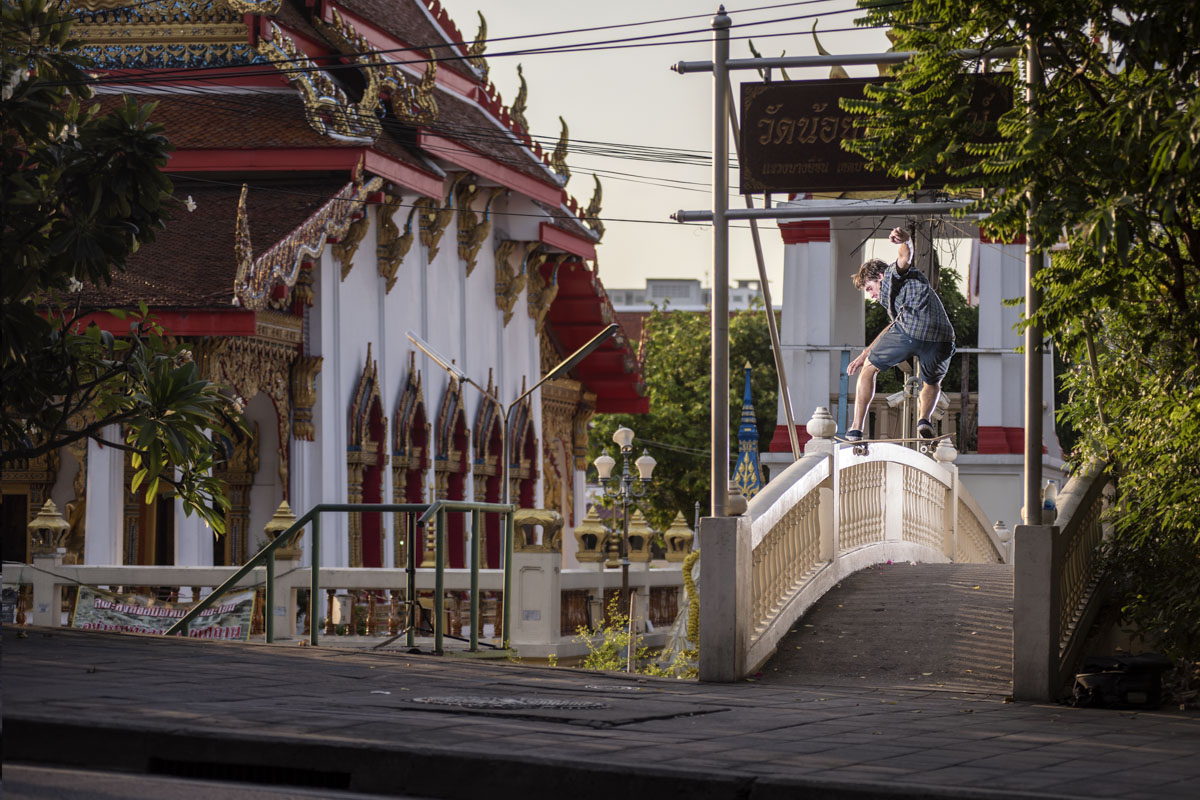 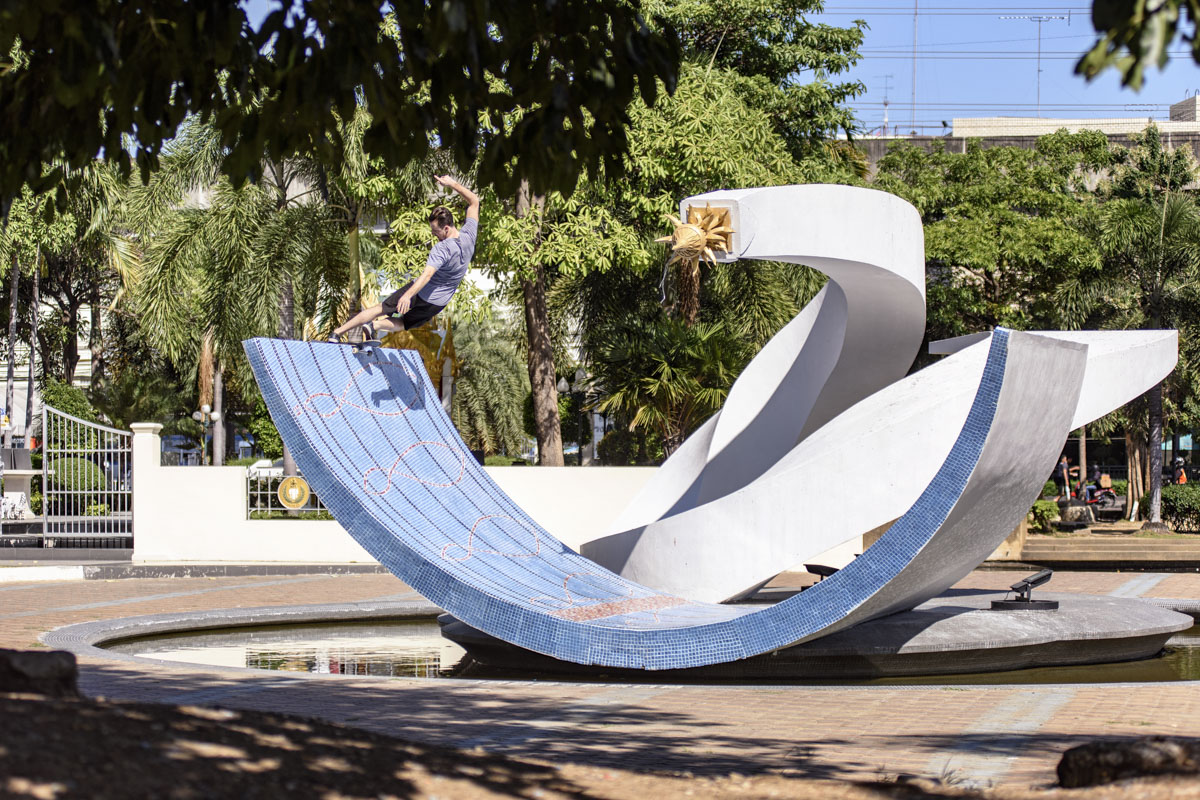 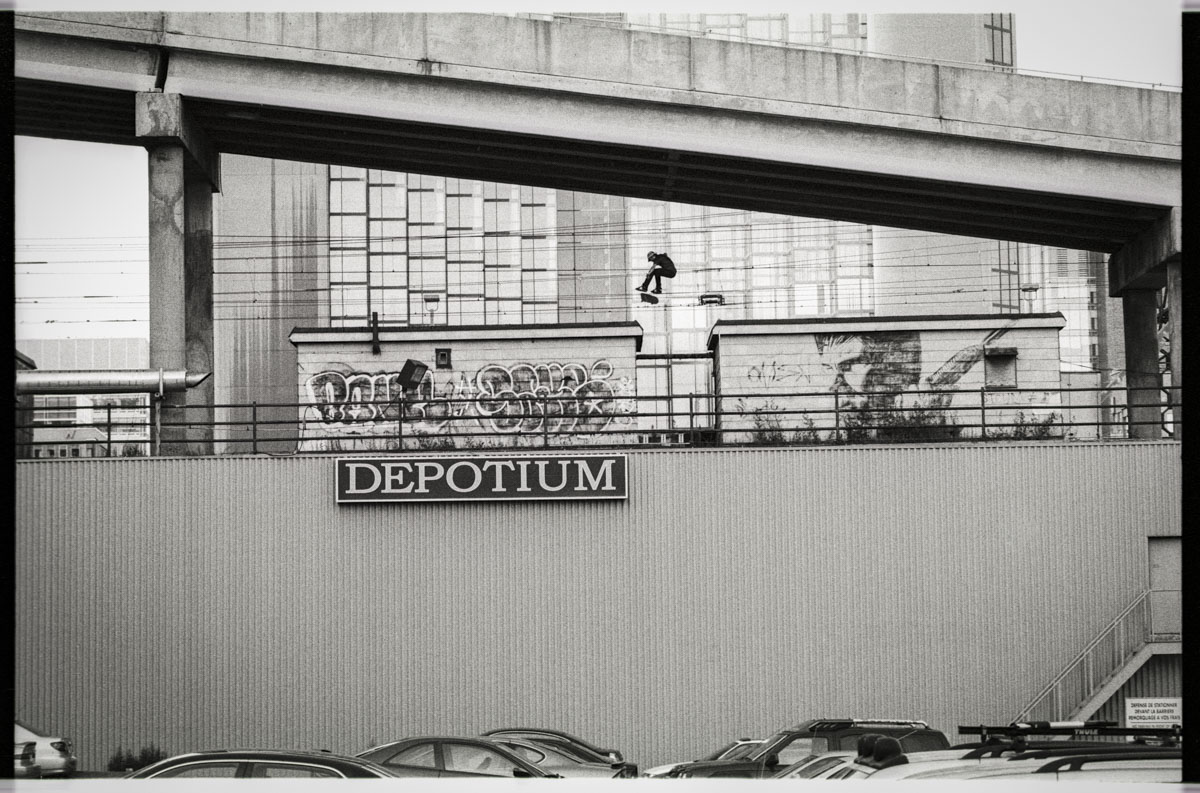 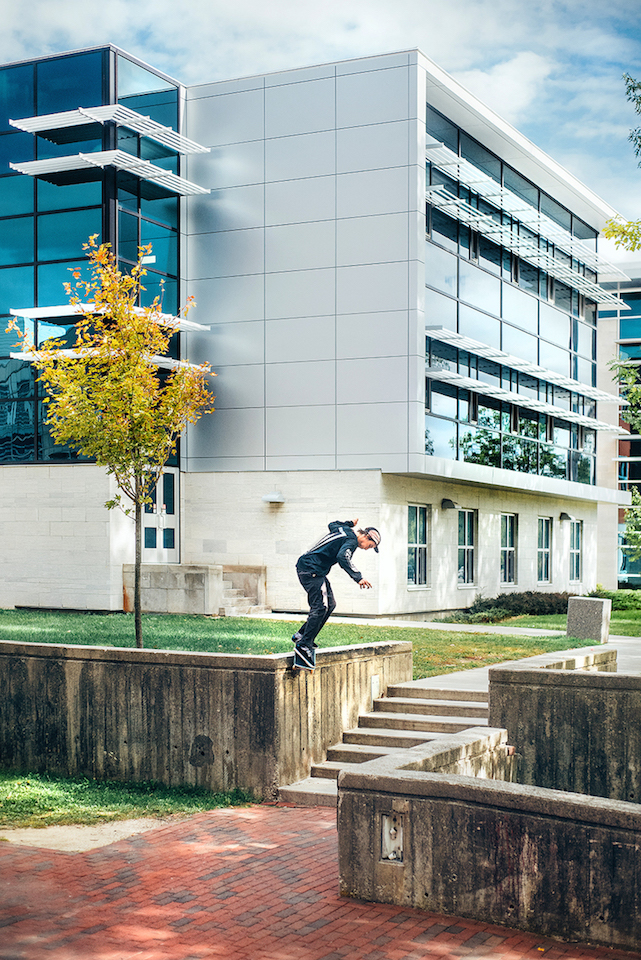 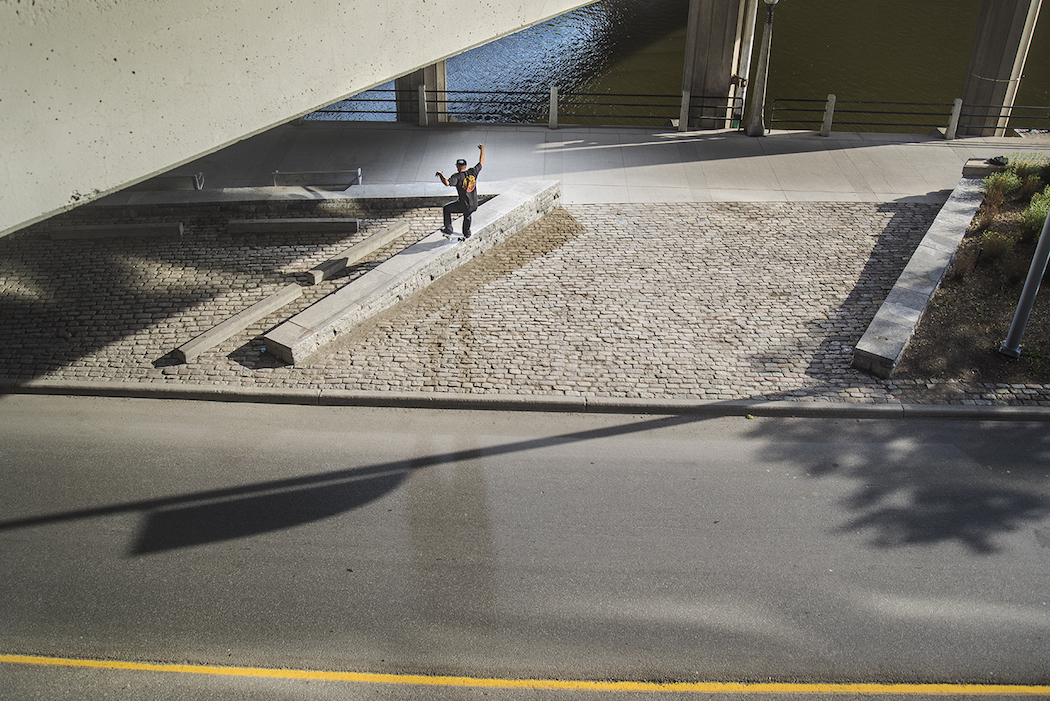