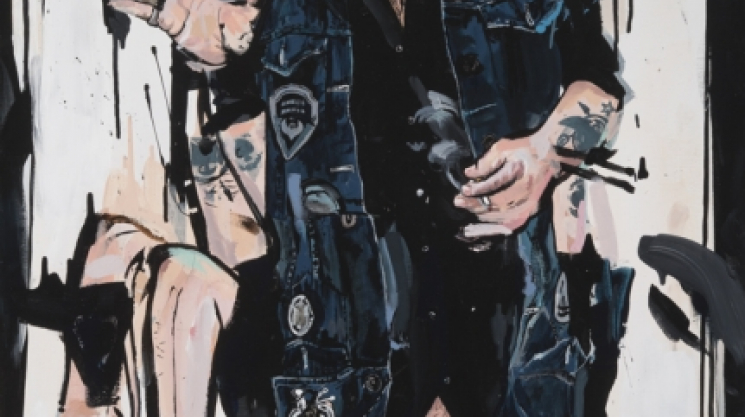 "The discipline of creation, be it to paint, compose, write, is an effort towards wholeness.” - Madeleine L'Engle

If asked, one might seriously question what pipefitting and painting have in common. Different careers, different lifestyles. But, as different as they are, they tie back to a man and his name: Mitchell Villa.

Based in Victoria, British Colombia, level 3 pipefitter Mitchell Villa has lately been drifting away from the profession to focus on a passion of his: painting. While it was always a practice he was very passionate about, Villa has only felt in the last two years that it's something he could live off and, if not, he'd "rather be selling coffees or working in an art store or something like that. [Painting] was always kind of secondary to whatever I was doing at the time. For some reason, I just clicked in the last little while." A Digital Design graduate from the Vancouver Film School, Villa has been working as full time as he possibly can from his studio above a tattoo shop in Victoria's Chinatown where he strives to capture life and movement in a practice that emphasizes raw nature by combining the grotesque and beautiful.

Mirroring the way he reworks a painting by layering image upon image until his vision is accurately portrayed, Mitchell Villa is in the process of adding, subtracting and replicating some aspects of his life. Pipefitting allowed him to take the last year and a half off, which he used to fully commit to his passion, but he's getting tired of that field of work. "It's hard to turn down that kind of money and the freedom that comes along with it, but for me lately, with my art, it just feels like it's not worth it." He's looking for a better quality of life, one that lets him stay at home to focus, network and paint. He adds, "That's the biggest thing about it [living off art]... you've got to be putting in so much time networking and talking to different people, and just painting too, because then when there's an opportunity, you have new work to showcase."

Villa, who participated in the 2015 Art Battle - a Canada-wide live competitive painting event - feels like things are finally coming together: he is meeting more people, and is multiplying opportunities and exhibitions in galleries and coffee shops. "While a gallery show might be more prestigious, coffee shops have been great for me. It's somewhere everybody goes... everybody drinks coffee." This summer, catch Mitchell Villa at upcoming shows in July and September or drop by his studio and watch him paint live as he opens up his working area to the public for the very first time. Great time and chat guaranteed.