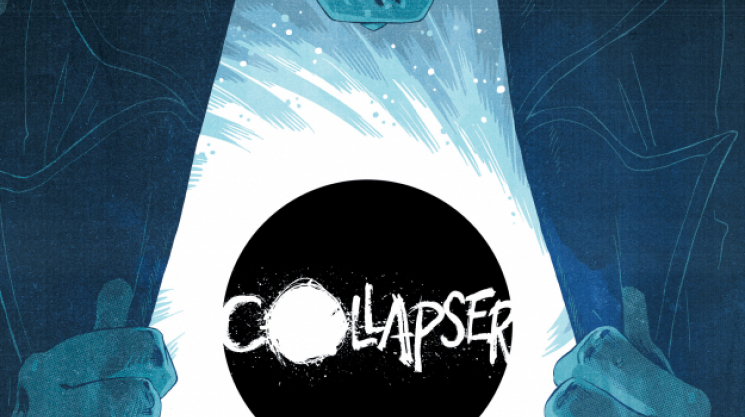 When it comes to fiction, we love rooting for the bad guy. It’s why more cosplayers opt to don Darth Vader’s breath-stifling black mask over an original trilogy Luke Skywalker robe, or why online battle masters went bananas when Fortnite reintroduced Marvel heel Thanos as a playable character this past spring. Imperfect, endlessly complicated, and full of mystique, there just seems to be more to latch onto with a villain. Comics creators Shaun Simon and Mikey Way came to the same conclusion as they were prepping their new title, Collapser. But after falling in love with the core concept of their central scoundrel— a guy with a powerful, worlds-destroying black hole sitting smack-dab in the middle of his chest—they decided to see how the story would change if the character switched teams. More specifically, what would happen if their big bad went good?

“As a kid, I gravitated towards the villains, you know? I loved Starscream from Transformers; I loved Cobra Commander and Destro,” Way says during a call with ION. “It’s weird, [when] I pitched the story, basically there was a hero and a villain; Collapser was the villain at that point. Basically we wound up taking what we liked most about the villain and made him the hero. The story has changed a bunch, but we thought that we liked the villain more than the [original] hero. We like the guy with the black hole.”

After tweaking their initial pitch, Simon and Way ended up anchoring the six-issue limited series— which debuts this month through DC Comics’ Young Animal imprint— around Liam James, a New Yorker with severe anxiety issues. But even before becoming one with the black hole, which mysteriously arrives at his apartment via an interstellar courier service, the character’s life is enveloped in darkness. As a struggling DJ, they obsess and beat themselves up over a flubbed needle drop suffered partway through the first issue; his girlfriend, Jocelyn, suggests he’s an uncommunicative “lockbox” for internalizing every struggle; his mind immediately races to worst-case scenarios throughout the book. Liam’s inner monologue, fittingly, is presented as a series of murkily-shaded, ink-black thought bubbles.

“That’s the anxiety talking,” Simon says, confirming how mood disorders play a role in Collapser’s overarching themes. “These are the thoughts that someone who deals with [anxiety has] in their head at any moment during their day.” He continues of the source inspiration for these fretful story beats: “I was very much like Liam at one point. Mikey was too.”

As the first issue unfolds, a helmeted figure hunting Liam for as-yet-unspecified reasons implies that the hero’s deceased mother had also been a Collapser. On top of the black hole existing as a visual metaphor for anxiety, Simon and Way are using their story to explore familial cycles of depression. “Nothing happens by accident,” Way explains. “Your likes and dislikes, they’re linked somewhere down the line. Any kind of mental imprint you have, somewhere down the line there’s repeating patterns.”

Dark thoughts have impacted Simon and Way at various points, but Liam’s DJ career is more of a foreign concept for Collapser’s creators. Both, however, came up in the New Jersey punk and hardcore scene: Simon played keyboards for a group called Pencey Prep in the early ‘00s, while Way played bass for beloved theatrical emo-rock unit My Chemical Romance (his brother and MCR vocalist Gerard Way runs Young Animal).

Despite neither musician having experience cueing up hits in the club, Simon explains of the decision to throw Liam on the 1’s and 2’s:  “Music was a big part of mine and Mikey’s life. We wanted to include [that], but the whole superhero in and band thing is so overdone in comics these days. We didn’t want to go that route. We just drew from the music we grew up on. Making him a DJ seemed like a great way to incorporate all that stuff without putting him behind a guitar or a microphone.”

Outside of its bar scenes, it’s clear that Collapser will only dive deeper into the fantastical as the series goes along. Penciller Ilias Kyriazis’ layouts inside the black hole thus far are a disorienting zero-g backdrop of fanged aliens and satellite debris; by issue’s end, Liam is seemingly transported into ancient times with no more than a plastic pirate sword and an unexplained power to protect himself from whatever comes next.

“The cool thing with this story, with [regards to] world building, is that when you talk about a black hole, there’s no rules,” Way says excitedly. “It bends reality! It literally could go anywhere, as far as you can imagine. Even lending that to the future of Collapser stories, we can take left and right turns and it all makes sense.”