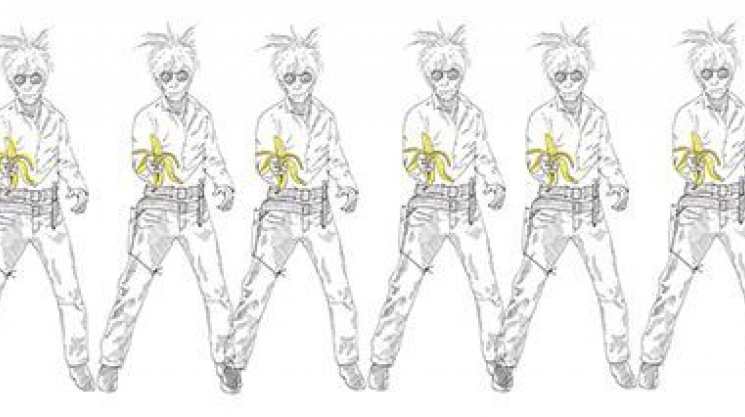 Andy Warhol was born sometime during the Great Depression as Andrew Warhollingsworth. He shortened his name soon after he moved to New York City in an effort to be more relatable to the art school kids he was trying to gain favour with(1). He became most famous, ultimately, for being the inspiration for the band name of the Dandy Warhols. Their early 2000s megahit “Bohemian Like You” brought the name Andy Warhol to the forefront of pop culture discussion in an attempt to parse the dense metaphysical underpinnings of one of the world’s great works of art. For years, there was childlike wonder as tweens learned that Andy Warhol was in fact a man, not just the inspiration for a band name(2).
Warhol had a number of his own accomplishments that, had the Dandy Warhols not come around, would have made for modest entries in some history books. He painted a couple of cute soup cans and a portrait or four of Marilyn Monroe(3). He participated in an art movement known as “pop art,” which again would have been relegated to the dust bins of history had pioneering artist Lady Gaga not resurrected this obscure bit of trivia with her album “Artpop.” Fortunately for Andy Warhol’s legacy, he appears to have inspired a number of famous artists while remaining relatively obscure himself(4).
Warhol made a bunch of films in a warehouse space in New York that he called the Factory. I don’t think anyone has seen these movies. Maybe film school kids. These movies are apparently unwatchable. Someone prove me wrong.
Andy Warhol’s place in the prematurely grey famous person power rankings is as follows:
1. MCA(5)
2. Roger Sterling
3. Anderson Cooper
4. Andy Warhol
5. Dead Fucking Last. Richard Gere(6)

Warhol has been depicted in a number of films, most infamously in the movie “Factory Girl” starring charisma vacuum Sienna Miller. He was portrayed adequately by Guy Pierce. “Factory Girl” suffered most greatly from having a cardboard cutout of Hayden Christensen attempt to play a Bob Dylan surrogate in the movie(7). Who knows, maybe this movie was okay. It’s the only movie I’ve ever walked out of in theatres. Warhol was also depicted as an alien by Bill Hader in “Men in Black 3.” It’s the only thing I remember about the entire movie aside from one decent joke about car theft and racial profiling in the 1960's(8). Again, Warhol’s legacy is enhanced by these boosts in popularity because without them absolutely no one would know who he was. We’re probably three years away from a biopic starring Eddie Redmayne, which will conclude his effeminate-character-Oscar-bait phase(9).

1 It didn’t help that he went grey crazy early in life and was worried about appearing like a British aristocrat to the hipsters of his day.
2 Similarly to how there are an unsettling number of tweets by young persons learning that the Titanic was, in fact,
a real boat and not just a plot device for Leo and Kate’s 1997 romance.
3 Yawn. How derivative!
4 It’s a real Velvet Underground situation, where the artist gains more from their subsequent inspiration than initial fame. Unsurprisingly, Warhol designed a cover to a Velvet Underground album.
5 Rest in peace. I miss you every day.
6 Fuck you and the gerbil up your butt, Dick Gere.
7 Which, if I recall correctly, wasn’t allowed to be named Bob Dylan because the real Dylan wouldn’t let his
name within a light-year of this fiasco. A real Jackie Jormp-Jomp sitch.
8 My editor will wrongly tell you this movie is hilarious
and worthwhile.
9 We get it already. He’s pretty and has lips like a girl’s.