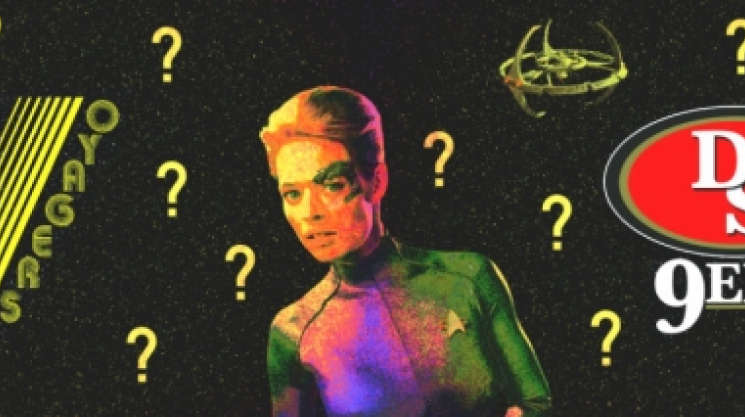 Deep Space Nine [1] was a television show that ran something like five seasons. It took place in the Star Trek universe and dealt mostly with a crew aboard a deep space base. I guess the base could fly around and stuff or maybe the show was literally just people visiting and fucking shit up constantly, or else I don’t really get how you have a show. I’ll be honest, I’ve seen most of Next Generation but maybe half an episode of DS9. Mostly what I remember is photo spreads of Jeri Ryan in her Borg [2] gear in TV Guide [3].

I’m going to level with you again, I’m pretty sure Jeri Ryan was on Voyager and not DS9 [4], but seeing as how my entire knowledge of non-TNG [5] Trek comes from re-runs on Peachtree TV as a teen, the only thing I remember is Jeri Ryan in tight fitting clothes that – I’m assuming – got strategically removed during the course of each episode [6]. Anyways, regardless of whether Jeri Ryan was on DS9 [7] she was a Borg who was trying to learn humanity and suppress her hive-mind tendencies, even though TNG covered this plot a hundred times better when they gave Geordi [8] a pet Borg named Hugh.                                                    I think Kate Mulgrew was the captain on DS9, but if she wasn’t then the black guy was [9]. And if Jeri Ryan wasn’t on DS9, then the most attractive person on the show was the doctor, who I am completely certain was on the actual show. The doctor was on at least one episode of TNG and oh boy, what a handsome man [10]. I’m really hoping that he was the main character, because he fucking should have been based on attractiveness alone. Worf from TNG was also on DS9, because what else did Michael Dorn have to do ever [11]?

One time around five years ago I went to the Vancouver Star Trek convention and saw Armin Shimerman [12] do a panel and that’s how I know he was a hundred percent for sure on DS9 and played a Ferengi. He was the bartender I think, which is weird because I always thought Ferengi were treated like garbage people. Anyways, Armin did a monologue from King Lear and it bummed me out that this dude who thought he’d be doing Shakespeare forever had to dress up like a real fuggo and play a pretend alien for years to make a bunch of money. Stay in school kids!

[2] Half-robot people who all wanted to be part of one hive-mind.

[3] I feel like there was some FHM or Maxim spreads, but a cursory Google search provides nothing. Regardless, Jeri Ryan was a super bodacious babe.

[4] My brother, when asked about DS9, replied with “uh, is that the one with the hot Borg?”

[5] The Next Generation for those of you who are non-acronymically inclined.

[6] And through doing so, sexually awakened many young nerds.

[9] I can’t even hazard a guess at his name for the sake of comedy due to the overwhelming fear of appearing racist.

[11] Last I heard, Dorn is still trying to get a Trek series where Worf is the captain. That bums me out a bit, but if the entire show is just people shutting Worf down like that ten-minute supercut on YouTube, then I am totally down.

[12] I apologize to Armin for butchering the spelling of his name.