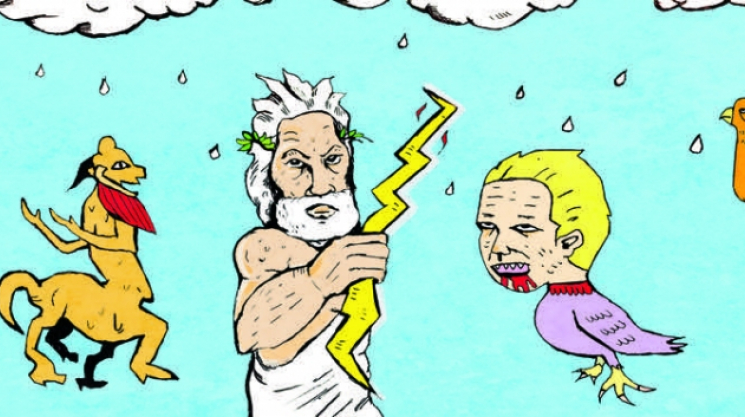 . Back then they obviously weren’t “myths”, but their belief system. I’m hoping there was a bit of time between establishing their pantheon of gods and discovering trigonometry, because I don’t totally want to believe that while Pythagoras figured out his theorem, the Greeks also believed that a thunder god turned into a cow to date-rape a woman he found smoking hot. Anyways, the Greeks believed that a bunch of gods lived on a mountain and they were petty and vengeful and were basically superheroes

The leader of the pack was Zeus, who was sort of a straight-up mix of Thor and Odin, except way hornier. He was married to, I want to say, Hera

? She was not super impressed with Zeus, because he boned down a lot to create both new gods and demi-gods. That is to say, a lot of the time gods were born in some capacity, except for one who launched herself out of Zeus’ face, fully formed. And she wasn’t killed immediately. I guess Zeus had a soft spot for face-babies? Anyways, I’m pretty sure the face one was Athena, the goddess of wisdom and knowledge. Zeus had brothers, who ruled the oceans and hell, which doesn’t seem like a totally equal split in responsibility, but I’m not Greek so what do I know? The Ocean one was pretty neutral-ish I think, since the sea is a cruel mistress, but the hell one was obviously a bad guy

. He’s the antagonist in probably every myth except for the ones where Zeus impregnates a sleeping lady

. While they weren’t the first to do this

, they really captured hearts and minds with their bull-men, snake-hair ladies, horse-people and lion/scorpion/eagle hybrids. Most of the best remembered Nature’s Mistakes came from Greek mythology.

I would be doing myself a disservice if I wrote this whole thing and didn’t talk about Hercules. Hercules was a product of Zeus boning a human lady. I don’t remember the specifics, but hopefully it was a consensual one. Hercules was super strong, did twelve amazing tasks as a bar bet with Hades, and got a Disney movie made about him. I mean, he’s had a ton of movies made about him. Basically, whenever there’s a young, white, male, attractive actor who hits the gym extra hard for a bit, studios fall over themselves to make yet another Hercules movie. Recent years had both Dwayne “Rockman” Johnson and Kellen “Lutzy” Lutz take on the role. Both movies were horrible. Actually, here’s a blanket statement: every Greek mythology movie has been pretty shit, with the exception of the skeletons in Clash of the Titans, because Harryhausen had some stop motion skills.

My math on that is that it had to be before Jesus, right? And it was also probably after the Egyptians, which was like four thousand years ago. I should probably do another entry on ancient Egypt.

Not to mention when Marvel got super lazy inventing new superheroes in the late 1960s and early 1970s, they just made comic books with Hercules, Thor (Norse, I know) and Ares.

I will, 100% for sure, screw up Greek and Roman names for the same gods roughly twelve times in this article.

Total nature vs. nurture debate with Hades. Was he evil before he ruled hell or did he become evil because he ruled hell? No one knows (read: cares).

I remember a child’s book on mythology I had when I was a kid and the very careful language they used around Zeus’ infidelities is funnier than anything I could ever write in this entry. The fact he usually did while disguised as an animal really made me wonder what people were allowed to get away with in ancient Greece. I imagine at some point, some guy sees his wife being, uh, intimate with a swan and she’s like, “It’s Zeus!” and he’s okay “Oh, okay.”

Basically a society of seven-year-olds who spend summer afternoons coming up with the deadliest animals.

Again, I should write about Egypt again.