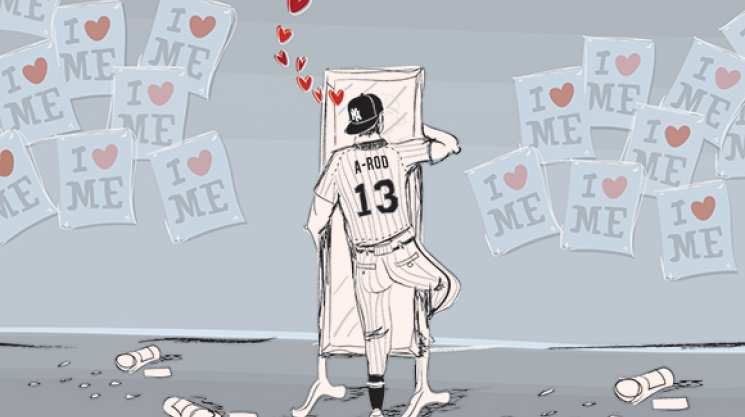 The Encyclopedia Hearsay was founded on four principles: misinformation, rumours, half-remembered conversations and outright lies. Anyone can contribute so long as articles are written with no research whatsoever. If you are citing The Land Before Time as a source or abusing footnotes like David Foster Wallace, you are on the right track.

Major League Baseball is a sport that is immensely popular in Japan, Central America and the United States. The central concept is simple: hit a thrown ball with a bat and run to somewhere before the hit ball is recovered and arrives at your intended destination before you do. There are about a billion more rules. Major League Baseball is legendarily famous for being boring as hell, unless you go watch it live and are either a good heckler, or near a good heckler. Baseball is known as America’s pastime.

Baseball is recognized for having almost zero likeable superstars. Everyone who is likeable ends up selling out and going to the Yankees or the Red Sox. That was a big plot point in Moneyball1. After the good players left the Oakland A’s, Brad Pitt recruited Chris Pratt, but I doubt real life baseball has anyone as likeable as Chris Pratt2. The superstars in the major leagues3 are guys like A-Rod, who once did a photo shoot with Details Magazine where he makes out with his reflection in a mirror. San Francisco is known for having a successful team with some likeable people on it, like Brian Wilson4 and Mitch Kramer from Dazed and Confused, but no one you’d call a superstar.

One reason baseball became crazy popular is because, before steroids were a huge problem, statistics can be compared across generations5. Babe Ruth can be compared to Hank Aaron can be compared to Ken Griffey Jr. can be compared to Mike Trout6. Then steroids came around and guys who were in the twilight of their careers started demolishing baseballs. There was an amazing Sports Illustrated cover where Mark McGwire and Sammy Sosa were wearing togas7. Then people figured out they were on steroids and got bummed out8.

Baseball was invented in the early 1900s. Maybe even earlier9. The Major Leagues were invented by a bunch of white dudes who didn’t allow black dudes to play. The quality of play suffered like crazy, because all the white athletes back then smoked like chimneys and drank while playing. Then Jackie Robinson came around and fucking dominated. That was the first major race renaissance in the MLB, followed by the Japanese and Latin booms10.

Every single action in baseball can be quantified, since it’s such an individual sport11. A lot of things in the game can be predicted due to the amount of numerical analysis done on the game. But people love the game for the crazy, isolated miracles and events. One time, Randy Johnson, who is like 7 feet tall, hit a bird that had flown in a thrown ball’s path. It was bonkers. Another time, a fan from the stands caught a near homerun out of the glove of an on-field player who was jumping into the stands to make a catch. This event caused the fan’s team, the Cubs, to miss or lose12 the World Series13. One time a player dropped acid and pitched a perfect game14.

1. Bennett Miller, 2011.
2. He’s basically a human Golden Retriever.
3. Or “the show,” as I learned it’s called from The Natural.
4. Not the Beach Boy.
5. People love best-of-all-time debates.
6. This is one of about five current MLB players I know.
7. You should Google this.
8. Though, honestly, how sweet would it be to see everyone in the league taking performance-enhancing drugs?
9. The only person who knows for sure is Ken Burns, but no one has sat through his entire 93-part documentary to find out.
10. The Jewish boom is still on its way.
11. Moneyball again, since everything I know about baseball is from that movie.
12. I don’t remember or care.
13. This guy hates his life.
14. There have only been about 20 perfect games in MLB history. It’s where a pitcher throws a no-hitter and later finishes Contra for Nintendo with one life.