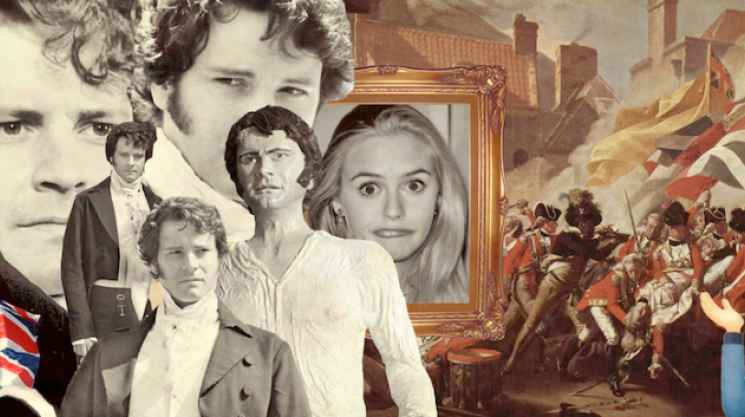 Pride & Prejudice is a book by Jane Austen from like 1870. Okay, I’m going to start off right from the get go that there’s like 300 years of British history that might as well happened all within the span of three years in my brain. Everything from like Henry VIII to Queen Victoria to Jane Austen to Wuthering Heights to whatever happens in Outlander to William Wallace to Rob Roy

to other 1990s historical dramas is all one big blur. Most of what I know is from Dr. Who, so if you’re someone who really cares deeply about England from 1700-1910, I am so sorry for what you’re about to read.

. Most or all of the sisters are being groomed for marriage obviously, because that is one thing about Victorian England that I know. The willful one is the main character and her name is almost definitely Elizabeth or Catherine. Then there’s this asshole guy that wants to marry Willful Elizabeth

and his main characteristic is he’s kind of a dick. I’m picturing this story as a bit of a reverse or double Taming of the Shrew sort of thing and asshole guy is Heath Ledger from 10 Things I Hate About You. Except asshole guy is named Mr. Darcy and is played by Colin Firth in at least one of the movie adaptations of this book

Anyways, it’s Jane Austen, so I’m sure the writing is really good and there’s clever wordplay of all the main characters making fun of each other. Eventually there’s a misunderstanding where Mr. Darcy is scared off of marrying Willizabeth and she almost marries someone else

but then he comes back and marries her anyway and it’s very romantic in its own way. I’m guessing all or most of the other sisters also get married. I don’t think this is one of those stories where one of the sisters dies, but maybe it is? I don’t think so anyway. Maybe in Pride and Prejudice and Zombies. That’s all I’m going to mention about that movie, because I’m not sure I can joke about a joke.

Jane Austen was pretty important, literature-wise, obviously[8]. She wrote other ampersand-containing books like Sense & Sensibility, Love & Friendship and Tea & EastEnders. She is best remembered in my mind for writing Emma, which Clueless is based on, and anyone who was directly responsible for Clueless is a hero in my mind. This world would be a lesser place without footage of a young Paul Rudd charming it up all over Los Angeles. So thank you, Jane Austen, for Paul Rudd.

So that’s Mel Gibson and Liam Neeson accounted for. I can’t remember what historical drama Ralph Fiennes was in where he plays a British folk hero, but there has to be one, right?

I know brash isn’t super different from willful, but I ran out of adjectives pretty quickly.

If I’m right about any of this, I am going to be very impressed with myself.

I am sure there are at least forty BBC productions of Price and Prejudice and Colin Firth is in half of them.

The fact Colin Firth wasn’t in any Harry Potter baffles me to this very day and is the main cause of me losing sleep. I’m convinced they’re making a Harry Potter spin-off for just him, with maybe Colin as old man Harry Potter.

Because come on. There is always some other poor schlub just waiting around in stories like this.

My understatement game is strong in this entry.