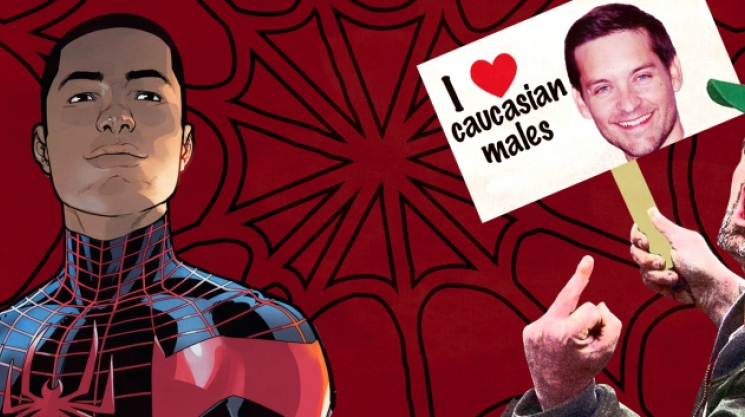 Spider-man is a Marvel Comics character invented by Stan Lee around 1962. He first appeared in Amazing Fantasy #15 with probably one of the most iconic comic book covers of all time. He started off simply enough: getting bitten by a radioactive spider and instead of contracting some rare form of cancer, he got superhuman powers. The sheer fucking craziness of his stories in recent years is not documented often enough and I’m going to do my best to go over some greatest hits of his you might not be aware of so now you’ll be able to talk to comic nerds and incredulously ask them, “This is what you like? Really

Okay so to get the basics out of the way, yes, Uncle Ben gets killed, yes, there’s power and responsibility speech things, yes, Aunt May and Gwen and Mary Jane were characters. The canon way he shoots webs is via mechanical web shooters, not via infinite supply of newfound bodily juices as the Sam Raimi movies posit

. Most people’s knowledge of Spider-man is solid up through the 90s. Gwen dies after she’s thrown from a bridge. Peter and Mary Jane get married. Uncle Ben, to the best of my knowledge, never really comes back except in hallucinations.

continues to mutate and turns into an actual spider/man complete with extra arms and compound eyes. You might remember this from the 90s Spider-man cartoons that played on YTV in perpetuity

. I liked this story only because it’s dumb to assume a poison spider biting a person would imbue them with only good effects. Maybe all of Spider-man is just the hallucinations of a dying man as radioactivity works its way through his system slowly killing him and driving him insane.

is upset that Peter and Mary Jane have such a happy life and also Aunt May is dead or dying so he cuts a deal with Spider-man to erase the last like 30 years of comics continuity so that he and MJ never got married but May will live. It’s one of the laziest retcons

ever published. Anyways, it concludes with Peter being single and like 20-something and Aunt May is still alive, even though she’s 1000 years old and should have probably just died.

Next, there’s a story where Peter dies, kind of, and Doctor Octopus transfers his consciousness into Peter’s body and becomes Spider-man for a long time. And this was one of the best Spider-man books in years! This shit! Seriously! Doc Ock thinks he can Spider-man better than Peter, but Peter’s consciousness is still floating around somehow and eventually they have a mind-fight and Peter gets back control of his body. But then he died again and Marvel combined two of their story universes so that the main Spider-man in their main universe

. If that was all nonsense to you, congratulations on not ever having cared about any of this because it is dumb. So so dumb

. That being said, making main Spider-man half-black half-Latino was awesome for making white supremacist nerds upset, and if anyone should be upset 100% of the time, it should be them because they are terrible

Keep in mind, I feel like I can call all of this dumb because I love comics so much but also think they’re pretty dumb.

Oh right, three paragraphs into an entry on Spider-man and I forget to mention his real name.

Along with the X-Men cartoon with the rad opening credits.

Mephisto, who is the Marvel universe version of Satan.

A comics term for retroactive continuity, or editing the past once it gets too unwieldy, which happens pretty often given the decades of Marvel and DC stories that get so next-level bananas that sometimes they just need to reset everything.

Earth-616, which is a fact that makes me so upset that is stored in my brain that I can’t describe the feeling with any true clarity.

Miles Morales, if any of you care.

But I still love it.

Imagine being upset that the pretend cartoon person you like was colored a little bit differently for a little bit. I hate the saying “I can’t even” but that shit makes me can’t even.