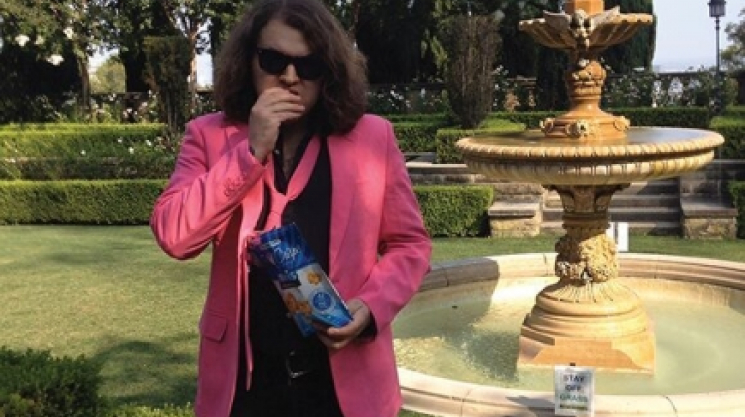 When the nice folks at ION first got in touch with me about doing this interview, they acknowledged that I have a track record of being, shall we say, less than friendly to the majority of music journalists who have crossed my path. In my defense, every journalist who has been sent to interview me in the past just happened to be a barely literate failure of a human being. My backstory – promising whiz-kid turns misunderstood genius turns a different kind of misunderstood genius turns decrepit acetaminophen addict/contemporary Christian recording artist turns yet a third kind of misunderstood genius – isn’t that hard to get the hang of, but whatever. Maybe my standards are too high.

So when the people at ION, bless their hearts, went ahead and asked me who, if anybody, I thought would be capable of having a good-natured and respectful conversation with me, I gave it a good, long think – honestly, I did. And then I realized that there is only one person that I truly respect and trust enough to interview me: myself.

Still, you can rest assured that this is no self-aggrandizing fluff piece. I take myself and my work seriously, and I wasn’t afraid to ask the hard questions. I went deep. Real deep.

So, how does it feel to have created something so extraordinary that everyone who hears it immediately recognizes it as the most important record they’ve ever encountered? What about your work do you think is resonating with them on such a profound level?

It feels deserved and appropriate. I think people connect with the work because they recognize me as their emotional and intellectual better.

Agreed! Although I think your ex-wife, Misty, would take issue with that. And so would many of the journalists who’ve interviewed you previously.

They’re all wrong, though. I’m the best.

Misty does continue to work with you, though.

Yes, but we certainly don’t get along well, especially after the incident with those Amish teens at the Chicago Doubletree back in ’09 – teens who, I would like the record to show, were not only of age, but were technically engaging in a traditional practice called rumspringa at the time, so really, if anything, I was helping them out spiritually. But she recognizes the quality of my work. When the opportunity to work at this level is made available to you, you stick with it, even if it makes you unable to enjoy traditional Pennsylvania Dutch crafts for the rest of your life. Or staying at the Doubletree, for that matter.

For those readers who aren’t familiar, would you care to explain the incident in question?

Ok. Is it true that you once had a yacht you’d named “Walter Becker (of Steely Dan fame)” just so you could tell Becker to his face that you owned him?

He cut the guitar solo I recorded for “Peg.” It was better than Jay Graydon’s, obviously; Becker just wanted to spite me because I’d invited him to go eat some shrooms at Disneyland, but then I changed my mind at the last minute and he ended up being high by himself in the Enchanted Tiki Room for nine hours. He was always a baby that way. Like, if I had a dollar for every time I’ve gotten stuck tripping balls alone in the Tiki Room…I’d still have that fucking yacht, for one thing.

Instead, you fell on some hard economic times, and Becker actually bought the yacht from you for the sole purpose of setting it on fire before your very eyes. So my question is, when and how are you going to get him back?

I dunno, man. Have you heard his most recent solo album, “Circus Money”? I love kicking people when they’re down, but not, like, that down. But enough about Becker. Let’s talk more about why I’m amazing.

Well, how about your live show? You play almost every instrument on your album, but nothing at all on stage. Why is that?

Nine times out of ten, watching someone play an instrument is about as interesting as watching someone else watch “King of Queens.” Like, I’m glad they’re having fun, but it’s pretty selfish to think that kind of activity deserves an audience. There’s exceptions, obviously – Sonic Youth were always compelling in this regard, same with Prince – but even the vast majority of top-tier musicians, there’s just nothing interesting to focus on. Audiences deserve to be entertained.

Right. Many fans claim that there’s almost an Elvis-like aura to your show.

I met the King once, you know. Not, like, physically, of course – I was doing an ayahuasca ceremony with my shaman, Geoff, down in Kauai in ‘04, and there was this toucan who just started singing “Return to Sender,” and I just knew, you know, it was his voice. I just knew that it was him, and he was giving me his blessing.

You’re very fond of the pink and black color scheme. It’s not just the basis of your stage outfit, but also a key component in the layout of your album cover, and even the color of the vinyl. What’s the significance?

A few years ago, Martha Stewart — who I was seated next to at the CMAs — explained Louboutins to me. They’re these women’s shoes that look like regular women’s shoes, but cost like a trillion dollars because some asshole painted the fucking sole red. Like, by using this primary color, one that everybody knows and sees everywhere all the time, in this one specific way, they are able to telegraph value and quality without having to actually do anything. You just know it when you see it. That is just fucking brilliant.

So that’s what I’m doing. This specific combination of pink and black means me now. It just does, because I said so. When I use it, you’ll know that it represents a certain degree of quality and sophistication, and that whatever I have applied it to is worth up to a trillion dollars of your money.

Good points — but I happen to know that pink and black was Elvis Presley’s favorite color combination during his early years. You’ll find a lot of pictures of him in those colors. I’m going to assume you knew that as well.

Ok, yes. You got me. But the toucan gave me his blessing, so it’s all cool. I’m not sure why you would contradict me like that, though. I thought we were on the same team here.