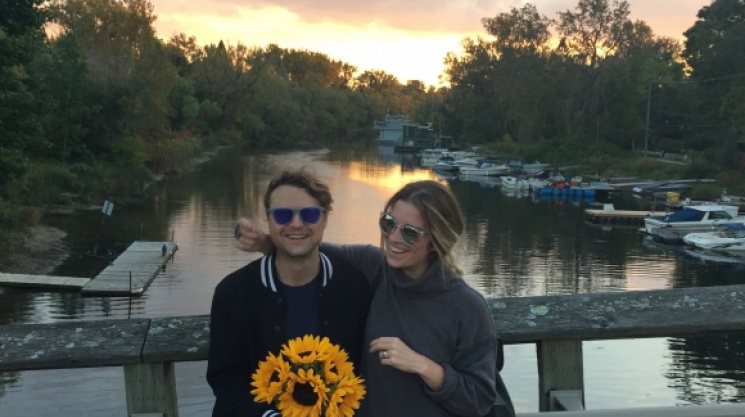 Last week in The Local, we heard from Lucky Bromhead -- the talented personal makeup artist for Catherine O'Hara and Annie Murphy from the hit comedy Schitt's Creek, so this week we though we'd hit up Annie and her husband, Menno Versteeg -- singer of the rock band Hollerado and owner of the indie label, Royal Mountain Records -- to hear what they had to say about their favourite things around TO.

Where do you guys live?

Annie: I also live in The Junction in Toronto. In the exact same house, coincidentally.

Menno: The Purple Onion. We go there all the time because its's close to our place and Annie likes it. I actually don't really like it.

Annie: I actually like to go to The Starving Artist because waffles come with everything. It's not the greasiest spoon, but it's 100% the waffliest.

Annie: Hawker Bar on Ossington, which is conveniently located next to Bobbie Sue's Mac and Cheese, so if you're feeling particularly gluttonous...

Annie: Going on giant walks across town, going to the island in the summer, finding new restaurants, going to baseball games, convincing people to take me sailing, sitting in parks, going to comedy shows. GUYS THIS CITY IS GREAT.

Menno: Toronto has so many cool neighbourhoods and long streets. We love going on walks from our place in the west end all the way across the city on one of the main streets like Bloor or Queen. When we get to the East end of town we have a delicious dinner at a place we have never been to before. Greektown and Little India on the east side have countless amazing spots.

Annie: If you start at Queen and Roncesvalles and walk to Queen and Yonge with vintage shopping on the brain, you will love/hate yourself by the time the walk is over. There's also an awesome store on Roncesvalles called Likely General that sells clothes and all things beautiful.

Menno: Lately I've done a bit of splurging at Topman, mostly for pants, but other than that thrift stores and shirts from bands I like. My friend Dean told me Hamilton has some great secondhand stores, so next time I'm there, that maybe?

Annie: Whiskey or Tequila. Or white wine. Or just make me something delicious.

Menno: Indie Ale house in the Junction makes great beer and they sell it to go until 11 on most nights, which is better than any LCBO.

Annie: Jason Bartell - he's one of those people that can draw pictures that people put passionate bets on about being photographs.

Menno: My friend Brittany makes really cool art and jewellery and stationary and notebooks and cookbooks and basically everything else. Check out @BrittPaperScissors on Instagram to see what I mean.

What do you love about TO?

Annie: This city is full of passionate, creative people, and because of that there's always something to see and do and eat and drink. I love my neighbourhood because I can walk to the book store, the grocery store, the coffee shop, and the bar in two tiny minutes.

Menno: Our neighbourhood is just far enough from downtown to have a bit of a real community feel. It's nice knowing the people at my local coffeeshop (Full Stop Coffee is the best!) and bar (that would be Dre and Dahlia and all the regulars at Delrays Grill).

What's a spot that no longer exists that you really miss?

Menno: From time to time I still think about one of the greatest all-time venues, Salle de L'X in Montreal. There is no chance a place like that could have ever have existed in any place outside of Quebec. That was the place that taught me everything I know about DIY and made me want to do music for my career. I saw so many great and awful bands there and also a ton of 17 year-olds fall down the stairs.

Annie: There was a cheap and awesome mom-and-pop restaurant in The Junction called Sunnyside Cafe. They always put out their patio furniture a month too early, and would make you things that weren't on the menu.

Menno: There is a bar down the street from us called Shamone. I haven't been there yet but it seems like it's named after the word Michael Jackson shouts in many of my favourite songs. And if that is the case it has got to be a very cool bar, which I will be checking out as soon as patio season arrives.

Annie: There's an incredible seafood restaurant in The Junction called Honest Weight. They change their menu every day and everything is drop-dead delicious.