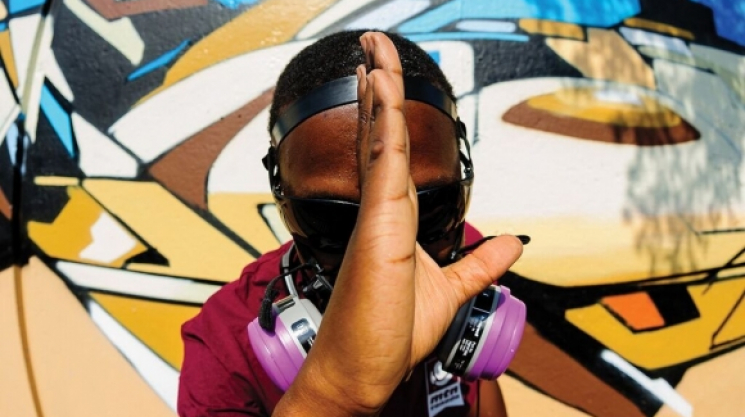 Expression being a fundamental human quality, it should come as no surprise many artists find a voice through graffiti. For Mediah, one of Toronto’s pioneer artists, his work is intended to have a spiritual aspect. “You’re supposed to feel it on the inside; it’s supposed to give something to you.” Experimenting with different mediums is what inspired his pseudonym. In his early work, he thought he could do graffiti with any medium, on any media. With a background in visual effects for film and television, the compositing aspect of digital media greatly influenced his art’s look and his artistic approach. “In VFX, we do a lot of compositing. Basically, that means taking different elements and bringing them together to make one overall image. A lot of my artwork works that way. I’ll do multiple drawings and then I’ll composite them together.” Raised by writers known to think outside the box, his technique has nothing to do with a sketchbook. As a matter of fact, Mediah believes one’s best sketch is in one’s head, forcing oneself to paint freestyle.

While Mediah used to paint letters and such, his style evolved as his influences changed. As the flow of fresh inspiration from artists like Marcel Duchamp grew, he took a greater interest in making people feel rather than interpret. “Since then [the newer influences], it’s been all about the motion, force and the feeling of movement, which can all really take people on a journey.” From his viewpoint, the motion and dimensions between point A and point B are most intriguing. “This dynamism thing I’m trying to do basically merges everything together so you can’t really separate what it is,” says the Toronto-based artist. “I’m a multidisciplinary artist in that way. But I’m a 100% graffiti artist, I’m a 100% fine artist and I’m a 100% digital media artist at the same time. What I do, all put together, is one entity.”

It’s crazy to think that thirty years ago the Queen alleys in Toronto were ‘naked.’ The evolution of graffiti is very telling and interesting, especially for urban anthropologists. Each city has its own story, relating the changes in time and social aspects. In Mediah’s opinion, “Toronto used to be known as a square, corporate city, but it’s now changing its image. The scene changed a lot. Back in the days, it was nothing like this.” Resembling New York, ‘The 6’ has an everlasting love-hate relationship with graffiti. The past two mayors vowed to eradicate all graffiti from the city, which resulted in a bombing revolution. The recent developments have made it difficult for citizens to spot the difference between vandalizing and graffiti public art. However, attitudes will only shift when understanding deepens. “Graffiti writers, especially those with lots of experience, have to take matters into their own hands and educate people. Only then can people understand the culture behind graffiti.”

This bombing phenomenon wasn’t always around though. In the ‘90s, for instance, it was more about pieces. Toronto’s early days were influenced by New York City and Philadelphia: straight letters, outlining, 3D, flares and forcefields ruled the streets. Among the original graffiti writers, few are still active, with most of them having retired or slowed down.

An in-depth analysis of the evolution of Toronto’s graffiti scene would require a book, but the uneasiness experienced amongst several graffiti artists regarding the emergence of the city’s street art deserves a mention. Back in the early 2000s, when street art made its first appearances, the movement was mostly about wheat pasting and stenciling. Suddenly, those new artists were given more attention, praise and recognition than graffiti writers who’d been shedding sweat ever since the ‘90s. Mediah, for instance, was very critical of the movement at first. “It made people who set the standards for public artwork, legally or illegally, weirded out. It made us [graffiti writers] feel estranged. They didn’t come up the right way. They hadn’t paid their dues in terms of finding their style, a unique voice and a name. At the time, especially with wheat paste and stencil, it felt like they were cutting corners and they were getting more credit while taking the easy way.” Nowadays, with initiatives like Street Art Toronto and huge mural paintings throughout the world, the tension between both movements – graffiti and street art – is somewhat relieved, as graffiti writers tend to respect more of that work, seeing it requires talent and skill. “Where there is a gray area,” says Mediah, is when “street artists don’t understand the rules that we [graffiti writers] put in place. Graffiti writers were the trendsetters; we were here first and set the precedent for the culture.” For the Toronto-based artist, originality and style should be what artists put in the most work for. And he wants to see more of that. “What is your personality? Rehashing stuff is easy. What are you going to bring to the table and culture?”