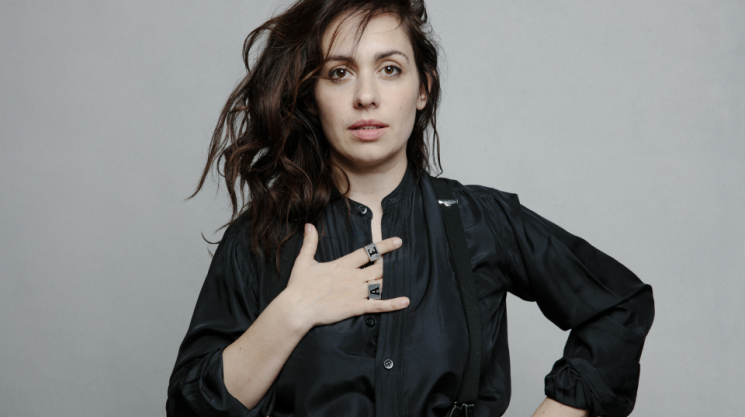 It’s a chilly morning in Montreal when I get ahold of Ariel Engle on the phone. She is going on a morning walk and sets the scene for us. “It’s a chilly but beautiful morning just walking down Fairmont beside a bagel store. It’s about -2 degrees and there is a lot of snow. It’s all very Montreal”, she says with a laugh. You may know Engle as one of the members of the mighty Canadian collective Broken Social Scene, but you will definitely start to know her more through her solo project La Force. Her self-titled debut album is a bold artistic statement. A dense collection of songs, filled with strong imagery and first-rate musicianship that is all buoyed by Engle’s sharp and confident vocal melodies and delivery.

The La Force project came about from the ashes of another band called AroarA that she had with her husband and BSS bandmate, Andrew Whiteman. As Engle explains, the dissolution of that act all culminated during a hectic and transitional time in their lives. “Our daughter was three years old and we were trying to wrap our heads around this recording that we were doing while at the same time my dad was dying,” she says. “I found myself at a real crossroads in my life. I was a parent for the first time while I was losing one of my parents.” While any single one of these situations wouldn’t be easy for the best of us, Engle and Whiteman also found themselves unable to work together. “We were in the midst of all this,” Engle describes, “and it was clear that myself and Andrew weren’t enjoying making a record together. We were in a band together, married, parents and trying to work on another project. Andrew just said to me one day, 'I just want to miss you.'” Serendipitously, Engle received a call from Warren Spicer from Plants & Animals saying that he loved their work and, if they were interested, would love to work with them. Engle ran with this and her and Spicer re-recorded and wrote some new tracks, of which would eventually become La Force. “He really helped me land what I was looking for.”

With the album done, it was a good opportunity to take the project on the road for Engle’s first time as a solo artist. She has played side musician to numerous projects over time and now having her first real solo project was a new step for the artist to actually, for the first time, feel confident in calling herself a singer. “Broken was really my coming out party for this. I didn’t feel comfortable calling myself a singer until I was in my thirties. I had done a lot of work with people but nothing where my heart and soul was really on the line like it would be with this project.” La Force’s first live run was in Europe supporting Feist. “It was just a duo, myself and a drummer,” says Engle. “I found myself standing up onstage, way more exposed than I had ever been. Whatever happens up there onstage, good or bad, is all my fault and it made me realize that this is not a dress rehearsal. You don’t have to take everything so seriously. I feel when you are a little looser it’s conducive to a better show.”

Having grown up all over the world by musician parents, Engle is used to the touring lifestyle. “My parents were real music lovers. Most of my formative memories involved being with them, listening to their records at home and going out to see music.” This is similar to the family dynamic that exists with her and her husband in Broken Social Scene. “There’s so many people in Broken and even that being said no one ever really leaves the band. It’s so powerful being onstage with so many people. That’s where a lot of the power of the project comes from. It’s a true collective, and live, the audience becomes a part of that.”

Now with La Force touring for most of this year it’ll be exciting to see how powerful the impact Ariel Engle has with her personal audience. If anything, judging from the intricate, beautiful and artistically satisfying record she released this last year, the answer will be very powerful.