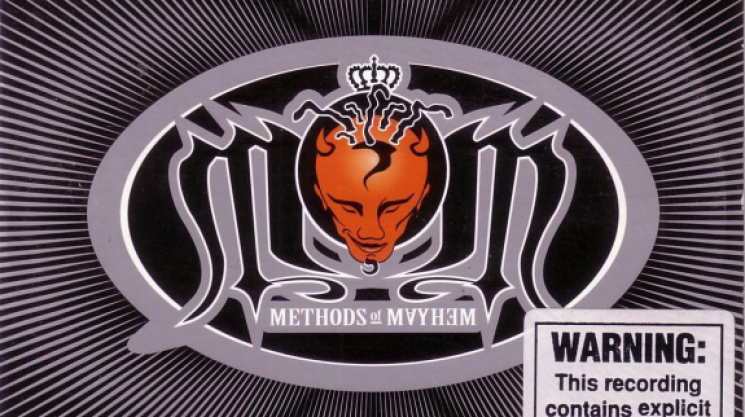 When an aging filth rocker approaches middle age he’s left with two choices: mellow out like a milk-drinking, minivan-driving sucker or reach down into that scum encrusted toilet bowl for fresh inspiration. In forming the rap metal supergroup Methods of Mayhem, Tommy Lee, legendary Mötley Crüe drummer, was seemingly bent on continuing his wild ways and breathing new life into his floundering career. And although Mötley Crüe were renowned for their insatiable appetite for “Girls, Girls, Girls”, Lee nevertheless felt compelled to raise the stakes with Methods of Mayhem, proving to the world that he still oozed edginess and predatory male sexuality. “Get Naked”, from the group’s self-titled 1999 debut album, pulled no punches in serving up a disgusting slab of aural excrement straight from Lee’s pasty butthole, which conveniently enough was branded with Methods of Mayhem across it, demonstrating to any would-be naysayers his wholesale commitment to the cause.  But while Lee’s devotion to his “passion project” might not have been in doubt, the quality of the music certainly was, to say nothing of the band’s stomach-churning lyrics, particularly on “Get Naked”, a song best consigned to the sex offender registry of history.

“Get Naked” opens with Lee tackling the subject of his infamous sex tape with ex-wife Pamela Lee, bemoaning the fact that the Internet Entertainment Group and others were profiting from intimate footage culled from his honeymoon. “$77 million made from watching me cum under the sun on my vacation,” he laments, describing a harrowing tale as old as time itself. He then dives into the nuts and bolts of the proceedings, complaining that he isn’t being paid to “entertain your bridal showers,” where he imagines revellers watching him “shooting my jizzy-jizzum” after his woody “has rizzy-rizzen” to the occasion. Slow down, Tommy. That’s a lot of detail. As if that weren’t enough, to punctuate the open-minded, hedonistic atmosphere evoked by “Get Naked” the video is centred around a nude Tommy Lee watching TV in a hotel room, complete with remote control in place of his erect wiener. In fact, EVERYONE in this shit show is naked – save for Limp Bizkit frontman Fred Durst, who makes a baffling cameo to riff about “blue balls” and “ass cheeks,” yet refuses to embrace the spirit of “Get Naked” by taking off his trademark backwards baseball cap, jeans, and t-shirt. You picked an odd time for modesty, Fred. Maybe those rumours about his tiny, shrivelled peener were true. Rounding out our cast of douchey dudes is Parliament and Funkadelic’s George Clinton, who mostly sits in a limo watching a cartoon of two dogs fucking, as well as a low-rent troll by the handle TiLo, whose racialized rhymes about a “geisha ho from Tokyo” are truly nauseating. Well, I guess that’s not saying much considering the company he keeps. The only saving grace here is Lil’ Kim. Her arrival lends some semblance of a woman’s presence that isn’t about being a mere object of the male gaze – at least for a moment or two. Kim raps about wanting to “ride the cock ‘til you hit the spot,” and just to make sure the message gets through loud and clear she’s depicted straddling a giant rooster. Oh, wait. I get it now!

The video for “Get Naked” eventually devolves into a shouting match between Kim and Lee carried out over a bizarre kind of satellite feed, or perhaps his “mayhem” was simply reaching fever pitch by this point. Kim berates Lee from street level, insisting that her posse doesn’t want his diseased and rapidly aging member, and who can really blame her? Lee delivers his remarks from the comfort of this already notorious hotel room, where he’s clearly been making himself comfortable for some time. I can only hope Lee possessed enough remaining dignity to throw a do not disturb sign on the door, so housekeeping wouldn’t find him naked on the bed and cradling the TV remote like an erection – AGAIN. But I digress. Despite his foe’s more than capable efforts, Lee appears to get the last word on the matter, declaring to Kim that he isn’t leaving until she’s “sleeping on a cum stain.” Even ignoring this disgusting imagery it’s a heinous remark that somehow fetishizes forcible confinement, one of the most common acts of violence perpetrated by men against women. With any luck there isn’t a statute of limitations on this one. LOCK HIM UP! Then, to tie a bow on everything and bring us back full circle, Lee’s old flame Pamela Anderson shows up, jumping into bed and saving our antihero the trouble of another wasted night jerking off to SpectraVision. Looks like all that filthy exhibitionism finally paid off! Some creeps get all the rewards. For the rest of us there’s got to be a dank hotel room over the horizon where we can get naked to our heart’s delight. Just don’t invite Fred Durst. That chump always keeps his clothes on.