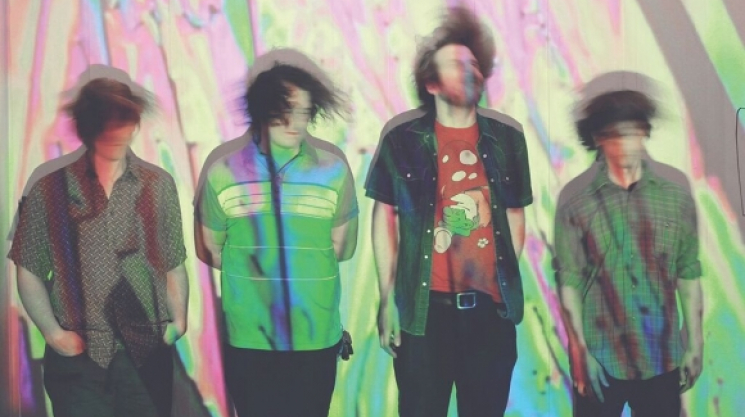 PENICILLIN BABY | SPACE-TRASH & THE END OF THE WORLD

Penicillin Baby consists of Jon Tyler Conant, Charlie Davis, Taylor Lowrance, and Wes Mitchell, who met when they eventually found themselves in Nashville, Tennessee. The band has a surprising obsession with rooftops, and Jon Tyler Conant reflects on how “in almost every city we go to, we find a way onto the roof of some tall building.  It kind of makes me feel like a little kid  again. Being somewhere you’re not supposed to be, up above everything else.” The band just came out with an excellent new single, “Stick it Out,” and Conant told us all about their strangest show, favorite artists, and, of course, the history of space trash.

How did you start off as musicians?

I started out playing in church bands. I come from a pretty religious family in Oklahoma and my family was always involved in music. From the time I was eight or nine, I was always tinkering around on the drum set or grabbing a guitar and attempting to make sound with it. Eventually, I played almost every instrument in the standard church band setup. Not very interesting music, but it taught me how to learn songs fast, and how different instruments should work together.

Your music has been described as ‘space-trash.’ Do you agree with this?

How exactly would you define ‘space-trash’? It more described our earlier sound. The early recordings were done in my garage with some old analog stuff and were pretty lo-fi, so that’s where the trash comes from. And it was kind of a spacey sound, so I just crammed the two words together. It also conjures up some weird imagery of pieces of scrap metal endlessly floating around space with no destination in sight. Could be some type of metaphor in there somewhere.

What draws you to lo-fi music?

I like a lot of lo-fi music just because it tends to be more raw and honest. When things are done quickly and less professionally, the imperfections shine through a lot more, and to me that is what makes things unique. I’m naturally drawn to things that have imperfections. Maybe this is why I can’t stand the majority of modern electronic music. It’s all so calculated and predetermined. There’s absolutely no room for error, which to me means no room for humanization. Humans make errors. Computers make mathematical, error-free lines of code that translate into stale sonic interpretations of what music is supposed to sound like. Even most modern rock that you hear on the radio is almost completely free of real acoustic sounds. It’s all programmed drums and digitally modeled guitar amps. I’d rather hear a dude with great songs on a Tascam four track than listen to a pristinely produced track where everything is quantized and manipulated to perfection to cover the fact that the song is a glorified turd.

What is the strangest show you’ve ever played?

In one of my old bands in college, we played this “festival” in a big barn that was basically falling apart. It was so sketchy that we all thought the thing was gonna come down. We were up on the second floor playing out of this opening that faced into a big field. Later that night, they ended up bringing in some support beams because the second floor started caving in, like, very noticeably. At any moment, hundreds of drugged up college kids could have been crushed underneath the weight of a massive hippie free jam.

What other artists have you been listening to lately?

I’ve always been a huge fan of Television, Modern Lovers, and The 13th Floor Elevators. I think those three bands are kind of our pinnacle of influence. Lately, I’ve been getting into a lot more shoegaze, Brit pop and power pop though. Bands like Ride, Stone Roses, Big Star and Chris Bell. I’m kind of all over the place in the guitar rock variety. I try really hard to not get into too much newer stuff but there are some artists who are totally worth it and can’t be ignored. Courtney Barnett, Broncho, Mac Demarco, Quichenight, Thee Oh Sees. Those have been my top players recently.

How do you feel about experimenting with other media, besides music videos?

I absolutely love working with other media. I’ve done the majority of the artwork for the band up to this point. It was kind of out of necessity, and also because I just love creating visual art. I mostly have just picked up tricks in Photoshop and Illustrator and learned how to fuck up images in a good way. I finally relinquished that duty on our latest release to a guy who works under the name St. Francis Elevator Ride. I saw his stuff a few years ago and was totally blown away. I’ve also made a lot of videos that are used for projections during our set.

You recently released your latest single, “Stick It Out.” What is different about this new track compared to past work you’ve put out?

Well, it’s a much more refined and focused song, like a lot of our newer material that should be out soon. It’s pretty straight forward and to the point in terms of songwriting and I’m actually proud of the lyrical content, which is more than I can say for some of our older stuff. The lyrics are about the world ending and just accepting that there’s nothing you can do. When you realize something is out of your control, you tend to get a lot less stressed about it.

What new projects have you been working on?

We’re just constantly writing new stuff and working on cool things we can do live. I think the live experience and the recorded experience are two very distinct worlds. So we try to put as much time into working up a great live set as we do into writing and recording interesting songs. I have a ton of new songs in the works that we’ll start working on when the time is right. For now, we’re just trying to grind hard on what we’ve got and see what comes of it.