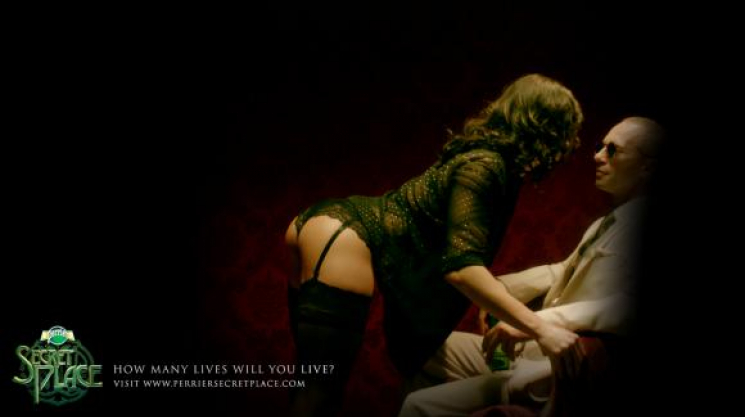 Q & A with the creators of Perrier's latest interactive video

Every so often a company does a really interesting campaign utilizing interactive technology. The people over at Perrier are masters at this. Their latest interactive campaign, Secret Place, gives the user a chance to choose your own party experience on your way to find the secret clues to unlock your chance to be part of 5 epic parties worldwide.

Q. Tell us about this latest digital initiative for Perrier?

➢ Perrier Secret Place puts you in the shoes of a guest who goes to a very very special evening party. A hidden place in an alley in Paris, behind a laundry mat. An evening where all guests will have the opportunity to live their craziest fantasies. And you'll have the best seat in the house to enjoy since all the characters that you see on the screen are clickable. With one click you find yourself in their skin. Living their fantasy.

Q. How did you come up with this idea?

➢ We started from the following insight: drinking Perrier during the evening party is the best way to take full advantage of all the opportunities available to you… and until the end of the night. In Secret Place, not only are you at the Ultimate Party living out the experience of the Ultimate Party Guest from the beginning, but you also live out the ultimate evening of 60 other guests who are in the apartment.

Q. And there is something to win, right?

➢ Yes. At the ultimate party, we’ve hidden a very special bottle of Perrier. 5 clues are hidden in the rooms of the apartment. They will lead you to the bottle where you are entered into a drawing to win an exclusive invitation to the wildest night of the world party in St Tropez, New Year in Sydney, Miami Art Basel, Carnival in Rio and the closing of the season Ibiza. Only the most experienced gamers will succeed, believe me ... Among thousands of different scenarios during the evening, only one leads to the bottle.

Q. So, it’s a game or an interactive film?

➢ Both! This project mixes Brand Entertainment and Gaming. We produced 1 hour and 20 minutes of content that allows all users to experience a unique evening scenario. We also used digital interactivity to inject this dimension of Gaming. This involves the quest of finding the bottle and the opportunity to live the lives of all guests by clicking on them.

➢ This was inspired by the emerging phenomenon of speak easy. A party venue at the rear façade that has absolutely nothing to do with the place. This is quite in line with Perrier. Completely unexpected.

Q. How are you using social networks to amplify this experience?

➢ In partnership with the agency Buzzman, we worked on a social strategy: Become a fan on Perrier Facebook and regularly you will get tips to find clues that will lead you to the secret Perrier bottle. We'll give you a little tip. Slip into the skin of the young man who looks through the keyhole and live out his fantasy. Or play a game of "Pillow Fight"

Q. How will the experience function on the mobile?

➢ We have specifically developed an application that runs on iPhone / Android / iPad. This is not a replication of the desktop experience but a concept designed for specifically for the mobile device. By downloading the application you enter the rooms of the Perrier apartment and you can navigate through each room. The challenge: find the Secret hidden bottle of Perrier in the apartment.

Q. What was the biggest challenge to pull off this experience?

➢ This is the most ambitious project to carry. We spent 18 months writing lots and lots of different scenarios. Produced a film in which we choreographed each scene so that it is connecting with one another when the user clicks on the characters. Sound design work has also been a real challenge. Imagine having to reproduce the sound of a bottle on a bar as many times as there are people in the room who can hear it.

Q. Where will Secret Place be launched?

➢ The experience will be available worldwide but open to 20 countries to play in the major markets for Perrier France, United States and Canada. This is the first time that Perrier launches a project of this magnitude in the United States. The challenge is enormous. Positioning is also a little different there. Much more premium. We really hope that the French touch--its audacious content-- is embraced well there.

Q. What results do you expect?

➢ There is a counter on the site that counts the number of lives that all users worldwide will live on the site. 1 life = 1 click on a character. I want to hear from Perrier that this idea made 10 million lives by the end of week five of the experience’ launch.

Q. How is this truly innovative?

➢ We believe Secret Place is truly a digital first. Not because it’s the first time you can click on something and enter into his point of view. But, the ambition was really to say: Imagine you enter in any movie theater, have the quality screenwriting and the direction of cinema but also to have permanent control over the course of the story.

Q. What kind of partner did you work with to make this type of project?

➢ Fighting Fish is our production partner based in Paris. This is the first time that we’ve made a digital experience for Perrier conducted by the French. This is an opportunity to remind the world that France is in a good position on Digital Excellence. Beyond the fact that Fighting Fish is based in Paris, it was able to fulfill the requirements demanded by this project. The team assembled to deliver this feature was made up of an interactive-hybrid. On the team was Lawrence King, the director of the experience and who is currently working on his own film. Arnaud XXX is the production designer and there were the script writers. Franck Marchal oversaw the sound design – having conducted several reputable orchestras before working with us. Fighting Fish puts digital at the heart of its "production thinking" and Ogilvy Paris thinks the same way. This allows a real synergy between the film's producers and those who are thinking through its interactivity.

Q. Why is Secret Place the right creative approach for Perrier now?

➢ Digital and social are playing an increasing role in Perrier's Communications strategy. They have an important, specific role: communicating the edgier, younger, hottest facet of the brand. Reaffirming that Perrier is a must have brand and product when it comes to partying and socialising. And proving, again and again, that the brand loooooves creativity, surprise and inventiveness. This is what Secret Place brilliantly does in my mind. – Benoit de Fleurian, Managing Director | Ogilvy&Mather Advertising. The digital space has opened up a new opportunity for brands. It's solved a contradiction that exists in the real world. Physically, you can't make an exclusive experience accessible to everybody. But with Secret Place, that's exactly what we've achieved. We give people the opportunity to live an experience they wouldn't normally live, but have always dreamed about. Like those exclusive parties you've always longed to be invited to. And thanks to Perrier, you can live it not once, but multiple times, through the eyes of multiple characters. This is an idea that is only possible thanks to the technology we have at our disposal today, and a bit of creative thinking. - Chris Garbutt, Chief Creative Officer | Ogilvy&Mather Paris, Group

Q. The Director is who? And why did you choose this director?

➢ Laurent King. We chose him because of his ability to manage this kind of project: half movie, half digital and interactive experience. It's really important to have this kind of new director that knows how to direct with all the constraints that a digital experience impose.

Q. Where did you shoot and tell me one challenge with organizing the shoot or a challenge that arrived at the shoot? How did you overcome the challenge?

➢ We filmed in an amazing apartment in Paris that was almost a piece of art by itself. We loved the parisian kind of architecture of it, with lovely rooms, very different to each other. It's very rare to find a place with different moods and atmosphere in it. Moreover, we were looking for a place where you can imagine secret parties happening in it. The biggest challenge was to choreograph all the action of the 60 guests. It was a real challenge because every character had a link to each other in terms of scenario.

Q. Is there a music track?

➢ The track of the experience is played live by the group called "TOYZ".

Check out the interactive video here for your chance to win.