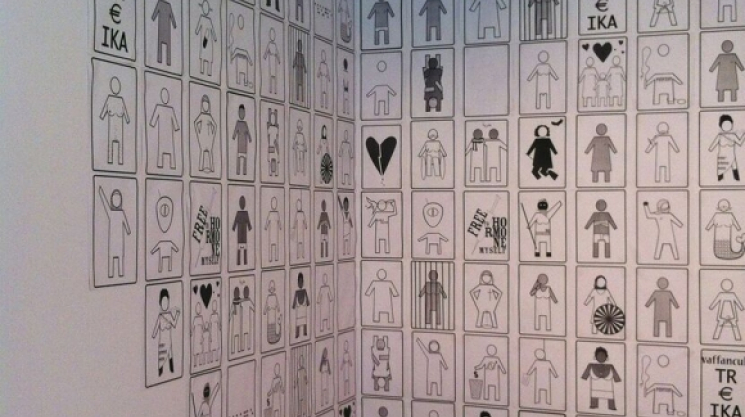 “Researching and considering what people are making and what’s going on out in the world and putting together a thoughtful argument that tells a story, gives a certain point of view or suggests something by bringing together artists and works.” That’s Syrus Marcus Ware’s definition of curating. As a visual artist and community activist, the Torontonian was definitely interested in being an artist and went to school to study art history, grow his own practice and incorporate activism through his creative process. Art curating, though, was not a career he intended to pursue; he just so happened to be cut out for the job. “The first time I did art curating, it was scary and terrifying — as anything new thing is — but I’ve come to see that it’s another part of my artistic process, another part of my creative life,” says the Program Coordinator at the Art Gallery of Ontario Youth Program. His very first experience as a curator was for the Art for Real Change, a large-scale, citywide festival about politics. At a time when contemporary art projects for social justice weren’t happening, this opportunity was an “unexpected, exciting, kind of relationship-building moment.” The arts have played a role in the political discourse over time as artists from around the world have attempted to bring to the limelight matters they believe to be urgent or pressing to their fellow humans. In that sense, Ware firmly believes arts are a great way to tell a story and engage with the community.
When questioned about the differences between artists and curators, the holder of many degrees and a Masters in Sociology and Equity Studies at the University of Toronto says there are actually similarities between both, as they are both running a project. The way they differ, he says, is that many artists are very engaged with the community around them and have a larger firsthand dialogue with other people. Nonetheless, a good curator must have a tremendous feel of what’s happening in the industry, do research on a daily basis and be able to introduce people and work to artists in hopes of inspiring them. “I think there are two halves to a whole,” says Ware. “As an artist, I really rely on them [curators] and love that kind of connection I’ve had with those I have been able to work with, who supported the work I’ve done and given me a space to tell a story. On the other hand, I love being able to tell a story from a curator’s perspective, bringing together artists that have something interesting to say.”
Traditionally, arts are the go-to way to tell stories and engage with the community even though artists and curators around the globe may not share the same methods. Their goal remains common: address the issues at hand with their community, which boils down the process of curating to four points: the early exploratory phase of thinking about subjects, working with the artists, finding a way to combine them, and telling a story. Having always been concerned about politics and activism, Ware’s approach is “to be coming from a social distressed framework that is in relationship with the chosen subject matter but also in how I try to work with the artists.” It’s important for the curator to think of all the layers of identity in his community that need to be reflected in museums and galleries. And while this is great because it brings awareness to real and actual social issues, it also fits into the broader definition of art curating in 2015, adding to the tasks curators originally had. Ten years into his curating career, Syrus Marcus Ware is still getting plenty of enjoyment from it, and clearly knows what he’s doing and what he wishes to bring to people’s sight in terms of not only art, but also political discourse.