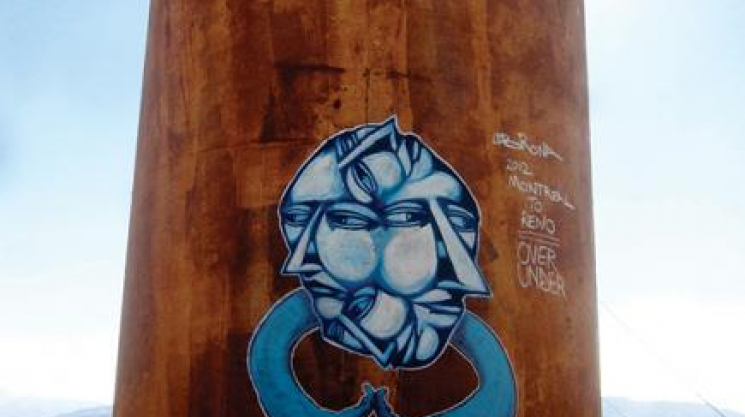 TEACHING WALLS TO SPEAK THE ART OF EVOKE & LABRONA

Over the past decade, artists have been reclaiming their cities, redecorating their urban environments and redefining the very notion of contemporary art. On abandoned warehouses and derelict buildings, train tracks and highways throughout the world, through the cracks of graffiti sprayed walls, street art has emerged as a global movement, as artists move beyond the letter towards the image. On the fringes of society, across the vast space of the second largest country in the world, Canada has given birth to some of the most versatile and talented artists working in the street today.

Evoke and Labrona are two such artists who defy categorization, equally happy making work on the street, or in the studio. Their unique style and vision has had a profound impact on the last 10 years of street art in Canada. Both artists enjoyed their formative years in Ottawa, home to some of the most respected street artists in Canada. It was here that both artists were first introduced to urban art, through their passion for skating around the city.

Evoke explains, “I mentioned to my sister there’s this crazy guy who pastes mechanical, surreal fish around the city when I was 11 years old. It turned out he lived three seconds away next door. He brought me into the fold really quickly, and introduced me to tons of people.”

For Labrona, it was his good friend, Other, one of Canada’s most prolific and brilliant street artists, who planted the seed in his head. “When he got into tagging in the mid eighties, I tried that for a bit but it didn’t really speak to me. Later on when I saw him doing more figurative stuff, I got more interested. I remember him telling me someone in Texas saw one of my pieces and it blew me away. You paint something in Montreal and someone sees it 3,000 miles away. So I slowly started getting hooked.”

Working outside is not a choice for either artist, it’s a necessity. Street art, by its very nature, is a transient form based upon impermanence, a quality which makes it all the more immediate. Evoke explains, “When you come across something on the street it’s like a raw nerve. The fact that it might be gone in 10 minutes makes you want to suck it all up. You just open your eyeballs and open your heart and enjoy it. Keeping things in a perfect state in a gallery is okay, but things that exist in the real world show the truth of life. It says so much doing it outdoors, the whole environment changes. Everyone can be an urban landscaper this way, it becomes human again, and so the authorities lose power.”

Labrona, who has painted on over 2,000 trains with Markalls (oil paint crayons), believes the transient nature of street art teaches you to let go of things. "I like to think of my work on trains wandering around North America, having adventures until they get painted over or fade away completely.” According to him most of the people writing on trains were actually railroad workers bored on the job. "I don’t explore it in my work, but I am aware of, and greatly appreciate the culture. I like to think of people in other places bumping into my work on trains and being inspired to do something creative.”

Traveling and painting around Canada and the world has allowed each artist to really explore the diversity of life across the rest of the globe. Evoke, now based in Toronto, has hopped on freight trains across Canada from coast to coast nine times, not to mention traveling to 34 countries in total. His work has also led him up to the Northern Territories in the Arctic, where he worked with Inuit communities. “All of a sudden you start thinking, why are people so rich culturally, and in some ways in such a dire situation? I haven’t spent years in the North but I know it’s a beautiful culture which doesn’t separate art from life. Because people were nomads, every tool needed to be strong, have multiple purposes, and be beautiful—because beauty is functionality. I didn’t know this was how my brain was wired. My work was already aiming to create multi-images within one image, and I go to the North and I see this. And when you see the state people are in up there, and you know the pressures from the rest of the world for minerals and fish, you think ‘damn what a scam this government has pulled on them’. This, to me, is one of the greatest driving forces that I’ve felt in my life.”

For Evoke, the Arctic project was about "saying, look young kids, you don’t have to abandon your culture completely for 50 Cent and G Unit, there’s so much of what is yours that’s amazing. That’s all I can really do. I don’t want to bring poisonous spray paint into the Arctic.” Always conscious of the impact his work is having on the planet, Evoke’s next project will feature video projection and natural paints on a 40 foot ice floe in the Arctic!

For Labrona, it’s Montreal, which is now "experiencing a real creative boom. There’s so much stuff going on, and people getting together to make things happen. It’s great to be part of all this action and finally get some exposure at home.” However, Labrona is keen to make a distinction between illegal and legal work. “I think public murals are a way for cities to try and control the illegal aspect of the graffiti and street art movements. For instance if there is a nice mural on a building, it might not get tagged as much and makes the neighborhood look better. That being said, I love painting murals and I am glad for any opportunity to paint. I also love the illegal aspect of street art, the freedom of it. I am trying to add beautiful and thoughtful works to the visual landscape in any way I can.”

Street art, above all, is characterized by its generosity of spirit. It asks for nothing in return, free for anyone to enjoy, and free for any artist to express themselves. Evoke and Labrona’s work turns walls into canvases which seek to free our imagination rather than contain it. Their art gives us the opportunity to spontaneously encounter thought provoking images which brighten and beautify the dull urban environments of our cities. Streets, buildings and trains are now the true contemporary galleries of our society, where the walls don’t just speak, they swear.

You can see Evoke working live at the Alliance Francais of Toronto & the Labaratoire d’Artes, until May 1st