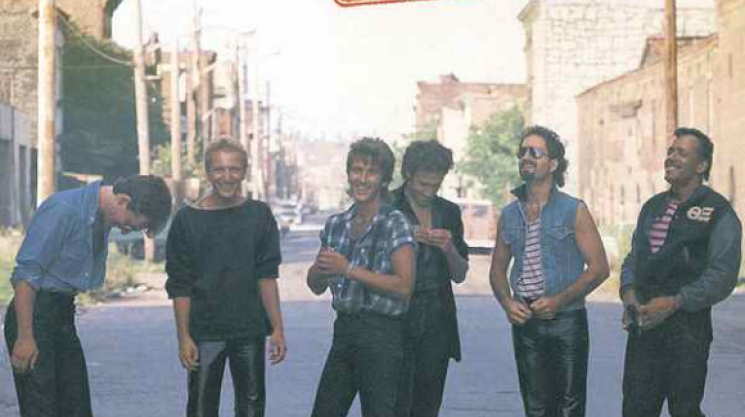 There’s no avoiding trouble when your biggest claim to fame is providing the music for a fake band from a terrible movie about the dangers of boarding the rock and roller coaster. For John Cafferty, decorated leader of the Beaver Brown Band (whatever the hell that means), scoring the hit soundtrack to the film Eddie and the Cruisers offered a chance to take his struggling rock upstarts from the mean streets of Rhode Island all the way to the Big Time, USA. However, following up on the smash success of Eddie and the Cruisers proved difficult, particularly since Cafferty’s music generously “borrowed” such obvious inspiration from Bruce Springsteen, to the point that even the dumbest of music critics regularly trashed him and his crew of E Street rejects. “Voice of America’s Sons”, taken from 1985’s Tough All Over, is a textbook example of formulaic heartland rock, the kind of tune the Boss could probably write in his sleep. Serving a double dose of shallow social commentary on the topics of youthful alienation and rampant deindustrialization, “Voice of America’s Sons” creates the character of Little Johnny as the living embodiment of this national crisis. As the track opens, Cafferty cautions Little Johnny that he “better wake up real soon,” or else risk losing what’s left of the American Dream. With shuttered factories and crime in the streets, how can Little Johnny survive? Maybe that punk should consider joining the army and serving his country in its time of need (and cut that hair while you’re at it). Drawing a parallel between aggression abroad and instability at home, Cafferty notes “they’re fighting in the jungles and they’re fighting in the streets,” emphasizing the Cold War era’s high stakes by adding that “they’re playing those games, man, they’re playing for keeps.” That’s some deep shit. It’s lazy, derelict songwriting that couldn’t even pass for the voice of Soviet Russia’s sons, let alone America’s. Is it any wonder this guy got buried for being a low rent Springsteen?

Despite these glaring faults, “Voice of America’s Sons” enjoyed a brief second life as part of the soundtrack to Sylvester Stallone’s 1986 cult classic Cobra, which chronicles a hard-hitting cop who sees crime as a disease – and himself as the cure. When viewed in the light of Cobra the song takes on a whole new meaning. Given the film’s fondness for racial profiling and trashing the liberal media, not to mention its myriad hot takes on the alleged softness of the criminal justice system, suddenly Little Johnny’s true colours are revealed. He starts to look like just another disenfranchised, racist white dude with an axe to grind against the loss of his supposed birthright. I’m surprised “Voice of America’s Sons” hasn’t been adopted by Trump Nation as its xenophobic anthem of choice (but who’s gonna pay for it?). And it’s not like John Cafferty and co. did anything to counter this interpretation of their work. Hell, they even shot a video of the Beaver Brown Band rocking a rooftop with footage from Cobra projected behind them. Featuring enough fist pumps and headbands for the entire family, the video for “Voice of America’s Sons” presents the full Beaver Brown Band as E Street Band/outlet mall experience, right down to the inclusion of black saxophonist Michael “Tunes” Antunes as foil to the late Clarence Clemons, aka the Big Man. Imitation’s the highest form of flattery, right? In any case, Cafferty’s skilled mimicry could only buy him so much success. No Beaver Brown Band album charted after Tough All Over (I guess he really nailed it with that title), and in the wake of this disappointment Cafferty went back to what he did best: scoring the music for one of the silver screen’s hottest bogus acts, releasing the soundtrack to the similarly wretched Eddie and the Cruisers II: Eddie Lives! in 1989. I guess the music industry really was playing for keeps, after all. Oh, well. Hey, John, can you play “Born to Run”? That’s a good boy.