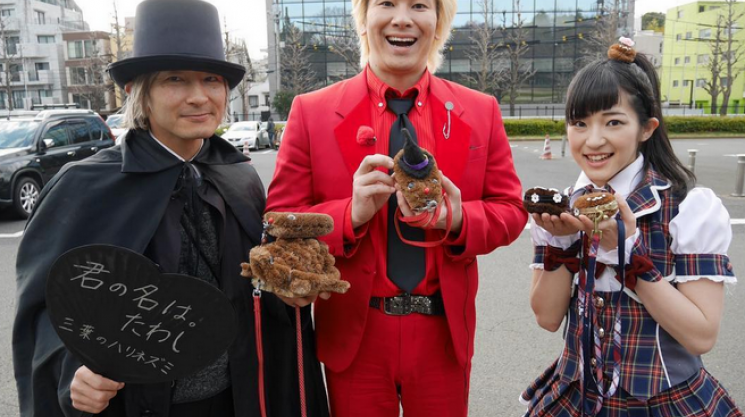 Why Walking Inanimate Objects On a Leash Is Trending in Tokyo

Of all the imagery I’ve encountered on adventures down the Instagram rabbithole, none has captured my imagination so much as the sight of some guy boarding the Tokyo subway with what appears to be a guinea pig on a leash... wearing a wizard’s pointed hat. My mind reeled with questions about the fuzzy brown creature’s origins and how its owner had managed to leash-train it. Was I to believe that this critter wasn’t at risk of stiletto impalement or being carelessly knocked onto the tracks by frenzied rush hour commuters in the labyrinthine public transit system of Japan’s capital? What the hell kind of rodent would submit to the pageantry of costume headgear in the first place? Mind reeling, I reposted the picture and waited for a sign.

Prompt confirmation arrived from a friend in Japan that she’d attended university with this gentleman and his bristly fellow-traveler. I emailed her a laundry list of questions about this unspecified quadruped on a lead and put her on the case. Never once did my line of questioning refer to the pint size beast as anything other than “your pet,” reasoning that all would be revealed in the owner’s responses. Little did I know.

Tawashi Ojisanan does not own a rodent. The item he takes everywhere on a leash is a popular Japanese scrubbing brush called a Tawashi. Gather round and hear the tale of what is arguably Japan’s strangest emerging trend: grown-ass men and women taking inanimate cleaning implements out for a walk like pets.

Under the blazing summer sun of 2006 in Tokyo, Tawashi Ojisan and his friends had packed into a car and sat waiting at a red light when he noticed a man in a black suit leading a spherical object along the sidewalk on the end of a string.

“I knew immediately that there was something wrong with this guy,” he recalls. “When the traffic light turned green and we began to drive away, I couldn’t tear my eyes away from his pet. It was a breathtaking sight. On the end of the stranger’s leash was a head of Chinese cabbage, fastened to an ordinary piece of string so that he could drag it wherever he went. I was shocked and mystified over who the hell this guy was, and what he was doing walking a cabbage on a leash.”

The solitary cabbage walker’s image haunted Tawashi Ojisan, much to his friends’ bewilderment. This was Japan, after all, where urban counterculture is often met with a tolerant shrug, or sometimes fanatical encouragement. But Tawashi Ojisan couldn’t shake the sense that he’d found his calling. “I simply had to hunt down this character. I started posting inquiries on Mixi [an online Japanese social media platform popular at the time],” he confesses.

There was no shortage of eyewitness accounts of the mystery man glimpsed with his leafy invertebrate, and an online community in the hundreds came forward to share their sightings of this local treasure. The cabbage guy appeared to frequent Tokyo’s Ikebukuro and Shinjuku neighborhoods. “I can proudly say I’m the only person who ever saw the cabbage guy in the satellite city where I grew up, Shin-Tokorozawa,” boasts Tawashi Ojisan. “I have a feeling that’s where his headquarters must have been.”

Tawashi Ojisan started asking around in Tokorozawa in hopes of tracking down the the cabbage guy for at tête-à-tête. Reactions among elder taxi drivers, vegetable store clerks and kiosk workers erred on the side of disapproval. He remembers, “They stared at me flatly, like, ‘what are you even talking about?’ At some point, I realized that the only way to prove that I wasn’t making up stories was to show them myself that this was a thing. I had to be strategic. My biggest concern about trying to drag a vegetable around on a leash was that a head of cabbage is pretty brittle and trails a skidmark behind it wherever it goes. I struggled with finding the right vegetable to keep as a pet, and soon settled on a nice ear of corn I saw at the supermarket, that made for relatively frictionless leash walking.”

Tawashi Ojisan chose bustling Takeshita Street in Harajuku, Tokyo to come out of the pet corn closet. “I had to go ahead with it to find out just how it would change my life,” he reflects. Upon his return to comparatively provincial Tokorozawa, a renewed sense of confidence bolstered regular outings with his corn on a leash. “At first, it still functioned as kind of survey,” he clarifies. “I’d go up to people with Tomoko-Chan (roughly translated, “Lil’Corn Buddy) to say, ‘Excuse me, this corn is legitimately my pet, and I’m on the lookout for a guy who walks his cabbage around town on a leash. Any chance you’ve seen him?”

Sadly, Tawashi Ojisan never saw the cabbage guy again. “Lore holds that the cabbage guy is actually a Westerner,” he muses, “and some believe that an entire cabbage walking society exists here in Japan because of him. Others dismiss this claim as a frivolous rumor.”

Either way the intensity of Tawashi Ojisan’s relationship with his series of corn pets began to wane as summer romances are wont to do. Once the honeymoon phase between man and large grain plant cooled, he found himself troubled by the short shelf life of his pets and felt a twinge of guilt about endorsing food waste on a regular basis. Calling it quits with Tomoko-Chan didn’t come easy and he still lingers in the corn aisle long enough to catch those old-timey feels. “To be honest, every summer when I see corn piled up at supermarket, I still get butterflies in my stomach,” the 44 year old admits. “I refined my search by working my way up from leash walking an ear of corn to green onion, the white radish, broccoli, a carrot, yams and for good measure, a beach sandal. But then, I found a Tawashi scrubbing brush at the store which proved to be the perfect fit. Plus, it’s caught on like wildfire- my Tawashi and I get mobbed at events, and often hear the click of digital camera shutters behind us when people are too shy to approach and ask for a picture. I’d like to think that it’s even put my beloved hometown on the map.”

Tokyo’s Asakusa district boasts a specialty Tawashi store and Tawashi Ojisan will be first to tell you that the 102nd anniversary of this well-loved scrubbing brush’s official patenting date fell two days behind America’s Independence Day last year. Naturally, he plans to take a day off to attend the annual Tawashi festival, where he’ll be in good company.

"There’s actually another guy I met one Halloween who dresses his Tawashi brush in a Dracula cape,” he effuses. “Believe it or not, Japan has a lot of cape fetishists. Some folks just can’t get enough of that velvety cloak texture. Anyway, @BloodCape saw me and my Tawashi from a distance and I guess we vibed so he introduced himself. He was wearing this cape worth hundreds of dollars. He got into Tawashis and we ended up going to all sorts of events together. We look really striking when we hang out with our pets because our body types are totally different. He’s a lot bigger than I am. There’s also a female idol here in Japan, Miyano Neri, who recently who got into Tawashi walking. It’s definitely trending in some circles. Of course, plenty of these folks are just poseurs trying to catch up with the latest scene, but who can blame them?”

On the days when Tawashi Ojisan takes his brush out sans costume, passers-by often assume that he’s accidentally dropped the object and is dragging it unawares. “When I break it down that Tawashi is a pet, some of these good samaritans crack up,” he giggles. “Some think it’s art while others are struck speechless. Plenty are convinced that I’m recovering from a dark past full of trauma. I sort of like the response of shock, to be honest. It’s just par for the course that these assumptions will be made. My parents gave up on bothering me about it a long time ago.”

Unsurprisingly, young folks seem to be the least judgemental of Tawashi Ojisan’s atypical companionship, but he’s encountered a good degree of Tawashi-shaming and pranks. “One time,” he thinks back, “I let a few drunk guys walk my Tawashi and then without a word, they made off with it. As far as I’m concerned, it was a total crime, but I found it in my heart to forgive them. Also one time, I made the mistake of going to the bathroom in a train station and tethered my Tawashi to a handrail outside. When I came back out, my pet was gone. I had no idea who the culprit was, but later found out on twitter that some college students had made off with my Tawashi just to mock me. I did not report this trickery to the police.”

Beyond taunts and petnappings, the perils of dragging a scrub brush around on a leash are myriad. “Sometimes Tawashi will stumble when it gets dragged the wrong way or seems to be in a bad mood, just lying there on the ground staring into the void,” Tawashi Ojisan puzzles. “Now and then, people step on my Tawashi accidentally but I’ve gotten skilled at keeping him out from underfoot. One time, he was speared on a high heeled shoe and lost his eyeball. I fret about the leash getting tangled between people’s legs so I try to hold the Tawashi up whenever I board a super crowded train. That said, Tawashi are physically resilient and can stand a little stomping, but I don’t generally broadcast that fact because I’d hate for people to start stepping on my pet for laughs.”

At the end of a long day on the go, Tawashi Ojisan typically comes home and places his pet, which he considers to be of “changeable gender” in the back entrance of his apartment. “I don’t really think it’s necessary to keep a living animal,” he points out. “My Tawashi breaks down the idea of the pet-owner dynamic. People get stuck in their lives because they become absorbed by some idea of how things should be. When those people see something that exists completely outside of the norm, it shatters the foundations of common sense and creates fertile ground for new possibilities and solutions. Beyond this, it doesn’t come with all the negative side-effects of animal ownership, or what I would describe as “pet-loss.” Animals’ nutritional and medical needs burn up money and they can’t be neglected or they’ll die.  Sure, I’ve carelessly lost my Tawashi but unlike with an animal, I can just say, ‘Good luck, pal, you’ll be missed,’ and replace it. Besides, think of how much dirt my pet drags out of the public sphere. The only catch is that the more you walk them around town, the more worn down they become. The passage of time for a Tawashi is different for that of humans. Honestly, I just want folks to get a little joy out of seeing my Tawashi on a leash, especially when they’re stressed out or exhausted. Maybe it’ll ease their angst and make them laugh. For me, Tawashi is like my brother, my child and girlfriend all in one. I know that’ll be misunderstood, but whatever. Tawashi is my beloved buddy."