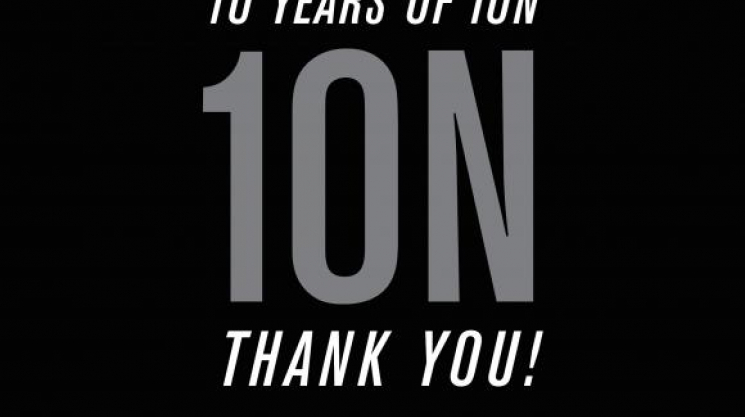 WOW! Ten years of being in print! It seems like only yesterday that the first issue of ION Magazine hit the streets. We have come a long way since that issue, and we wanted to share some of our favourite “highlights” and “low points” with you. Sure, we can laugh about them now, but at the time, some of these things seemed catastrophic. It hasn’t been all rainbows and unicorns, but with every passing year we have learnt a lot about the magazine business, and ourselves. So kick your feet up, and join us on this little journey through the history of ION.

2003
IN BRIEF: ION Magazine is born, and, with all things new, there are some serious growing pains. There are in-staff fights, a lack of direction, and lack of funds. We are a local Vancouver magazine, with big dreams and grand plans of going national some day.

THE GOOD: We have interviews with Vanilla Ice, Buck 65, Donny Miller, Hot Hot Heat, The Stills, and Stereo Lab. We make it to our one year anniversary issue!

THE UGLY: We print an article about prostitution. Not a good idea. Ever.

2004
IN BRIEF: We have a complete change to our staff roster at the beginning of this year, as well as the first of many new logos. Michael Mann comes on as Editor in Chief, Jason Sulyma as Music Editor, and Fiona Garden as Photo Editor. We are the first magazine outside of Montreal to interview Arcade Fire, the first publication to interview YSP! WSD!, and “The Perry Bible Fellowship” comics starts running in the magazine.

THE BAD: A writer is taken on an all-expense trip to meet Franz Ferdinand, gets really drunk, and misses the interview.

THE UGLY: While doing a photo shoot, we get stuck in lockdown for an hour in a room with four prisoners at a maximum security prison. The upside: we learn how to fake our deaths if we ever get shanked in a prison shower. Bonus!

2005
IN BRIEF: We welcome Toby Marie Bannister as our Art Director, and Bryce Dunn comes on as the new Music Editor.We also receive our very first, and only, collaged “hate mail”. Awww!

THE GOOD: Karen O is on the cover of issue 20.We start getting better interviews: Fischerspooner, Feist, Weezer, Wolf Parade, Chad VanGaalen, and Deerhoof.

THE BAD: We receive our first threat of a lawsuit from an inebriated musician that is screaming the threat at us from outside our locked office…while we are on the phone to her lawyer. The threat stems from a comment in an article talking about this musician’s love of partying. The lawyer drops the lawsuit after hearing his client in the background.

THE UGLY: The holiday issue cover. Which is a photo of a dog standing in front of a Christmas tree.

2006
IN BRIEF: Danny Fazio comes on as Creative Director and takes the design in a more consistent direction, Toyo Tsuchiya comes on as Fashion Editor, and Natasha Neale moves out of her three year, unpaid internship, into the office manager position. We start to focus only on art, fashion, music, and culture as the content subjects. ION Magazine receives its first award for the fashion editorial “Dead Ringer”. We start the “ION Hip Guide”, a shopping guide for the Vancouver market.

THE GOOD: We have interviews with Junior Boys, Leonard Cohen, The Presets, Lily Allen, Guillermo Del Toro, Of Montreal, David Pirrie, and Fake Shark! Real Zombie!. Kevvy from FSRZ also appears on the cover of the four year anniversary issue the following year.

THE BAD: We print the wrong month on the cover and have to print tiny stickers to place over the mistake. By hand.

THE UGLY: We give ourselves only three weeks from conception, to completion, for the “Hip Guide”.

2007
IN BRIEF: Trevor Risk comes on as Music Editor, and we change the logo placement on the cover. ION wins its second award for the fashion editorial, “Flight Club”. This is also the year that we kick up our game and bring Lady Tron in to DJ our four year anniversary party.

THE BAD: We have interviews over bad phone connections, with language barriers, and malfunctioning recorders.

THE UGLY: We put an underage girl holding a hand gun on the cover of our back to school issue, realize this is not the best idea, and then have to reprint the cover before it makes it to the bindery. Yes, a couple of hundred copies make it to the bindery, and we have a box of this ill-fated cover to prove it.

2008
IN BRIEF: ION turns five, and we are still in print. Enough said.

THE GOOD: We have interviews with The Ting Tings, Cut Copy, Faile, Gonzales, Sébastien Tellier, The Other, We Are Scientist, Tough Alliance, and Bruce McDonald.

THE BAD: Our rent doubles, and we need to move the office in the worst snowstorm Vancouver has seen in 10 years.

THE UGLY: We throw a farewell NYE party for 200 people in the empty office, and it’s bring your own booze. Trust me, it gets ugly.

2009
IN BRIEF: We do a complete redesign of the magazine, logo, cover direction, and add a proper website. We are the first magazine in North America to add an interactive texting component to the magazine, before QR codes. We launch our collaborative T-shirt line, Limited Edit[ION], featuring work by Raif Adelberg, Michael Deforge, and Robert Mearns, to name a few. We launch Compass[ION], our charitable initiative, where we outfit kids at Covenant House in new clothing donated by distributors and reps from across Canada for Christmas.

THE GOOD: Getting Fever Ray to agree to do the ION cover: the only cover in North America that she agrees to be shot for. Also on the covers: Jeremy Shaw, Lykke Li, A-Trak, Patrick Wolf, Lissy Trullie and Band Of Skulls.

THE BAD: Unfortunately most people don’t understand how the texting component of the magazine works, and it is phased out by the end of the year.

THE UGLY: The economy takes a nosedive and magazines are folding one after the other. “Print is dead” is the newest media catch phrase.

2010
IN BRIEF: The Olympics are in Vancouver and ION Magazine opens its first pop-up shop. It is in the heart of “Skid Row” and we sell art, T-shirts and have the occasional band come by to play. We decide to stop doing the “Hip Guide” in Vancouver, but do one last one for the Juno’s in St. John’s, Newfoundland. We do our first collaboration with Little Burgundy, and produce “Bobby” magazine with a bunch of five year olds, as part of a kindergarten educational program.

THE GOOD: We have two cover firsts: Die Antwoord and S∆lem. Also on the covers: She and Him, Diplo, Eugene Hutz, Chromeo, and Das Racist.

THE BAD: We get a call from Die Antwoord’s management saying that Ninja will not shoot the cover unless we bring him XXL boxer shorts with either a maple leaf or a Canadian flag on it…half an hour before the photo shoot. We also print that a musician said that he “loved cocks”, when what he actually said was he “loved cops”. Big difference.

THE UGLY: Ninja wears those boxer shorts for all of his Canadian shows.

2011
IN BRIEF: Tyler Quarles moves into the Creative Director position, and new design elements are added. We also welcome Cameron Lee as our “Web Wizard”, Douglas Haddow as Web Editor, and Rachel Zottenberg as Arts Editor. We do our second pop-up shop in Vancouver, and launch the marketing division, called Creat[ION]. The Raveonettes DJ our anniversary party, making Trevor Risk the happiest man on the planet.

THE GOOD: Our cover stars include Tim Heidecker, Black Lips, Teddybears, The Kills, and M83.

THE BAD: We decide to put two clothing designers on the cover.

THE UGLY: See above.

2012
IN BRIEF: Aleeza Khan moves from London, England, and joins the team as Editor in Chief, and Deanna Palkowski comes on as Fashion Editor. We launch a new website, app, and digital magazine. We start focusing more on content then we have in the past, and Creat[ION] becomes a stand alone company with a growing roster of clients.

THE GOOD: On the cover we have Andrew W.K., Frankie Rose, Grimes, James Mercer (The Shins), Peaches, and Diamond Rings.

THE BAD: We announce the launch of our website months before it’s ready, leaving people wondering what is different about it.

THE UGLY: The new website finally goes up five months after we initially announce it…and then it crashes.

2013
IN BRIEF: Jonathan Nodrick comes on as Creative Director, Sterling Downey joins us as Arts and Culture Editor, and Natasha Neale moves into the role of Online Content Editor. We do our first ION Magazine billboards. We celebrate 10 years of ION with the magazine you are holding in your hands, and Robert DeLong joins us for our parties in Montreal, Toronto, and Vancouver.

THE BAD: We have trouble finding a space in Vancouver that could accommodate the party. But it all works out in the end!

THE UGLY: Our faces: after throwing three parties, in three cities, over three days.

Thank you for walking down memory lane with us. We really enjoyed looking back over the last 10 years of ION, and we hope you did too. We are sure that there are going to be many more good, bad, and uglies to report in the coming years, and we can’t wait to share those with you. Until then, enjoy the rest of the magazine, and thank you for the support.