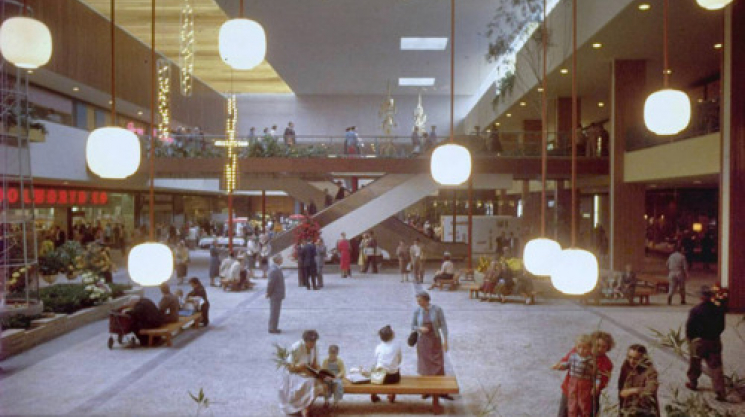 The Unfortunate Tale of Victor Gruen

The following is an exclusive extract from Ewan Morrison's new book/transmedia spectacle, Tales from the Mall, which you can purchase in a variety of formats here.

If you have ever entered a shopping mall with the intention of purchasing, say, a pair of shoes, and have left with a hairdryer, four bars of chocolate and a flight to New York, then you’ve probably been a victim of ‘The Gruen Transfer’. This is the name psychologists use to describe the process whereby consumers respond unwittingly to stimuli in the retail environment – lighting, layout, sounds, smells – all of which have been designed to create disorientation, leading you (the customer) to lose all sense of direction and purpose, opening you to irrational desires and ‘impulse buys’.

Victor Gruen (1903-1980) – who the condition was named after – did not consent to having his name borrowed or his life cast in this mould. He started out with a rather different set of goals.

Gruen was an Austrian-born architect who fled to the USA from Nazi Vienna in 1938. He famously arrived in New York with ‘only $8, an architect’s degree and no English’. Gruen disliked much of America; the suburbs, automobiles, and even shopping. He believed that a stop had to be put to the sprawl and the destruction of communities that had been unleashed by the proliferation of strip malls – strip malls being unregulated development by retailers, along freeways between towns and cities, which led to American roadsides, in the 40s, becoming dominated by cheaply built stores and huge glaring advertisements which stretched on for hundreds of miles, obscuring the landscape beyond.

Gruen was concerned by the fact that suburban Americans knew nothing of their neighbours and drove tens of miles to shop for essentials while still never encountering each other. He wanted to call a stop to this newly emerging lifestyle before it resulted in social atomisation and the dissolution of community life.

His alternative and radical ideal was the construction of a focal centre; a ‘crystallisation point for suburbia’s community life’ – a concept he likened to the ancient Greek ‘Agora’ or marketplace where goods and ideas were traded. Gruen was a committed socialist and subscribed to the utopian, modernist belief that bold new architecture could literally lay a foundation for a better society; his vision was that of constructing a social gathering space, which coupled modern commerce with a celebratory, communal ethic: it would have fountains, clocks, trees, playing and strolling areas, it would host live music, talks and public events. Such a place would be styled after the great civic parks in Washington, Boston and London, and like them it would take the name: Mall.

Gruen was vehemently opposed to any forces, political or economic, which sought to covertly manipulate the individual, but History had its fun with Victor Gruen. He went on to become the most influential commercial architect of the 20th century, and his designs became the international template for the modern mall, laying down a blueprint for the homogenous retail architecture and consumer-based city planning that followed; facilitating the spread of transnational capitalism. Against his better intentions, his designs contributed to an acceleration of the social fragmentation he spent a lifetime trying to prevent, and to the destruction of many city centres, towns, rural areas, communities, and, some would argue, entire national economies.

In later life, shocked by the ‘bastardisation’ of his ideals, Gruen returned to Vienna and lived out his last days in a country retreat, far from the modern world. In a 1978 speech, he recalled visiting one of his old malls, where he swooned in horror at ‘the ugliness... of the land-wasting seas of parking’ and the ‘soul-killing sprawl beyond.’ He died on his private estate two years later.

Next time you leave a mall with a new pair of shoes, when you only went in for a sandwich, please consider the unfortunate tale of Victor Gruen.