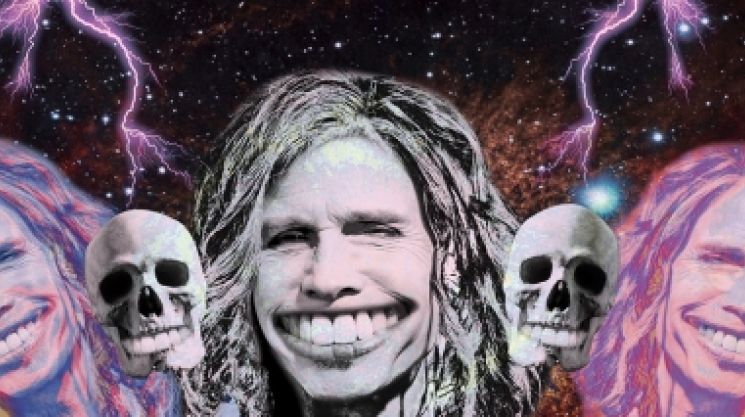 Aerosmith is an American band that has been active from the mid-1970s until present(1). The band includes Joseph Perry, a Who from Whoville dressed up as Jack Sparrow(2), and three other people no one cares about. Aerosmith released a number of hit songs in the ‘70s, ‘80s and ‘90s, and have managed to coast on the strength of those hits for this millennium so far. Walking scarf closet Steven Tyler raised his Q-score(3) recently by being a judge on America's Got Talent or American Idol or So You Think You Can Dance (America)(4).

Aerosmith burst onto the scene as teenagers in the ‘70s with, I think, “Toys In The Attic”(5). Then “Dream On” came out on some other album really early on as well, then there’s a huge blank space in my memory where the ‘80s should have been, and then they did “Walk This Way” with Run-D.M.C. In some ways, Aerosmith is responsible for the rap-rock revolution of the early-aughts and have yet to fully pay for their crimes(6). Then the ‘90s saw a huge resurgence in their popularity when a string of music videos starring Steven Tyler’s daughter and Alicia Silverstone played on a near constant loop on MTV. Aerosmith’s sexualisation of a young Liv Tyler was pretty creepy, but everyone was cool about it at the time, I guess. I mean, I get it. Seeing the poster for Empire Records at my hometown’s Video Stop was a pretty formative experience in my young mind. But I’m also not Liv Tyler’s dad.

In addition to the music videos for “Crazy” and “Amazing” and “Crying,”(7) Aerosmith were heavily featured in a number of major motion pictures. Most famously, there was “Armageddon,” which featured a song about animal crackers and asteroids(8). For my money, though, Aerosmith were never better than their Wayne’s World 2 appearance. Wayne Campbell built it, and Aerosmith came. Aerosmith were the featured performers at Waynestock, which really saved Wayne’s ass and, indirectly, saved his and Cassandra’s relationship. Aerosmith are also indirectly responsible for the greatest act of teenage rebellion—when a disgruntled Randall “Pink” Floyd tells his football coach that his high priority for the summer of 1976 was to procure Aerosmith tickets(9).

My first exposure to Aerosmith wasn’t through film or racy music videos, but through the earnest art form of parody. There were a number of bands that I became aware of through Weird Al parodying them first, then finding the originals. Weird Al’s song “Livin’ in the Fridge” from his album Alapalooza is, I’m 99% sure, a parody of an Aerosmith song. If it’s not, my sincerest apologies. My next encounter came from snooping around my older brother’s room and finding an album with a picture of a cow’s udder on it called “Get a Grip,” which, let’s be real: gross.

To sum up, I’m sure Aerosmith did some worthwhile things as a band(10). I didn’t even mention the sheer amount of drugs done by the founding members. It was a lot of drugs. Apocryphally(11), Tyler would hide drugs in his scarves on stage, and I guess just do drugs on stage in front of everybody? I don’t know. Maybe he just liked having drugs on stage. Maybe he would sing “Don’t Wanna Miss a Thing” to his cocaine about not wanting to miss any cocaine.

1. Steven Tyler, beyond all odds, is still alive at the time of writing this article.
2. Mark Little, via a tweet, January 26, 2014.
3. Still a thing?
4. Not to be confused with “So You Think You Can  Dance Canada.”
5. Don’t correct me if I’m wrong. I don’t care. That’s also the point of this feature.
6. Steven Tyler’s surgeon is exacting revenge extremely slowly over the last two or three decades.
7. This song may have been titled “Cryin’” because why not.
8. Literally the only two things I know about “Armageddon.”
9. Livin’, man. Ell eye vee eye enn.
10. If nothing else, when “Sweet Emotion” plays at the start of “Dazed and Confused," it might just be the greatest cinematic moment in history.
11. There’s no way I’m using that word correctly.