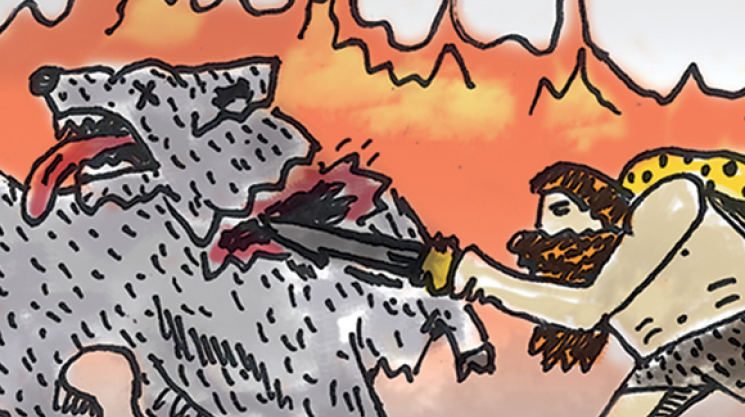 Ragnarok is the apocalypse according to Norse Mythology. As you may have read in traffic-driving internet articles, it was supposed to happen recently. As someone whose knowledge of Nordic stuff ranks between ‘former classical musician,’ and ‘white supremacist,’ I can officially tell you: it did not.

To understand Ragnarok, you need to know that Germanic cosmology states the following: before the world existed there was a darkness solely populated by elves(1). From this darkness, Odin created the nine realms, the most important being Asgard (home of the gods), Midgard (Earth), and—following Germanic naming logic—one called Untergard(2). Because Odin isn’t some waterpark-building eighties millionaire, he admitted nothing lasts and warned a final battle called Ragnarok would come, returning existence to the void.

Ragnarok begins with a Canadian-friendly three years of winter(3). I think this is due to a collision of all nine realms(4), because otherwise the ice giants would get really jealous. From here, I rely on my knowledge of Wagner’s 15-hour Ring Cycle opera, which is hazy at best(5).

The apocalypse itself involves a battle between every cool thing from a fantasy book or death metal song. All the Gods get in on the action too, from Odin himself to—don’t worry ladies—the trickster Loki(6). During the skirmish, everyone not getting eaten by giant nightmare wolves is obsessed with finding a ring(7) that can either halt Ragnarok, or just blow everything up and end it...I forget.

The finale of Ragnarok comes with the best damn word in any language: Götterdämmerung(8). All the gods are slain, by either a ring-wearing invincible badass, or a level-90 fire wraith, and the realms are destroyed. As literal inspiration for ‘it’s not over until the fat lady sings’ the last to go are Odin’s invincible Valkyries who lament the loss of everything. So during Ragnarok, just like at family dinners, you're gonna want to get behind the fattest lady and hope she's got your back.

When Ragnarok is over, there is nothing. The Vikings were fucked up people who LOVED to die, so this is way worse than any Left Behind Christian bullshit. The upside is you won’t go to Viking Hell: the frothing moat of knife-filled piss surrounding Valhalla. The downside: you’ll never get a beer in Valhalla. But, you had to die a warrior to get there and not, say, of a bowel obstruction when you’re 98, so how good were your chances really?

1. See: Thor: The Dark World. You’d think Hemsworth would let himself go but nah, bro’s still shredded as all heck!
2. Underground?
3. Cool originality, Game of Thrones.
4. See also: Thor. No seriously. Thor is so stacked he's basically a chick so it's fine to be admirin’.
5. Who am I, Hitler?
6. Hiddleston’s pretty lean but I get it: eyes like woah!
7. Hey J.R.R. Tolkien, I got a Christian parable for ya: Thou shalt not steal!
8. It means ‘Twilight of the Gods.’ I’m ignorant, not stupid.