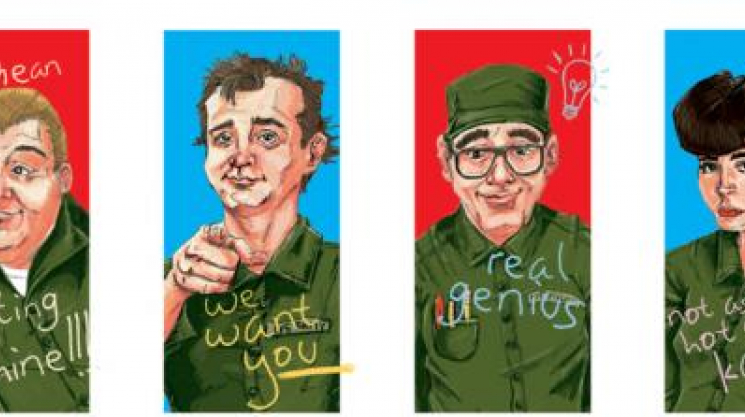 The Encyclopedia Hearsay was founded on four principles: misinformation, rumours, half-remembered conversations and outright lies. Anyone can contribute so long as articles are written with no research whatsoever. If you are citing The Land Before Time as a source or abusing footnotes like David Foster Wallace, you are on the right track.

Stripes is a movie from 1980-something. It stars Bill Murray as a wisecracking slacker (1). He plays John (2), a lovable loser who has run out of options. Naturally, he joins the army. This movie was made before the end of the Cold War, so I guess lovable losers may have actually been joining the army. Anyway, the movie is the template for the ragtag-team-of-misfits-gets-the-last-laugh movies. At least I assume it is (3).

Bill Murray’s character joins the army and is put in a division (4) with a bunch of slackers, like John Candy and Harold Ramis (5). There’s a drill sergeant who obviously hates this group but they keep finding ways to come out ahead during drills and stuff. The sergeant takes this as a big personal “f*ck you” and keeps picking on them. Bill Murray manages to get his group out for extracurricular activities. I’m sure they end up in a bar at some point. They keep evading their dick of a Drill Sergeant. Oh, I remembered Sean Young is in this movie. I assume she’s Bill Murray’s love interest (6). Anyways, Bill Murray’s group gets threatened with being sent to war or something, and so Bill Murray whips his team into shape (7). I’d bet he gives a pretty great speech.

John Candy plays the muscle of the group. Harold Ramis is probably the nerd, because that describes his entire acting career. Sean Young might be in the platoon as well. I think the army was co-ed back then. There might have been another love interest, because I’m hoping Harold Ramis and Sean Young end up together, but that’s mostly because there’s a bunch of eighties movies where the nerdy guys end up with babes, not least of which being Real Genius (8). Sean Young was probably a great sharpshooter or tech girl.

Anyways, this movie turns a corner when Bill Murray’s crew mistakenly gets hold of a high-tech army RV (9). They take the RV into a warzone somehow. Do they get overseas? Was America at war with Mexico in the eighties? Anyways: RV. Warzone. They end up in a hotly contested area and realize they are in the shit. Through some bumbling, and a rousing speech from Bill Murray, the group manages to “eff” some “ess” up and takes down some bad guys, and/or frees some good guys. The army recognizes this amazing achievement and reprimands their dick of a Drill Sergeant for not recognizing how awesome Bill Murray’s group is. The movie either ends with a “Who’s Who” montage or a “Where Are They Now?” montage (10).

1. Against type, as usual.
2. This required actual research. imdb did not list a last name.
3. There were no movies in the eighties where Bill Murray didn’t come out on top.
4. Company? Regiment? Platoon?
5. This is as much as I legitimately know. Everything from here on is the movie I think it is. I’m basically imagining an episode of Community. Wait, is Bill Murray’s last name Winger in this? Finally Community makes full sense to me.
6. On the ranking of 1980s babes-that-weren’t-actually-babes, Sean Young ranks above Sigourney Weaver but below Karen Allen.
7. To avoid…war? That doesn’t sound right. What else can the army threaten someone with? Push-ups, I guess. Maybe they were threatened with 1,000 push-ups.
8. Val Kilmer isn’t really everyone’s idea of a quintessential nerd though, but the main kid and the lady he ends up with always gave me hope as a young kid who identified most closely with Donatello and Egon Spengler.
9. Source: My college roommate’s DVD cover and that Community episode where the gang takes that KFC RV.
10. “Who’s Who” montages are in Top Gun, where it’s like “Tom Cruise as Maverick” and it shows Cruise smiling and taking his sunglasses off. “Where Are They Now?” montages are like in Can’t Hardly Wait, where it cycles through each character and tells the viewer what those characters did in the future.