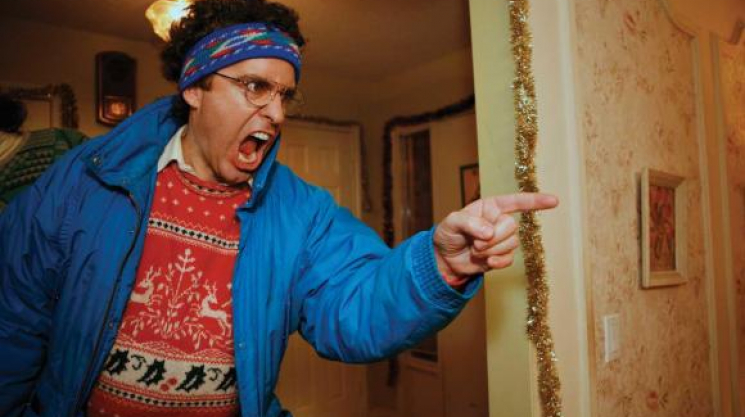 All too often with Canadian comedies you’re forced to say a movie is funny with the qualifier “for a low budget Canadian production.” Odd for a country that has a long track record of turning out some of Hollywood’s funniest and most successful comedians. This is not the case with Cooper’s Camera. True, it’s a low budget Canadian production, but it’s brilliant and funny, no qualifiers necessary. Starring The Daily Show wife-husband duo Samantha Bee and Jason Jones, along with Billable Hours star Mike Beaver, the film follows the most world’s most dysfunctional family on Christmas in 1985, all told from the perspective of the family’s handheld video camera.
Gord Cooper (Jones) lets his sex-obsessed neighbour (Kids in the Hall’s Dave Foley) pay back a debt by giving Cooper a used video camera, which in turn becomes the big Christmas gift for Cooper family. Gord’s wife Nancy (Bee) is not impressed, as she was hoping to get tickets to the greatest place on earth, Orlando. An already funny movie becomes the most dysfunctional family Christmas ever when the mullet and handlebar mustache-sporting Uncle Nick (Beaver), the Nigerian mail-order-bride-dating Aunt Joan and the estranged-for-17 years Uncle Tim all arrive. Fortunately for the viewer, the youngest of the two Cooper children takes hold of the camera and films the day’s events, which includes a lot of awful gift giving (a watermelon?) and an awful lot of drinking and fighting.

I had a chance to sit down with writer/stars Jason Jones and Mike Beaver, as well director as Warren P Sonoda, to talk about the film, Christmas and Dave Foley’s ass.

What made you guys want to do a low budget Canadian comedy?
Mike: Yeah, we really wanted to do that.
Warren: It was a very conscious choice. We could have done a big budget American blockbuster, but we were like “No, no, no, we don’t need anything more than $50 and this case of Canadian.”
Would a big budget have helped?
Warren: You know what it was? It was just expediency. Jason and Mike wrote the script and they asked if I’d like to make it. I said, “I’d love to, but it’s a Christmas movie and we have to do it in the winter.”
Mike: It had snow but we wrote into your script that it didn’t have snow. Because, even in Canada, you don’t know if it’s gonna snow anymore.
Warren: More importantly, with everyone’s schedules, I only had them for two weeks. So the reason why we decided to do it this way is because we could. There was no other way.
Mike: We lucked out because of the crew, the actors, how everyone just nailed every single take… we didn’t take too long on each scene. It was a tight schedule and we just lucked out. The stars aligned and everyone stepped up.

Why did you guys decide to take the handheld verité approach?
Jason Jones: It’s just how we wrote it. We decided on the format before we decided on the story. We were watching Mike’s home videos…. sorry, Mike was forcing us to watch his home videos and we were like, “Wouldn’t it be great if we took the best moments of all these videos and made a movie of that.” That was kind of the first idea. We talked about our similar stories, our Christmas stories, our birthdays and whatnot and combining elements that way.
Mike: Funny enough, some of the scenes in the movie are still from that original video tape. It was little moments, the sisters and the kids, the way they’re moving around and talking and cooking. The side you knew was real was what we translated into the script.
Jason: The story was the archetype of both our families. Two parents who shouldn’t be together… don’t print that.

Whose family is the story closest to?
Mike: I’d say mine.
Jason: Character-wise, it’s closest to Mike because he has two brothers. I had a brother and a sister. The core story really had nothing to do with our families.
Mike: The story was manufactured. On a normal Christmas, every family has a separate team. I don’t think it varies too much from family to family.

Jason, did you learn anything about your wife Samantha Bee by playing her husband onscreen?
Jason: I learned that if we ever get 10% of that couple in us, it’s time to break up. No. The question that comes up the most is, “They say you write what you know. Is this what you know?” For some reason I always write these doughty put-upon wives for Sarah to play… and that’s cuz she is.

Are you comfortable in a lead role, cuz normally you’re a supporting guy.
Jason: I like supporting roles. I like the roles that you do and are cut out before you even shoot them. My specialty is getting cast and then getting on plane to go shoot it and then them saying when you get off the plane, “Oh, we cut your role.” Those are the roles you want. No, it’s great. No one’s giving me any parts in Hollywood. Write it for yourself and come up here and do it.
Warren: That’s where Mike and Jason really took the bull by the horns. They weren’t waiting around for someone to give them a movie to do. It was out of that necessity to be creative. I’m glad we were able to do Coopers’ Camera because these guys should be in more movies… way more movies and they will.
Jason: As long as we write them.

Let’s talk about Christmas. What was your happiest Christmas moment ever? Or unhappiest?
Warren: My brother stayed up all week for me making this model war set. I was like 10 years old. My family gave that to me along with a Super-8 camera. So we made little movies.
Mike: Mine are more the sour memories. One Christmas that I felt terrible at, we woke up in the morning and my parents got us a bunch of gifts. But the big present they got us, there was always the one big present, was a VCR. My dad was trying to explain to us what it was cuz we didn’t really know what it was. “It’s a VCR!” My brother lost it. He was like, “This is awful. This is the worst Christmas ever.” It brought a real sour onto the whole day. Then we started watching movies.
Warren: He bought you movies?
Mike: He rented them. Of course he didn’t buy us movies.
Warren: They were like $100.
Jason: “Ninety-nine dollars! What the fuck?”
Mike: But that was the worst Christmas because my brother complained and whined and it was awful.
Jason: My best Christmas ever? Any Christmas I wasn’t beaten. My Dad liked to make, well they were happy jokes in the end but they were cruel jokes in the middle. I wanted a drum set really badly. It was exactly like A Christmas Story. Final present behind the tree and it obviously wasn’t a drum set. He pulls it out and it was in a big box and I was like, “Oh maybe it is a drum set.” I started opening it and there was another box inside. And another box inside. And another box inside.
Mike: Oh, that gag.
Jason: I got to the final box and it was just a little drum. He was like, “Sorry, I couldn’t afford it this Christmas.” I was like “Oh great, thanks.” I was miserable. Then he was like, “Hey come with me, I need you to help me get something in the basement.”
Mike: Awww…
Jason: And the drum set was downstairs.
Mike: That’s a father who loves you. My favourite Christmas is the one where my mom cut me a cheque for $200. And that’s a true story.
Jason: “Get some clothes, they’re terrible.”

Dave Foley has a remarkable ass.
Warren: It was for real. It was all him.

Was he very open to the idea of exposing his ass on screen?
Warren: He had no idea he was going to do nudity. He offered it. Mike and Jason wrote it in as this sex-obsessed neighbour. Dave’s the one that said, “If he’s sex-obsessed then he should be having sex, with no clothes on.”

Would it be fair to say then that Dave Foley offers the ass?
Mike: Yeah, he offers the ass.
Jason: It was actually contractual that he has to perform pants-less. It’s a weird thing.

What’s the best way to take a convincing punch in the nuts?
Mike and Jason: Tuck!

Was it difficult for you guys to act drunk for most of the movie?
Warren: There’s a lot of drinking in this movie
Mike: We’ve done it a lot. It’s not the easiest thing to act convincingly so it’s still funny and still gonna generate laughs, but still subtle enough that you buy it. That line me and Jason are on is a tightrope.
Jason: It’s also weird in this movie because we start sober, accelerate to 100, hunch over a bit, crash, then get up again. It’s six days of drinking crammed into 16 hours.
Warren: Being exhausted for the entire shoot helped people get into the zone of being trashed.

Are you guys all whiskey men?
Warren and Jason: No.
Mike: I used to collect the labels off the necks of Jack Daniels bottles and keep them in my wallet as badges of honour. “Look how much whiskey I’ve drank!” Like in high school you wanna be cool. “I’m a boozer. I’m gonna follow in my dad’s footsteps. I’m so cool I drink JD straight.” I used to think I was Keith Richards in high school for a bit.
Jason: But not the rock part.

There’s a lot of crude humour but I was never grossed out.
Mike: You’re a sick man.

Well, to give you an example, I saw the new Kevin Smith movie and there’s a scene where Jason Mewes, rather graphically, gets his face crapped on. And that just disgusted me.
Jason: We try to capture the scatalogical or gross-out humour in an actual scene. It was literally like, “Hey, we’ve got this really dramatic scene, wouldn’t it be funny if it was on the toilet?” Or he just told his son he’s a hermaphrodite as we’re sitting in front of a pile of puke after he just tried to kill himself with Lysol. Then he tries to clean it up with the Lysol he tried to kill himself with.
Warren: After I read the hermaphrodite Lysol suicide scene, I said I have to make this movie. If I shoot any one scene, this is the scene I do.

What are some tips on giving a really good gift to somebody for Christmas?
Warren: Give something that you wanna get so if they don’t like it you can just take it back.
Jason: Truthfully, it’s listening to my wife and I never do it. They drop hints all year. You just gotta listen. But now I have an iPhone so I can write them down immediately. I never used to do that. Listen. They do drop hints all year long and you just gotta collect those and go with one you can afford.
Mike: I’ve stopped doing it.
Jason: It’s just cash or a cheque?
Mike: No, no, no. My wife and I will go, “Christmas is coming up, do we wanna give gifts? Well we had that big dinner out last week so how about that was Christmas?” I get that from my family. Christmas was fucking cancelled at Thanksgiving in 1995.
Jason: Christmas is cancelled.