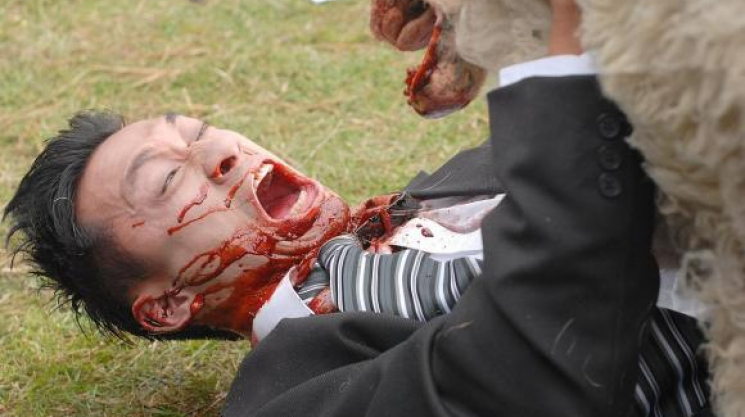 Every once in a while a film is made with a premise that’s so stupid it’s brilliant — Groundhog Day or Terminator for instance. Well step aside Bill Murray and James Cameron because a New Zealeander, Jonathan King, has just out stupided you with Black Sheep. You’ve never heard of him and neither have I. His background is in directing music videos for bands you’ve never heard of in a country I can’t find on a map. Here’s what I do know about New Zealand though:
1) They have a really good rugby team.
2) All the films I’ve seen from New Zealand focus on aboriginal (or ‘Maori’) issues and end with me wanting to slit my wrists because I’m so depressed.
3) The Lord of the Rings trilogy was shot there and it too made me want to slit my wrists. Not because it was sad but because I’m on anti-depressants and pretty much everything makes me want to kill myself these days (Don’t laugh that off. This article is a cry for help).
4) They have a lot of kiwi fruit and it’s cool if you refer to someone from New Zealand as a Kiwi.
5) Sheep are as abundant as kiwi fruit.

It’s that last pearl of knowledge which is the jumping point for King’s cinematic debut. Black Sheep is a horror comedy about genetic experiments at a farm that create a violent breed of flesh eating zombie sheep. King, who’s sitting across from me and somehow pulls off wearing a Hawaiian shirt, explains, “It’s the kind of film where you gotta buy into the ride. If you’re not buying into the ride, you might as well leave.” No shit. These sheep will kill you as soon as look at you and New Zealand has 40 million of them. To make it worse, if you’re a human and survive an attack but get bitten, you’ll turn into gigantic were-sheep that looks like a wooly orc.

The Lord of the Rings similarity is there because the WETA Workshop is responsible for all the monsters in the film. Also pitching in his animatronics knowledge was Dave Elsey—who’s best known for his work on Star Wars: Revenge of the Sith and the television show Farscape. The decision to go the animatronic route was a simple one. They’re broke and cheap CG looks like shit. But it’s more than that. King explains, “You know in your head that’s not real. But you see it and you buy into it. I think if it was a CG creature, it’d be much less cool. It’s that old fashioned thing. But it was state of the art old fashion.” To give you an idea of how state of the art, the were-sheep costume takes three people just to operate the face.

More ridiculous than a film about killer sheep is that King was able to trick his government into putting up cash for a film about killer sheep. It’s enough to make you want to move there when you see what kind of films our government is funding. But King knew he had a winner from the get go. “The germ of it just kind of arrived. I do remember going and staying on my step-father’s old family farm. We were driving up this farm road in the middle of the night. It’s totally black out in the middle of the country. The headlights hit these sheep and their eyes kind of glowed. And I thought ‘Wow, that’s kind of scary.’ A New Zealand horror film about sheep just kind of popped into my head as an idea that would work as a movie.” And it does work. Black Sheep has the potential to tap into a cultural ethos that could resonate with people outside of New Zealand, in the way that films like Four Weddings and a Funeral and My Big Fat Greek Wedding did. Except they’re trying to do it with killer sheep instead of cheap romantic comedy laughs.

Animatronic animal stillborns, were-sheep, gore, campy performances and a little hippy bashing to boot. You might be thinking this film has it all. But where Black Sheep falls short is bestiality jokes. Go drinking with some dudes from New Zealand and it won’t take long for sheep shagging jokes to rear their ugly and hilarious head. Sadly, Black Sheep only has one. It is a good one, but it’s pretty toned down. King has his reasons, “We knew it had to be there because it’s part of the mythology. One draft had the full on [makes a thrusting motion]. If you immediately cut to “BANG” full on humping it would have been bad. As it is now, people are thinking “They’re not gonna go there. OH THEY DID!” But people kind of laugh at it. We knew it had to be there but we didn’t want to go so far that it’d turn people’s stomachs.”

Black Sheep is as brilliant as a horror comedy with multiple fart jokes and an allusion to an act of bestiality can get. But before you write off the whole country as a bunch of sheep shaggers, King is quick to point out that “Most New Zealanders actually never see sheep. We all live in cities and there’s a tiny percentage of the population who are out there with sheep but all New Zealanders get it all the time. We’re kind of reclaiming it for ourselves. Whatever you can say about us, we’re gonna say it first…. Hopefully this film will deal with all that and we’ll never have to hear it again.” Whether his film has the power to heal the collective esteem of an entire country that’s reeling from being thought of as ‘sheep shaggers’ remains to be seen. What’s certain is Black Sheep will surely enter the canon of great New Zealand films… or at the very least, the canon of New Zealand movies people from North America have heard of.