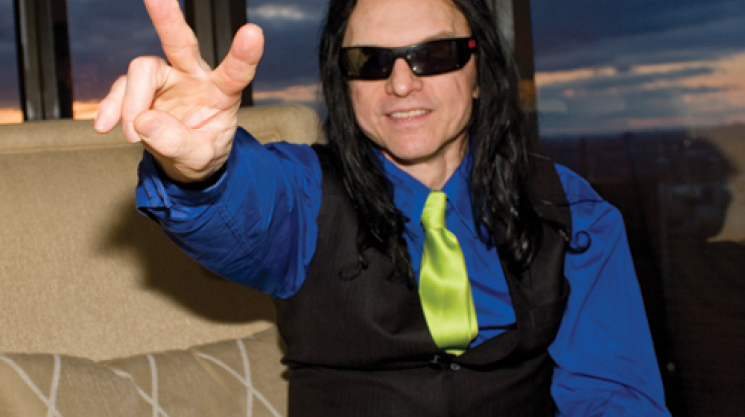 If you’ve ever seen The Room, a movie made back in 2003 yet still enjoying cult status to this day as one of the worst, or at least strangest movies ever made, you know that it’s kind of all over the place. Centered on the story of a love triangle in San Francisco, plot points are mentioned once and then dropped completely from the narrative, characters disappear mid-movie, and the apartment where much of the movie takes place is decorated with artistic spoon photography. That’s part of what makes it so strange; so nonsensical, so enjoyable. As I was trying to process the very surreal experience of having just interviewed the film’s director, writer, producer and star, Tommy Wiseau, a friend framed it for me this way: could anyone else have made The Room? And, after having just a twenty-minute conversation with him, I think it’s fair to say “no”.

The movie was released to a brief initial theatrical run in 2003 and then on DVD in 2005. Since then, it’s been played in smaller theatres across the world. These screenings, often monthly events, involve full audience participation. People dress up, sing along to the soundtrack, make jokes, and throw spoons and footballs around. For the past two years, Tommy Wiseau has been touring with his film, making personal appearances and holding Q&A sessions with the audience before screenings of the movie. I met with him the night before he and Room co-star Greg Sestero did a series of Q&As at The Royal theatre in Toronto as part of their current “Love Is Blind” tour.

What’s your favourite thing about touring with The Room?
It’s fun to meet the fans and have a groovy time, basically. [laughs] You meet a lot of people.

What do you like about having Q&A sessions?
I like to interact with people and have a groovy time as well, you know. People ask questions and each time it’s different, it’s not the same.

What do you hope your fans get out of it?
Well, anything they want to ask. Some people go overboard but that’s okay. I’m just like pro-freedom so they can ask whatever they want.

What do you get out of it?
I started [studying] psychology. I’m learning about human behaviour. I didn’t realize that The Room actually connects people. [It] is totally a different cookie cutter from Hollywood. You can do whatever you want, you have no restrictions. I’ve said this many times. You can laugh, you can cry, you can express yourself but please don’t hurt your children.

What do you think it is about the movie that draws people out for midnight screenings?
It just happened. I don’t know if it’s coincidence or some kind of destiny. Maybe destiny, that’s the word that I want to use. Midnight’s funny because you actually go out and you can see The Room, have a groovy time with friends, go to a bar, maybe have a couple drinks, whatever. You don’t have to see The Room with someone. You can go by yourself and maybe you meet somebody. In Los Angeles it’s very common that people go to The Room by one or maybe even meet some friends or talk to people, whatever.

How do you feel about the fan interaction? People dressing up? Does it excite you people get that into it?
I think it’s flattering. You create something from scratch like I did with The Room, and somebody dresses up, I think it’s complimentary. I have no issue with that except when people try to tamper with my project or try to use it as commercial value without telling us. That’s pretty unfair. But we have many fans that use it just for fun. I think I like that. It’s pretty cool.

How do you want people to view The Room in 10 years?
That’s a hard one. That’s a good question too. I like challenge. I would say probably it will be bigger, and maybe more people will actually understand The Room, because there’s a misinterpretation of The Room with many different media or bloggers, whatever we have there. And then I think sometimes it’s really unfair, because I believe in research, like everything else. The Room is by design. I designed it a certain way. It must be a different thing. And plus it’s based on 600 pages of my novel, by me. So it had already been written and condensed to 99 minutes of script.

How would you like them to understand it, though?
Well, first of all, I want people to enjoy themselves. That’s number one. And forget about me, forget the world, just say whatever you want, you have no restriction. You don’t offend me when you say “Oh I don’t like The Room, it’s boring” or whatever. I know it’s not boring. If I make you laugh a little bit, I think I’m doing a good job but it’s up to you. The more they laugh, the more fun they have, the better. [laughs]

What do you want people to take out of The Room in the end?
I like people to be a better person. That’s my accomplishment. And I think all filmmakers should entertain… this is my take, I cannot speak for someone else. If I strike you as a viewer and you say you can be a better person for another person, have a little better respect, I think I’m doing a good job. And that’s what I want people to remember, this is not fantasy, it’s a real thing that can happen to people. So if they be much more positive I would like that. I don’t know if I accomplished that but I got a lot of emails, thousands of emails, from across the world and it’s very positive. People say thank you.

I’ve read that you think there’s magnetism to The Room that attracts people to see it?
Absolutely.

Where do you think that magnetism comes from?
I think because it’s original number one and number two, I think it’s sincere. And I say this many times, you don’t have to like The Room, but if you’re sincere with your criticism, everybody would support this and embrace this, because it’s from your heart. But as soon as you try to bash somebody or be very disrespectful, that’s not right. My view about entertainment is the audience decides if they want to see your project. I’m just relaxed. Say whatever you want. You decide if you like it or not. But [we] have also a certain situation with The Room where people are spinning right or left but I say one thing. You know what? Sometimes, I’m sorry, you don’t know what you’re talking about. See negative is good, but when you’re not sincere, it’s not right. That’s what I believe. I look at it like Shakespeare or Leonardo Di Vinci or Lincoln or other people through history; you can see that these people have been very sincere with their productions or creativity. And that’s what I am about.

Sincerity?
I think so, yeah. I don’t say I think so, I’m pretty sure I am. Because I want to be real, I don’t want to be phony. Like all plastic, you know? I believe very strong if you share something like that, people will embrace.

You mentioned before how you observe human behaviour and study psychology?
Yeah.

Do you consider yourself an observer of behaviour?
Good question, I commend you again. I did this study, before I shot The Room. I interviewed people on the street, and I asked them questions about relationships and I discover, wait a minute, I’m so blind. You go to school you read all these books but it’s different when you’re actually doing your own research. And I interview some people on the street and I say, “Wait a minute, it’s not me who has a problem. We all have our problems.” And that’s why I say, The Room, you can compare it to, for example, the character of Lisa, you can compare Lisa to Cleopatra for example. I encourage people to see that.

Is that what The Room is about to you? Exploring human behaviour?
Absolutely. Again, how much you can love someone, directly, indirectly. Is it for money, is it for feelings? You go to certain level of relationship, and it’s okay to be honest or dishonest. We as a human, generally speaking, we’re very greedy people, we rarely think objectively. So we want everything to go our way but then we may forget about the other, our environment, or whatever you have there.

Do you think The Room will be your legacy?
You said it, I didn’t. That’s a good statement. I accept it, if that’s what it will be.

So you’re okay with it?
Absolutely. I say to somebody also, I think last year, “I will always be connected to The Room”. I’m proud of my project. This is the best project that I have, even though it’s my first project. [laughs] Actually, you know what, it’s the second project, because I did a sort of short movie for the school on super 8, and I did everything from scratch. But, I’m proud of my project. I’m very proud that I was stubborn. I was very proud that I did not pitch in to big studio even though I had a great respect for them. I’m proud of this stuff, to be honest with you. It was a rollercoaster ride. It was difficult, extremely difficult. Actually, to be honest with you, difficult is not the word. Super extremely difficult.

Well, TW is great. What a story Mark!