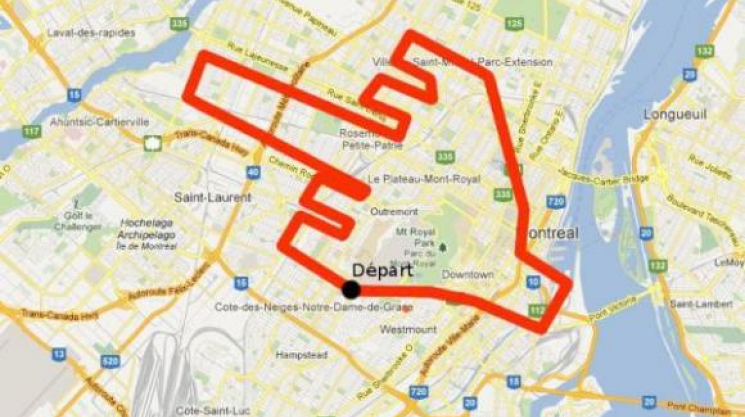 Under the Paving Stones

One hundred and something days, everyone. We’re into it now, whatever the fuck this has become. The people in the streets, banging away on pots and pans are going viral. Buzzfed to the world’s eyeballs – a meme direct from the barricades of Quebec, the Montreal mayhem of tin noise and, if nobody's careful, a dangerously hollowing sense of purpose. Just an emptying pot, banging away. This was about the tuition. Or about the general theme of a government so broke it can’t even pay itself to make the corruption go away. It was something like that. But anyway, to the streets. In droves and with bricks if that's what it takes.

There is, of course, that question of debt, and the fact that everyone has it. Student debt. Government debt. Let’s talk about the debt, the right-now debt and the future debt, and when we want to pay it off and who might be in a position to do that, either now or then, and when do we start doing it. And, of course, who we owe.

The New York Times noticed. The Guardian, Le Monde. It’s out there. And in English Canada, too, in case that mattered, but it probably didn’t so forget it. Anyway, we’re all talking about it now, and we’re listening intently to the cacophony of a city. And here come the opinions, and it’s that last point from before that sticks out: Who everybody owes and what it is exactly they owe them. Because, it seems, it’s a problem of entitlement – of ownership and loans and living off what someone else gave you. There are just too many entitled people. Young entitled people. Old entitled people. Entitled leaders. Entitled followers. Everyone wanting what they’re convinced is their right to have, no matter what it costs someone else to provide. OK, fine. But do we know what any of it is actually worth. The perfect consumerist hellscape to ponder over the breakfast cereal. Looks interesting. Chew, chew. Swallow. What's on the sports page?

The news comes on a calm weekend. A student leader hints to the CBC there might be room for negotiation again. The last one didn’t go so well, but this time it could be different. There’s room for some lateral movement, starting probably with that law that has everyone foregoing dinner for a few minutes to use the casserole dish as a marching drum. Law 78, the constitutional headache, has actually opened up this breathing space. Capture ground and then look compromising when you give it back and normalcy returns. Strategy by blunder or something. Oh hell, here they come. The hoards again. Forget it. Maybe let’s just kettle the fuckers and call it a night.

If only it weren’t so loud. Then maybe we could get to the heart of what this is still about and what it is everyone wants. It might be too much to ask now, anyway. It might be too late. We might have passed that point tens of days ago, before the Laurentians started bottling in that early summer heat, pressing it against the Saint Lawrence wet; when hockey games still had people thinking twice about straying too far from home to shout at anything but an HD hookup and a bowl of Tostitos. Before anyone could start specializing in a new kind of adopted frustration. But the papers and the internet and the talking heads have it now, and they're still out there every night marching, so we have to listen for a bit longer, leaning in close, past the hyperbole to the beating heart of the spectacle, just to see if there’s any logic left doing any of the pounding.

It’s just so hard to hear, above the din, that heart of the issue – the truth of what this is and what it means. There’s something there, probably, that we need to talk about. Something about the value of an education, the value of affordable knowledge, and the value of a generation of minds not thinking all the time about money, unless maybe they’re being paid to do it. Something maybe more about the nation's youth prematurely fatigued, suffocating from a tightened belt. Or maybe there was really none of that ever, and it was mostly about the noise. Whatever it was, it’s being drowned out by the spectator mouths in the streets and behind the desks that have absorbed too much, swallowed too deeply. And now they puke what’s left into a dogmatic game of rhetorical winners and losers. The barfed ideology of a fevered, diseased discourse pleading for a salient solution. Negotiation and compromise and breathing room. Good luck with all of that.