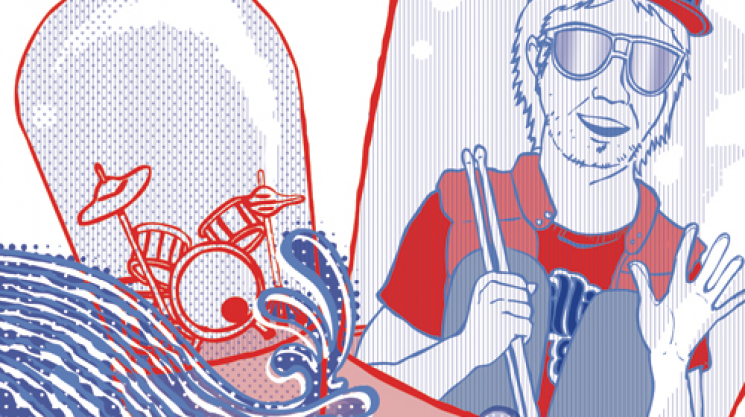 BEST OF THE WURST

Twenty years ago the Kids In The Hall started a movement where comedy acts could gain a devoted following that at the time was reserved for bands. The Toronto quintet did so by hiring Shadowy Men On A Shadowy Planet as their house band; by combining their respective cult followings they both were a force never before seen. You can still find that influence every time you see David Cross in an indie rock video or hear MIA in the trailer for Pineapple Express. One man, Jon Wurster, is putting his money on both red and black. His list of accomplishments seems endless: Drummer for the legendary Superchunk, writer for the absurdist Tim and Eric Awesome Show, member of the darling Mountain Goats, and the man behind beloved character Philly Boy Roy. Sit in a record store and talk with him about the music of the Dead Milkmen and the hilarity of Bob Odenkirk and things may get a little Foolish.

What makes The Best Show the BEST show?
Tom Sharpling is the host and the founder and I’ll call in as characters whenever I can. I’m on the road all the time so it’s usually from a parking lot of a club somewhere. It’s on WFMU in Jersey City, New Jersey, and it’s the biggest free-form station in the States. It’s listener supported so we can kind of do whatever we want. He started playing a lot of music but eventually over the years it has grown into this thing where it’s mainly him talking and taking calls. There’s a whole legion of regular callers from all over the world and I’ll call in whenever I can as a character. Anything goes, which is very rare nowadays.

Is Philly Boy Roy based on an amalgam of people or on one awesome Bobby Clarke fan?
It’s a bunch of people I grew up with. But yeah that era of Bobby Clarke and the Flyers and Dave Shultz and those guys, that’s definitely ground zero for the inspiration.

Tom Green says he hates Rush because that’s what the guys who used to beat him up when he was a kid in Ottawa used to listen to. Is Philly Boy Roy based on the guys who were your pals or were they your nemeses?
They weren’t people I had any close relationship with. They’d be people that I worked with when I got out of high school in a factory. I worked in a toothpaste factory and a record pressing plant. So there were these guys who would come up from Philadelphia and this job was in a town called Doylestown, which is kind of near the Jersey/Philly border. So these guys would come up from the city and they were from this area called Fishtown, which is hardcore white trash.

Take me through how the hell one writes for the Tim and Eric Awesome Show.
Well Tom and I co-wrote four or five episodes for their first show which was called Tom Goes To The Mayor. One night Tom played me some episodes and we both loved it. He was an early champion of that and a real early champion of Aqua Teen Hunger Force. I guess we got our CDs to Tim and Eric and they’re actually Philly guys. They liked the stuff and asked us to come out to California for a weekend to come up with some ideas. I wrote about 25-30 two line ideas and they picked only one. It was this one where Bob Odenkirk plays a magician who will make your magic trick snazzier and it’s called “Trick Your Trick.”

Superchunk has a new album and it’s not shitty like the new OMD album. How did you pull that off?
I didn’t think there was any pressure at all from my end. It was probably the easiest record of ours that I’ve ever been involved in. We never really stopped playing. We always had songs we were working on but it got to the point where it was like, if we’re gonna keep doing it, let’s make an actual record. I don’t think any of those songs I had ever actually played at a drumset until the two days before we actually recorded them… which made it super fresh. Your first idea is your best idea and you go with that.

Yourself and Tom Sharpling recently hosted the 21st anniversary Matador records party in Las Vegas with a very deep lineup of Matador bands. What’s Vegas like when it’s being over run by Belle & Sebastian fans?
I’d never been there before in my life! And I actually sat next to [Belle & Sebastian] on the flight there. I kind of kept to myself a lot that weekend so I didn’t get the full experience… but by choice. It was all in this one hotel and everywhere you took a step there was indie rock. There were indie rock people, but there were also “normal” people too who were there to gamble.

You and Mojo Nixon have a jumping off point if you meet. What is it? Dead Milkmen?
Name checked in a Dead Milkmen song. That’s true! Yeah!

How old were you when they name checked you in a song?
I was older than you think. Their record came out in 1988, I think, so I was probably 22.

Is it a line about you delivering papers?
I think it’s “that Jonny Wurster kid who delivers papers in the neighbourhood. People say he’s on crack.” I was thrilled and mortified when I heard it the first time. I had no idea it was coming. I bought the record when it came out and had no idea I was on it