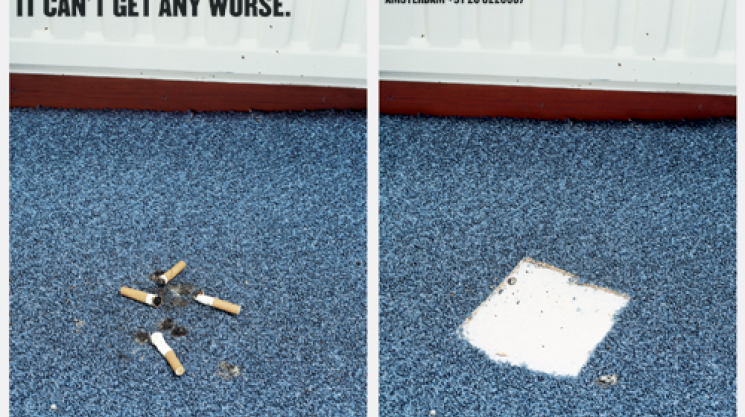 RARELY DO HOTELS INTENTIONALLY WORK TO ASSOCIATE THEMSELVES WITH FECES AND ILLNESS, BUT AMSTERDAM’S HANS BRINKER BUDGET HOTEL IS NO ORDINARY HOTEL.

Billed as “The Worst Hotel In The World”, the Hans Brinker brand, developed for over 15 years by Dutch advertising agency KesselsKramer, is an exercise in counter-intuitive marketing. As you know, the modus operandi of most advertising is to tell lies about the product being pitched. KesselsKramer wanted to try something different with Brinker, so they created their campaigns for the hotel under a doctrine of “extreme honesty”.

The campaigns have been, to say the least, terribly successful. The Hans Brinker boasts an 80% room capacity even during the low season, and has gained global repute for being shit. But is it really all that bad? Or is it just extraordinarily clever advertising? I recently had a two-day layover in Amsterdam and I wanted to know for myself, so I went and experienced it firsthand.

When I arrived I was admittedly naïve. I thought the staff’s piss-poor attitude was tounge-in-cheek, just another bit of the great Brinker pantomime. After being told that there actually was no wi-fi, anywhere, and no, it wasn’t a joke, I thought, “Okay, these guys are going the distance; I respect that.” There really are no amenities, save for a beer machine, a pub and a “night-club”, which was essentially a basement painted black and lit with a few flashing coloured lights. But at least they had a couple computers in the common area I could use to check my email, right? Wrong. The computers I was directed to had been broken for at least five years, in fact, they didn’t even look like real computers.

I poked my head in the night club and it was menacing, its only patrons were a lone group of eastern Europeans sitting in the corner glaring at each other. So I spent my first night in the hotel pub, drinking draft beer and failing to strike up a conversation with any of my fellow guests. After a few hours I stumbled back to my tiny room and went to sleep.

I can’t explain why, but I somehow managed to sleep through the entire day and when I awoke it was dark outside. Worst of all, I was damp, the bed was damp, and all my clothes were damp. At first I thought I had pissed myself, but realized it was the hotel. The dampness of the Brinker had crept inside my room and walked all over me. Far from amusing, the novelty of the hotel’s in-joke now felt depraved.

On my second night I planned to go bar-hopping, but it was pouring rain outside and I was starting to catch a bit of a cold so I spent another night in the pub.

That night was a bit different. The pub was filled with 40 or so British art students who had come to the Brinker on a field trip for a design class. But it didn’t make it better, it made things worse. The Brinker had already infected me. I tried chatting up a few girls and they looked at me like I had been struck with a case of flash-leprosy.

I slept in again, and woke up damper than the day before. My camera stopped working and it looked as if one of the maids had come in and rifled through my belongings while I was asleep. I had an evening flight so I packed my belongings and spent the rest of my evening at the airport.

No, the Hans Brinker isn’t the worst hotel on Earth. It’s something far more dreadful and profound – a concept that verges on becoming an uncanny work of art. After returning home from my time in Amsterdam, wherein I experienced absolutely nothing that great city has to offer, there was a certain indistinct residue left by the experience, a stain that I’ve yet to scrub off.