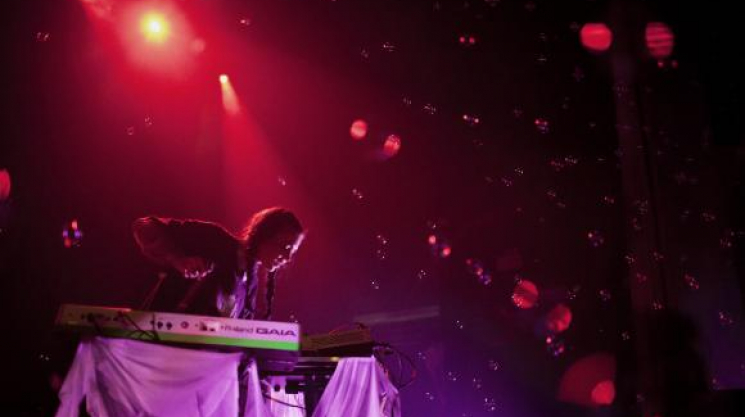 Two young women wrapped in plastic jumped out onto the stage and took their place at their stations, as thrilled as their audience to be there. Moments later out comes Vancouver-born, Montreal-bred Grimes, glowing, hungry, ready to do her thing, to be herself. As Grimes, Claire Boucher creates a transfixing, complete world of audio-visual wonder (along with her music, Grimes directs her own music videos) and she brought it all to Club Soda at POP Montreal.

The two women (from opening band Myths) sang backup, bounced around, and occasionally made noises by pushing buttons. Soon after, four men, “back up dancers,” took the stage. One was wearing a housecoat, one was dressed as Beetlejuice, and the other two spent the duration of the set stripping down to their white briefs. There was no synchronized dancing; at times, the men just stared at the audience. Throughout, the John Waters movie Pecker played. This wonderfully absurd scene is the house that Grimes built, and though it can seem overdone, it all hangs together perfectly. Through it all Grimes acts as conductor and orchestra, general and army.

“Vanessa,” “Genesis,” “Oblivion” all brought the audience to a fever pitch, crowd surfing, dancing as one, the room a dizzied haze. Even with all of the distractions, it’s impossible not to watch Grimes, to be enamored with her stage presence. Singing, looping what she just sang and then making it into something completely different, using her various instruments and all the while with a pleased smile, knowing she’s making people happy. There is a spatial quality to her work; layers are built upon layers, songs open out and then contract. The set never lagged, never sagged, people just kept wishing it wouldn’t end, and when it finally did, all anyone could do was be happy that they were there.